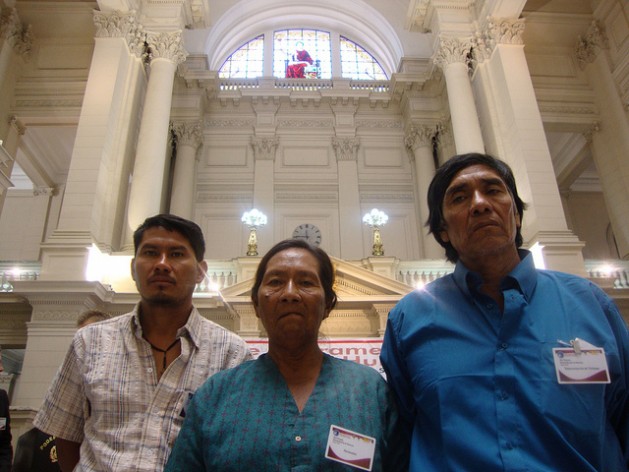 WASHINGTON, Sep 18 2014 (IPS) - Starting next year, a new grant-making initiative will aim to fill what organisers say has been a longstanding gap in international coordination and funding around the recognition of community land rights.

The project could provide major financial and technical support to indigenous groups and forest communities struggling to solidify their claims to traditional lands. Proponents say substantive action around land tenure would reduce growing levels of conflict around extractives projects and land development, and provide a potent new tool in the fight against global climate change.

“Yes, the forests and other non-industrialised land hold value. But we must also value the rights of those who inhabit these areas and are stewards of the natural resources they contain." -- Victoria Tauli-Corpuz

The new body, the International Land and Forest Tenure Facility, is being spearheaded by the Rights and Resources Initiative (RRI), a Washington-based coalition, though the fund will be an independent institution. The Swedish government is expected to formally announce the project’s initial funding, some 15 million dollars, at next week’s U.N. climate summit in New York.

“The lack of clear rights to own and use land affects the livelihoods of millions of forest-dwellers and has also encouraged widespread illegal logging and forest loss,” Charlotte Petri Gornitzka, the director general of the Swedish International Development Cooperation Agency, said Wednesday.

“Establishing clear and secure community land rights will enable sustainable economic development, lessen the impacts of climate change and is a prerequisite for much needed sustainable investments.”

As Gornitzka indicates, recent research has found that lands under strong community oversight experience far lower rates of deforestation than those controlled by either government or private sector entities. In turn, intact forests can have a huge dampening effect on spiking emissions of carbon dioxide.

This is a potential that supporters think they can now use to foster broader action on longstanding concerns around land tenure.

National governments and international agencies and mechanisms have paid some important attention to tenure-related concerns. But not only have these slowed in recent years, development groups say such efforts have not been adequately comprehensive.

“There is today an unprecedented convergence of demand and support for this issue, from governments, private investors and local people. But there remains no dedicated instrument for supporting community land rights,” Andy White, RRI’s coordinator, told IPS.

“The World Bank, the United Nations and others dabble in this issue, yet there has been no central focus to mobilise, coordinate or facilitate the sharing of lessons. And, importantly, there’s been no entity to dedicate project financing in a strategic manner.”

According to a study released Wednesday by RRI and Tebtebba, an indigenous rights group based in the Philippines, initiatives around land tenure by donors and multilaterals have generally been too narrowly tailored. While the World Bank has been a primary multilateral actor on the issue, for instance, over the past decade the bank’s land tenure programmes have devoted just six percent of funding to establishing community forest rights.

“Much of the historical and existing donor support for securing tenure has focused on individual rights, urban areas, and agricultural lands, and is inadequate to meet the current demand from multiple stakeholders for secure community tenure,” the report states.

As of last year, indigenous and local communities had some kind of control over around 513 million hectares of forests. Yet governments continue to administer or claim ownership over nearly three-quarters of the world’s forests, particularly in poor and middle-income countries.

From 2002 to 2013, 24 new legal provisions were put in place to strengthen some form of community control over forests, according to RRI. Yet just six of these have been passed since 2008, and those put in place recently have been relatively weaker.

Advocates say recent global trends, coupled with a lack of major action from international players, have simply been too much for many developing countries to resist moving aggressively to exploit available natural resources.

“Yes, the forests and other non-industrialised land hold value,” Victoria Tauli-Corpuz, the United Nations’ special rapporteur on indigenous peoples and a member of the advisory group for the International Land and Forest Tenure Facility, said in a statement.

“But we must also value the rights of those who inhabit these areas and are stewards of the natural resources they contain. Failure to do so has resulted in much of the local conflict plaguing economic development today.”

Experts say the majority of the world’s rural lands remain both unmapped and contested. Thus, the formalisation of land tenure requires not only political will but also significant funding.

While new technologies have made the painstaking process of mapping community lands cheaper and more accessible, clarifying indigenous rights in India and Indonesia could cost upwards of 500 million dollars each, according to new data.

Until it is fully up and running by the end of 2015, the new International Land and Forest Tenure Facility will operate on the Swedish grant, with funding from other governments in the works. That will allow the group to start up a half-dozen pilot projects, likely in Indonesia, Cameroon, Peru and Colombia, to begin early next year.

Each of these countries is facing major threats to its forests. Peru, for instance, has leased out nearly two-thirds of its Amazonian forests for oil and gas exploration – concessions that overlap with at least 70 percent of the country’s indigenous communities.

“If we don’t address this issue we’ll continue to bump into conflicts every time we want to extract resources or develop land,” RRI’s White says.

“This has been a problem simmering on the back burner for decades, but now it’s reached the point that the penetration of global capital into remote rural areas to secure the commodities we all need has reached a point where conflict is breaking out all over.”

The private sector will also play an important role in the International land and Forest Tenure Facility, with key multinational companies sitting on its advisory board. But at the outset, corporate money will not be funding the operation.

Rather, White says, companies will help in the shaping of new business models.

“The private sector is driving much of this damage today, but these companies are also facing tremendous reputational and financial risks if they invest in places with poor land rights,” he says.

“That growing recognition by private investors is one of the most important shifts taking place today. Companies cannot meet their own growth projections as well as their social and environmental pledges if they don’t proactively engage around clarifying local land rights.”