Bill Miller is the accredited Washington International journalist covering the U.N. and is the producer/moderator of Global Connections Television. The writer can be contacted at: millerkyun@aol.com 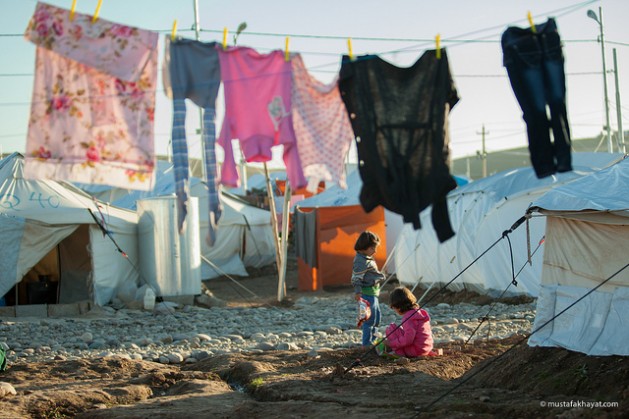 Since Aug. 3, there has been a massive dislocation of some 200,000 people from Iraq, resulting in more than 1.2 million displaced. Credit: Mustafa Khayat/CC-BY-ND-2.0

NEW YORK, Sep 4 2014 (IPS) - The catastrophic events in Iraq that are unfolding daily are more significant than at any point in recent memory.

The Islamic State of Iraq and Syria (ISIS), which is now calling itself the Islamic State (IS), steamrolled out of Syria into Iraq and appeared to be unstoppable in its march to Baghdad. The Iraqi military, which was far larger and better armed, was either unable or unwilling to confront this ragtag, but determined, force of about 1,000 fighters.

Simultaneously, the world was riveted on the minority Yazidi community that had to escape to Mount Sinjar to avoid certain annihilation.

What made the situation even more dangerous was that Mount Sinjar is a rocky, barren hilltop about 67 miles long and six miles wide, protruding like a camel’s back with a daytime high temperature of 110 degrees, as Kieran Dwyer, communications chief for the U.N. Office for the Coordination of Humanitarian Affairs, recently reported from Erbil.

— Since Aug. 3, there has been a massive dislocation of 200,000 people, as armed groups have ramped up their violence, and there are more than 1.2 million displaced people.

— The U.N. High Commission for Refugees is providing protection and assisting local authorities with shelter, including mattresses and blankets.

— The U.N. World Food Programme set up four communal kitchens in that Governorate and has provided two million meals in the past two weeks.

— The U.N. Children’s Fund (UNICEF) has provided drinking water and rehydration salts to help prevent or treat diarrhea, as well as provisions of high-energy biscuits for 34,000 children under the age of five in the past week.

— The U.N. Population Fund (UNFPA) is supporting over 1,300 pregnant women with hygiene supplies and helping local authorities with medical supplies to support 150,000 people.

While returning from South Korea, Pope Francis sanctioned intervening in Iraq to stop Islamist militants from persecuting not only Christian, but also all religious minority groups.

This is a dramatic turnaround, given that the Vatican normally eschews the use of force. His caveat was that the international community must discuss a strategy, possibly at the U.N., so that this would not be perceived as ‘a true war of conquest.’

Shortly thereafter, French President Francois Hollande called for an international conference to discuss ways of confronting the Islamic State insurgents who have seized control of territory in Iraq and Syria.

Both suggestions tie directly into U.S. President Barack Obama’s intention to preside over a meeting of the United Nations Security Council during his attendance at the world body’s annual General Assembly meeting in mid-September.

Specifically, Obama’s agenda will focus upon counterterrorism and the threat of foreign fighters traveling to conflict zones and joining terrorist organisations.

Additionally, all major players in the region, even ones that have had a traditional animosity to one another such as Iran vs. Saudi Arabia and the U.S., must be at the table.

It is critical to remember that a major reason for the disasters occurring in many areas of the Middle East can be traced directly back to the misguided and widely-viewed illegal invasion of Iraq by former President George W. Bush in March of 2003.

Allegedly, the U.S. went to Iraq to disarm Saddam Hussein of weapons of mass destruction (WMD), which did not exist.

When the bogus WMD argument collapsed, the rationale quickly moved to regime change and then to establishing democracy in the Arab world.

The real reasons were to control the oil fields and re-do that area so it could be manipulated by Western interests.

In reality, the legacy of the biggest U.S. foreign blunder in history left Iran as the powerhouse in the region, converted Iraq into a powder keg for conflict among the Sunnis and Shias, got 200,000 Iraqis and over 4,000 U.S. military personnel killed, and gave the American taxpayer a bill for two trillion dollars, which is a figure that will continue to rise because of the thousands of troops that will need medical and psychological assistance, as well as Iraq requesting financial, military and technical assistance in the future.

Tragically, some media outlets, such as Fox News and many right-wing talk radio stations, are putting the same purveyors of misinformation and disinformation – such as former Vice-President Dick Cheney, former Deputy Secretary of Defense Paul Wolfowitz, U.S. Administrator in Iraq Paul Bremer, Senator John McCain and Bill Kristol – back on the air to re-write history on how the Iraq War was really a glowing success.

In a democracy it is critical to have a cross-section of ideas and stimulating debate on Iraq and other issues, but it is questionable and foolish to heed the advice of such a devious and counterproductive group that adheres to the nonsensical tenets that if only the U.S. had stayed longer, left more troops or invested more blood and treasure in that region, there would have been a positive outcome.

They refuse to recognise that neither the Iraqis nor the Iranians wanted the U.S. to stay, and the American public was turning against a failed war.

Couple that with the fact that former Iraqi Prime Minister Nouri al-Maliki tried to isolate the Sunnis from any power-sharing or involvement in the political, financial and cultural facets of Iraq.

From the despicable beheadings of freelance photographer James Foley and freelance journalist Steven Sotloff, to the imposition of draconian Sharia Law that violates human and civil rights, the challenges in Iraq are multiplying daily.

Probably no one in the world knows this better than U.N. Secretary General Ban Ki-moon who said recently, “… I can bring world leaders to the river, but I cannot force them to drink.”

When the leaders of the world meet later this month at the U.N., it will be time for them to ‘drink the water’ for everyone’s benefit.