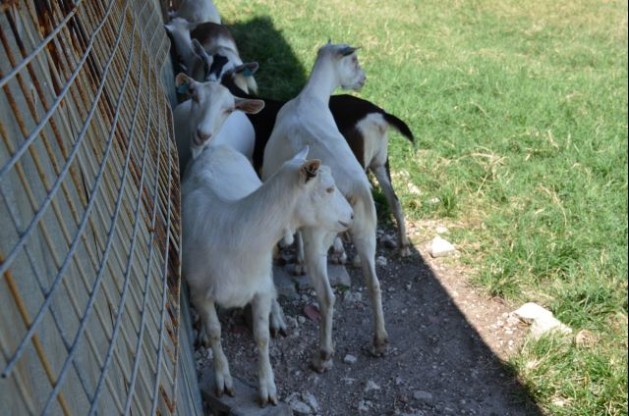 These goats in the Caribbean seek out shade in a bid to ward off heat stress that is driving up livestock mortality rates in the region. Credit: Cedric Lazarus/FAO

PARAMARIBO, Suriname, Oct 8 2014 (IPS) - Livestock farmers in the Caribbean are finding it increasingly difficult and expensive to rear healthy animals because of climate change, a situation that poses a significant threat to a region that is already too dependent on imports to feed its population.

Norman Gibson, a livestock scientist with the Caribbean Agricultural Research and Development Institute (CARDI), says the effects of climate change mean that farmers must spend more money on feedstock to produce healthy animals, as well as coping with higher mortality rates among their flocks due to heat stress.

Once an animal’s core body temperature goes above 45 degrees Celsius, its homeostasis is disrupted, eventually leading to death. So Caribbean farmers are now investing in ventilation systems to keep their livestock cooler.

Gibson was part of a panel discussion at the Technical Centre for Agricultural and Rural Cooperation (CTA)’s Caribbean Week of Agriculture (CWA), being held in Paramaribo, Suriname, Oct. 6–12. The annual event hosted by the CTA focused on promoting policies and practices that will help farmers to adapt to climate change.

Gibson pointed out that decreases in livestock production would have a significant impact on the Caribbean region, where meat forms a major part of the diet. The region imports 40 million dollars worth of meat annually from New Zealand and Australia, he told the audience, and “imports are growing faster than [local] production.”

At the same time, research has shown that climate change is resulting in higher levels of CO2 in the atmosphere which “leads to changes in the nutritional status of plants”, he told IPS. He said that tropical grasses are not the most nutritious, and with increases in CO2 they become even less so.

“So animals would have to eat even more to get an acceptable level of nutrition. Because that is often impossible, if you want your animals to produce at a certain level you have to supplement with concentrated feed, which in the Caribbean is imported,” he told IPS, and expensive.

He added that in places like Guyana, that are below sea level and sinking further, salt water intrusion is further compromising the feedstock available for ruminants.

“Once salt water gets into pastures, most of the grass that we currently grow is not adapted to high levels of salts. Most of these grasses have low salt tolerance and therefore will not thrive or grow under those conditions. So scientists will now have to find new breeds of grass that are more tolerant,” he said.

He said a breed of grass from International Centre for Tropical Agriculture in Colombia was showing promise in Trinidad and Tobago, Jamaica, Barbados and St. Kitts.

“A lot of the dairy production in Trinidad and Tobago is based on that particular grass…In St. Kitts, it is now the major grass of choice for small ruminant farmers.”

He also pointed out that temperatures were for a certainty increasing, though there was less certainty about increased precipitation. These higher temperatures lead to heat stress in animals that reduces their ability to reproduce.

Heat stress is leading to levels of mortality of up to 15 per cent among ruminants, the FAO’s Cedric Lazarus told IPS. Lazarus was also at the CWA and spoke of efforts being made around the region to reduce the heat stress being suffered by animals.

He explained that once an animal’s core body temperature goes above 45 degrees Celsius, its homeostasis is disrupted, eventually leading to death. So Caribbean farmers are now investing in ventilation systems to keep their livestock cooler, he said.

“It’s the only way you can keep those high-producing breeds of cattle and ensure they survive.” He said the use of ventilation systems was seen particularly in Barbados.

Planting more trees was also a viable—and simple—way of providing more shade for animals, he added.

He said studies showed heat stress also led to a precipitous decrease in milk yields, sometimes by as much as 33 percent, thus reducing the animal’s profitability.

Gibson added that because of the extreme heat the region has been experiencing and the resulting discomfort felt by animals, there were abnormalities in their sperm and a fall-off in vigour resulting in reduced conception rates.

“A livestock farmer’s success depends on how many animals he can get to the market each year, which is a function of how well his animals reproduce,” he told IPS.

Both Gibson and Lazarus said the impact of climate change meant that farmers would have to rely more on local breeds of ruminants to ensure they have hardy stock that can cope with the region’s increasingly intense heat, though there has been a tendency over the past 15 to 20 years to bring in foreign breeds to “improve” local livestock.

Farmers often see foreign livestock as a chance to improve their herd because it means introducing fresh blood without the problems that traditionally come with inbreeding, said Rommel Parris, a black belly sheep farmer and president of the Barbados Sheep and Goat Farmers Association.

However, Parris said, the benefits of a new genetic pool do not outweigh the disadvantages of the foreign stock in the hot Caribbean climate.

“Your cost goes up because you have to keep them in air-conditioned rooms or use fans to cool them down. You have to feed them with special feeds. You have to adjust to the diet they were receiving before. Caring for these animals is tougher than caring for those animals that are adapted to this region for years,” he told IPS.

He added that foreign stock tend to produce fewer offspring, as well, than the local breeds, and are more susceptible to the parasites in the region.

Though inbreeding of local stocks does bring a somewhat weaker herd, “farmers know how to treat their own animals. A lot of them are proactive and know what the signs are and how to prevent sickness in advance…They can pick up on them fairly quickly,” he said, thus reducing mortality rates and losses.

The majority of ruminants in the region are still the local, creole animals, Lazarus said, but the Caribbean needs to guard against the mistake made in other parts of the world, where the introduction of foreign breeds led to the extinction of local, more sustainable animals.