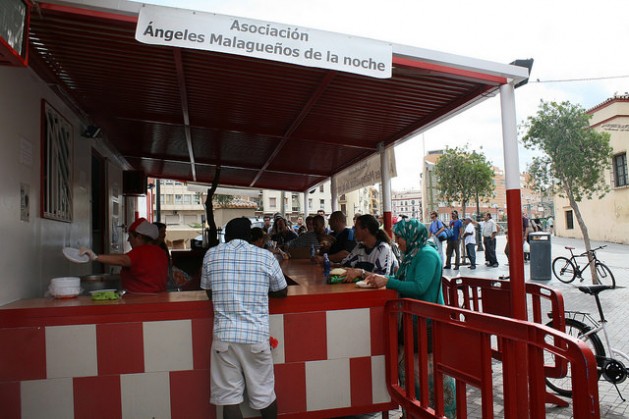 MÁLAGA, Spain , Oct 28 2014 (IPS) - “It’s easy to end up on the street. It’s not because you led a bad life; you lose your job and you can’t afford to pay rent,” says David Cerezo while he waits for lunch to be served by a humanitarian organisation in this city in southern Spain.

Cerezo, 39, lives in a filthy wreck of a house in downtown Málaga with two other people. He used to work as a baker and confectioner but his drug abuse ruined his life, and separated him from his wife and his 36 and 39-year-old brothers.

Now he is determined to undergo rehabilitation, he tells IPS in front of the lunch counter of the Ángeles Malagueños de la Noche (Málaga Angels of the Night) association.

“Most of those who ask for food here have ended up on the street because of drugs or alcohol, but there are also parents coming for food for their kids, and very young people,” he says, pointing towards the dozens of people lined up under the midday sun for a plate of rice, which is steaming in a huge pot.

Spain’s long, severe recession and high unemployment rate, which currently stands at 24.4 percent according to the national statistics institute, INE, have impoverished the population while government budgets for social services for the poor have been cut.

“On the street I feel vulnerable, so inferior. You lose your dignity and it’s hard to get it back. I want out of this.” -- Miguel Arregui

According to statistics from earlier this year, between 20.4 and 27.3 percent of the population of 47.2 million – depending on whether the measurement uses Spanish or European Union parameters – lives below the poverty line.

Nor does having a job guarantee a life free of poverty. The crisis drove up the proportion of working poor from 10.8 percent of the population in 2007 to 12.3 percent in 2010, according to the Dossier de Pobreza EAPN España 2014, a report on poverty in Spain by the European Anti Poverty Network.

Even worse is the fact that 27 percent of the country’s children – more than 2.3 million girls and boys – live in or on the verge of poverty, according to the United Nations children’s fund, UNICEF.

A study published Sept. 19 by the Association of Directors and Managers of Social Services reported that public spending on the neediest this year was 18.98 billion dollars – 2.78 billion less than in 2012.

“You find yourself in the street because you don’t have anyone to turn to,” said Miguel Arregui, 40. “And once you’re there it’s really hard to take flight again.”

The tall, black-haired Arregui, who is separated and has an 11-year-old son, told IPS that he spent 15 “endless” days sleeping rough, and that two bags holding his clothes and cell phone were stolen. For the past few weeks, he has been living in a shelter, where he is overcoming his addiction to drugs.

Cerrezo and Arregui are two of the thousands of homeless people in Spain – who total 23,000 according to the last INE census, from 2012, although the social organisations that help them put the number at 40,000.

But the 2014 study on exclusion and social development in Spain by the Foessa Foundation reports that there are five million people in this country affected by “severe exclusion” – 82.6 percent more than in 2007, the year before the lingering economic crisis broke out.

The report states that although homeless people are part of the landscape, most people have no idea what their lives are like. They sleep rough or in shelters, after ending up on the street as a result of numerous social, structural and personal factors.

In Málaga dozens of poor families, many of whom were evicted for failing to pay the rent or mortgage, are living together in squats known as “corralas”, in empty buildings owned by banks or construction companies that went bankrupt.

In the first half of 2014 there were 37,241 evictions in Spain, according to judicial sector statistics.

Since 2007 there have been 569,144 foreclosures, the Platform for Mortgage Victims (PAH) reports. At the same time, there are 3.5 million empty dwellings – 14 percent of the total, according to the INE.

A number of people wake up on the stone benches near the stand where breakfast is served at 9:00 AM. “The day I went to the shelter, they told me it was full and they gave me a blanket,” says José, 47, who spent 15 years in prison and admits that he has to steal to pay for a night in a pension.

“The system could use a turn of the screw, to provide permanent and unconditional housing, in first place,” the director of the RAIS Foundation, José Manuel Caballol, told IPS.

His organisation is promoting the Housing First model in Spain. This approach focuses on moving homeless people immediately from the streets or shelters into their own apartments, based on the concept that their first and primary need is stable housing.

The approach targets people who have spent at least three years living on the streets, or those suffering from mental illness, drug use, alcoholism or disabilities.

Caballol said people with severe problems have a hard time gaining access to homeless shelters, supportive housing or pensions, and that even if they do they fail to move forward with their rehabilitation or end up being expelled from the system once again.

“The results are spectacular,” he said. “The people are so happy, they take care of their house and of themselves because they don’t want to lose what they have.”

The activist is convinced that this approach, which emerged in the United States in the 1990s, “offers a definitive solution to the problem of homelessness and spells out significant savings in costs for the state, in hospital care for example.”

Since July, a total of 28 homeless people have been living in eight housing units in Málaga, 10 in Barcelona and 10 in Madrid, some given to RAIS and others rented by the NGO by means of agreements with city governments and foundations, and with economic support from the government.

“Changes are seen very quickly in the people involved,” said Caballol, who stressed the role played by social workers, psychologists and experts in social integration, who listen, support and assist the beneficiaries, depending on what they themselves decide, rather than the other way around.

“On the street I feel vulnerable, so inferior. You lose your dignity and it’s hard to get it back. I want out of this,” says Miguel Arregui just before going into a shelter in downtown Málaga for the night.

Another local NGO, Ayuda en Acción (Help in Action), warns that one out of every five people are at risk of social exclusion in Spain.

Cerezo says the social network for the homeless falls short of meeting the current needs, and calls for other models like “casas de acogida” – halfway homes or residential-based homes for the most vulnerable, “with orientation by professionals.”

The number of people assisted in Spain by the Catholic charity Caritas rose 30 percent from 2012 to 2013, according to a report it released Sept. 29.