GUNTHORPES, Antigua, Nov 7 2014 (IPS) - As concern mounts over food security, two community groups are on a drive to mobilise average people across Antigua and Barbuda to mitigate and adapt in the wake of global climate change, which is affecting local weather patterns and by extension, agricultural production.

“I want at least 10,000 people in Antigua and Barbuda to join with me in this process of trying to mitigate against the effects of climate change,” Dr. Evelyn Weekes told IPS. 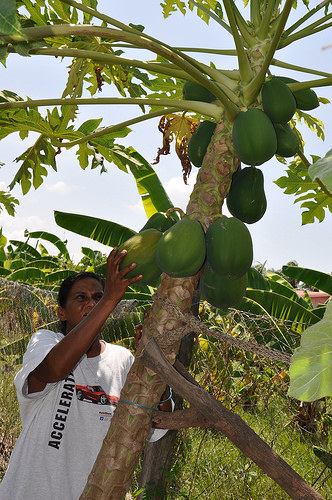 Bhimwattie Sahid picks a papaya in her backyard garden in Guyana. Food security is a growing concern for the Caribbean as changing weather patterns affect agriculture. Credit: Desmond Brown/IPS

“I plan to mobilise at least 10,000 households in climate action that involves waste diversion, composting and diversified ecological farming,” said Weekes, who heads the Aquaponics, Aquaculture and Agro-Ecology Society of Antigua and Barbuda.

She said another goal of the project is “to help protect our biodiversity, our ecosystems and our food security” by using the ecosystem functions in gardening as this would prevent farmers from having to revert to monocrops, chemical fertilisers and pesticide use.

Food security is a growing concern, not just for Antigua and Barbuda but all Small Island Developing States (SIDS), as changing weather patterns affect agriculture.

Scientists are predicting more extreme rain events, including flooding and droughts, and more intense storms in the Atlantic in the long term.

Weekes said the projects being proposed for smallholder farmers in vulnerable areas would be co-funded by the Global Environment Facility Small Grants Programme (GEF SGP).

“Our food security is one of the most precious things that we have to look at now and ecologically sound agriculture is what is going to help us protect that,” Weekes said.

“I am appealing to churches, community groups, farmers’ groups, NGOs, friendly societies, schools, etc., to mobilise their members so that we can get 10,000 or more people strong trying to help in mitigating and adapting to climate change.”

“Don’t throw kitchen scraps in your garbage because where are they going to end up? They are going to end up in the landfill and will cause more methane to be released into the atmosphere,” she said.

Methane and carbon dioxide are produced as organic matter decomposes under anaerobic conditions (without oxygen), and higher amounts of organic matter, such as food scraps, and humid tropical conditions lead to greater gas production, particularly methane, at landfills.

“So we intend to do agriculture in a smart way. By that I mean protected agriculture where we are going to protect the plants from the direct rays of the sun,” Thomas, who also serves as Caribbean civil society ambassador on agriculture for the United Nations, told IPS.

CaFAN represents farmers in all 15 Caribbean Community (CARICOM) countries. Initiated by farmer organisations across the Caribbean in 2002, it is mandated to speak on behalf of its membership and to develop programmes and projects aimed at improving livelihoods; and to collaborate with all stakeholders in the agriculture sector to the strategic advantage of its farmers.

“If a nation cannot feed itself, what will become of us?” argued Thomas, who said she wants to see more farmers moving away from the use of synthetic fertilisers and pesticides and begin to look towards organic agriculture.

Antigua and Barbuda led the Caribbean in 2013 as the biggest per capita food importer at 1,170 dollars, followed by Barbados at 1,126 dollars, the Bahamas at 1,106 dollars and St. Lucia at 969 dollars.

Besides the budget expense, import dependency is a source of vulnerability because severe hurricanes can interrupt shipments. As such, agriculture is an important area of funding for the GEF SGP.

GEF Chief Executive Officer Dr. Naoko Ishii, who met with the Caribbean delegation during the United Nations Conference on Small Islands Developing States held in Apia, Samoa from Sep. 1-4, had high praise for the community groups in the region.

“I was quite impressed by their determination to fight against climate change and other challenges,” Ishii told IPS. “I was also very much excited and impressed by them taking a more integrated approach than any other part of the world.”

Ishii was also “quite excited” about the participation of eight countries in the Caribbean Challenge Initiative, a large-scale project spurred on by the Nature Conservancy, which has invested 20 million dollars in return for a commitment from Caribbean countries to support and manage new and existing protected areas.

Member countries must protect 20 percent of their marine and coastal habitats by 2020. The Bahamas, the Dominican Republic, Jamaica, Saint-Vincent and the Grenadines, Saint-Lucia, Grenada, Antigua and Barbuda as well as Saint-Kitts and Nevis are already involved in the project.