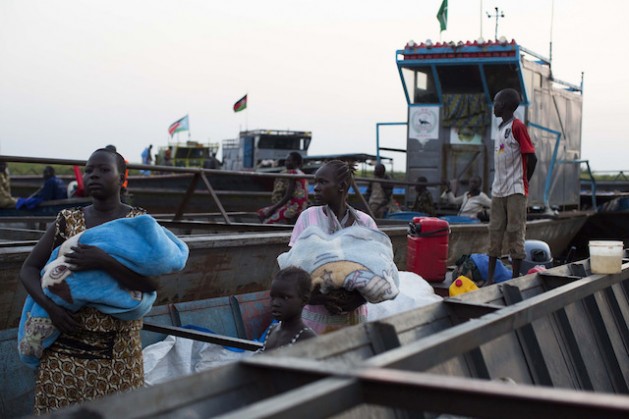 Displaced women flee fighting by boat to Mingkaman, Awerial County, Lakes State, South Sudan.. Only one out of 10 HIV positive mothers can get the drugs needed to avoid infecting her baby. Credit: Mackenzie Knowles-Coursin/IPS

Today she paid 20 South Sudanese pounds (about six dollars) for a bodaboda (motorbike taxi) ride to the centre and will have to skimp on food in the next days.

South Sudan at a quick glance

After four decades of on-off war, South Sudan gained independence from north Sudan in July 2011. But stability did not last long.

Violence rooted in political and ethnical power struggles erupted in December 2013, shattering the dreams of peace for the world’s newest country (pop 11.3m).

After independence, South Sudan improved services for its estimated 150,000 people living with HIV. The new conflict reversed these gains, disrupting not only health services but water and sanitation, roads and bridges, food security and community networks.

The United Nations estimates that 1.9 million people are newly displaced. Some fled to neighbouring countries, while 1.4 million huddle in 130 camps in South Sudan. Of these, 70 are so remote they are inaccessible to relief agencies, says a study by the HIV/AIDS Alliance.

Key drivers of the HIV epidemic in South Sudan include early age at first sex, low level of knowledge about HIV and of condom use, rape and gender-based sexual violence, high rate of sexually transmitted diseases and stigma.

The highest HIV prevalence is found in the three southern Greater Equatoria states bordering Uganda and the Democratic Republic of Congo. In Western Equatoria, where Samson and Mongo live, HIV prevalence is seven percent, more than double the national rate.

She will be hungry and few will help her in the village, although she is blind and a single mother of two children.

“Many people fear to come close because they fear they will contract HIV,” she told IPS.

Seated next to her, Khamis Mongo, 32, has lived with HIV for five years now and has suffered similar rejection. “Some people don’t want to eat from the same plate with me,” he says.

Mongo and Samson are among nearly 1,000 HIV positive people receiving care at the centre, of whom 250 are in antiretroviral therapy (ART). They are lucky: in South Sudan, just one out of 10 people needing ART gets it.

The clinic sees patients coming from as far as 100 kilometres.

“So many patients are dying because they can’t afford transport to collect their medicine here,” clinical officer Suzie Luka told IPS.

The challenges in Maridi are a microcosm of those that the world’s newest country, South Sudan, faces in containing the HIV epidemic.

Newly independent from north Sudan in 2011, and emerging from Africa’s longest civil war over 21 years with one of the world’s lowest human development statistics, South Sudan plunged again into fighting in December 2013.

The national HIV prevalence rate is under three percent and rising steadily, according to the Joint United Nations Programme for HIV/AIDS (UNAIDS).

This translates into 150,000 people living with HIV in a country whose social fabric and physical infrastructure was destroyed by successive wars.

Evelyn Letio, from the South Sudan Network of People Living with HIV, describes poor access, quality and continuity of health services, underpinned by denial of the disease and high stigma and discrimination, especially against women.

Despite denial by government officials, discrimination is rampant within the civil service, she adds:  “People who have disclosed to be HIV positive are laid off and called ’moving corpses’.”

Mongo and Sanson told IPS that the Maridi clinic often runs out of drugs and they have to return days later. Other times, staff has not been paid for months and stays away.

According to UNAIDS, just 22 centres provided ART before the new outbreak of violence.

Last December, the ART centres in Bor, Malakal and Bentiu, capitals of the states worst hit by fighting, had to close. The whereabouts of 1,140 patients are unknown. Most likely they have interrupted ART, endangering their lives.

Forty thousand people living with HIV have been directly affected by the recent violence, according to the United Nations. The new fighting reversed the gains made in HIV services since independence.

“We have lost many HIV positive people during the conflict, some died in the fighting and others migrated to peaceful areas,” said Awongo.

By U.N. counts,  the new conflict has displaced 1.9 million people.

In Juba, the capital, camps with long rows of white tents have sprung up to shelter some 31,000 displaced people.

Among them is Taban Khamis*, who escaped fighting in the key oil city of Bentiu, 1,000 kms north of Juba. He has interrupted ART and fears his health will soon worsen but he will not go to the camp’s HV clinic for fear of stigma.

“The camp is crowded and there is no privacy,” he told IPS. “Everyone will know that I have HIV.”

Prevalence of HIV and sexually transmitted infections “dramatically increases in camps”, says a study by the HIV/AIDS Alliance.

Awongo is aware of this problem. “We encourage people to come out of the camps to facility points where they can access services but this is not making a difference,” he says.