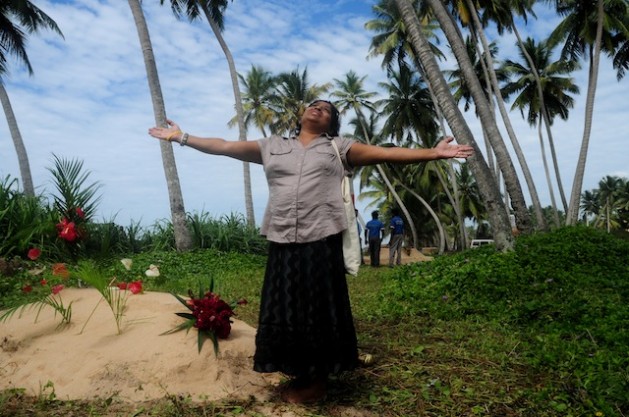 For many thousands of people in South Asia, the Christmas holidays will always double as a memorial for those who suffered tragic losses during the 2004 tsunami, which rushed ashore on Dec. 26 leaving a trail of tears in its wake.

The island nation of Sri Lanka was one of the worst hit, with three percent of its population affected and five percent of its gross domestic product (GDP) lost in damages. 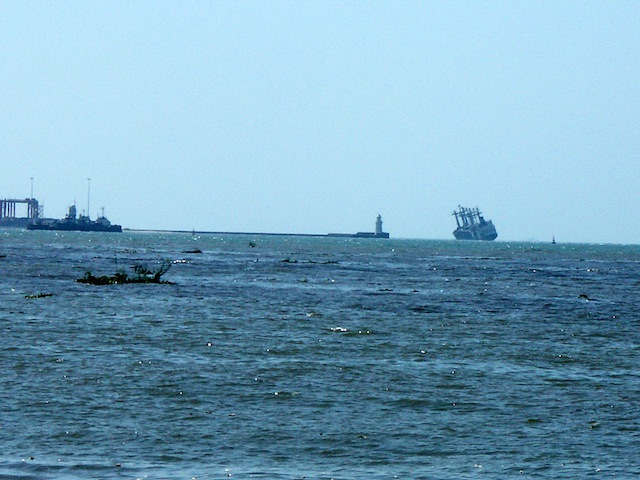 A ship tilts precariously at the mouth of the Colombo harbour as tsunami waves hit the southwestern coast of Sri Lanka on Dec. 26, 2004. Credit: Amantha Perera/IPS 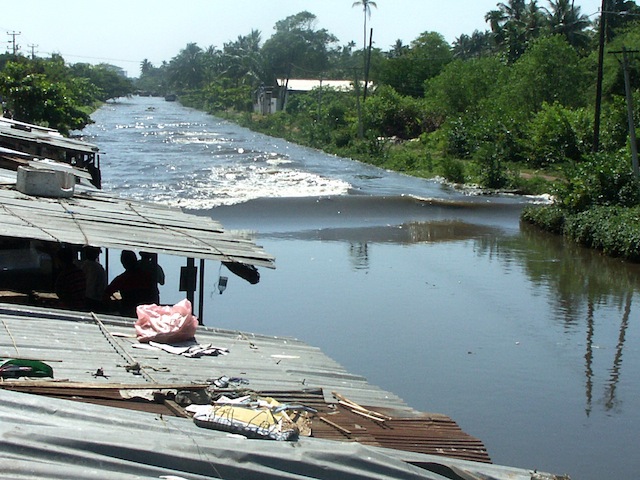 The first waves reached the interior of Sri Lanka along the Hamilton Canal located just south of the capital, Colombo, in the early hours of the morning. Credit: Amantha Perera/IPS 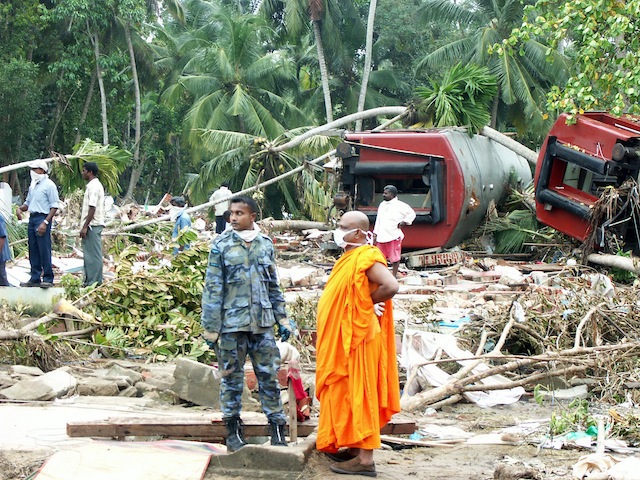 A Buddhist monk stands with a military officer in front of a train that was washed away by the waves in the southern village of Peraliya, killing over 1,000 people. Credit: Amantha Perera/IPS 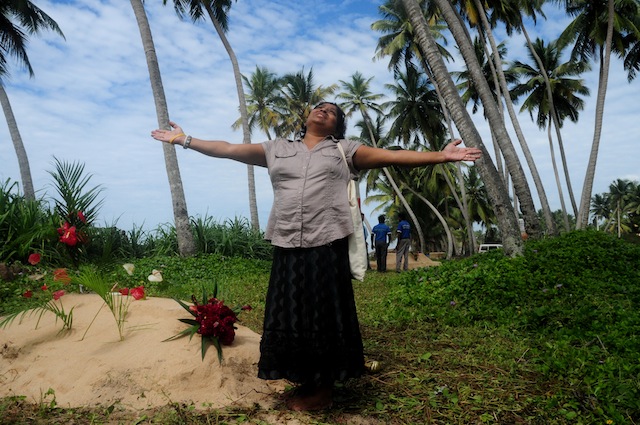 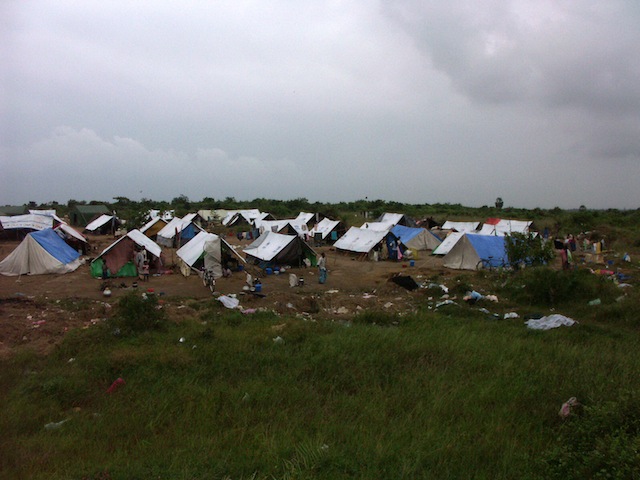 Residents of this emergency relocation centre in the Panichchankerni village of the eastern Batticaloa District also bore the brunt of Sri Lanka’s civil war, which finally ended in May 2009. Credit: Amantha Perera/IPS

According to the Disaster Management Centre (DMC), over a million people, mainly poor families from the coastal areas, had to be evacuated.

The Northern and Eastern provinces – already struggling in the grip of the protracted civil conflict that at the time was showing no signs of abating – bore the lion’s share of the destruction.

Weary from years of war, the population caught up in the fighting between government forces and the Liberation Tigers of Tamil Eelam (LTTE) were battered further by the waves: according to government data, 60 percent of the tsunami’s impact was concentrated on the northern and eastern coasts. 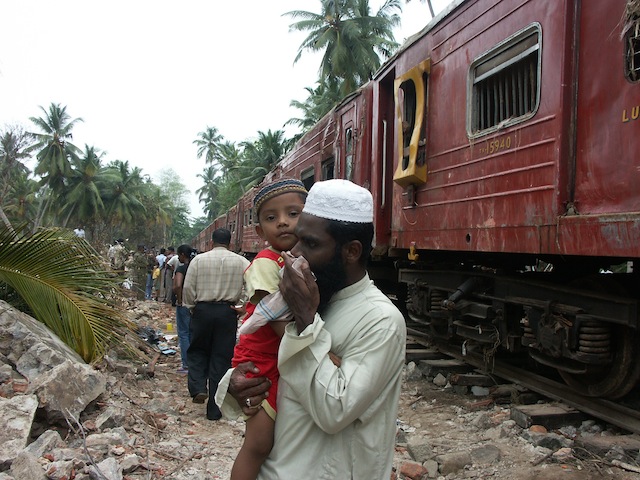 A man covers his nose and mouth with a handkerchief to shield himself from the smell emanating from the train, as dead bodies decompose in the sun. Credit: Amantha Perera/IPS 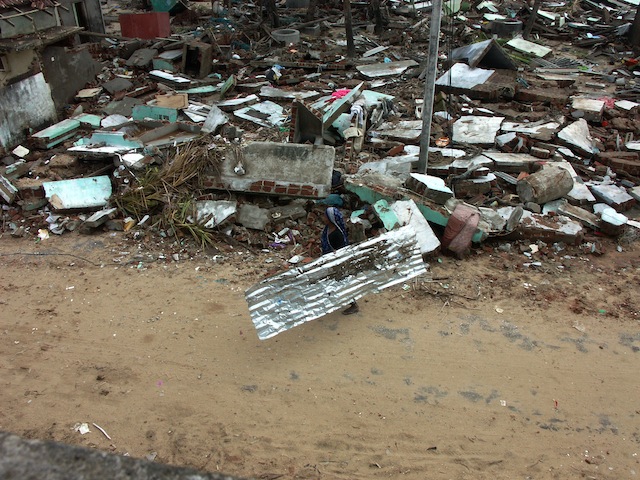 A woman carries a tin sheet in Kalmunai, a city in the Ampara District in Sri Lanka’s Eastern Province. Some 3,500 people living in three villagers on the eastern coast lost their lives – comprising a tenth of the national death toll. They were mostly poor fishermen living in humble homes next to the sea. Credit: Amantha Perera/IPS 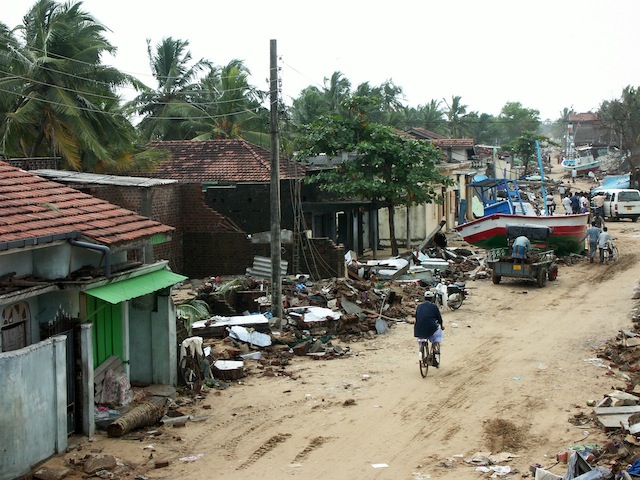 The village of Sainathimaruthu in eastern Sri Lanka was completely destroyed by the tsunami. Fisher families living along the coast faced another hurdle when the then Sri Lankan government initiated an ill-advised move to erect a 100-metre no-build buffer zone along the coast. The plan was later scrapped. Credit: Amantha Perera/IPS 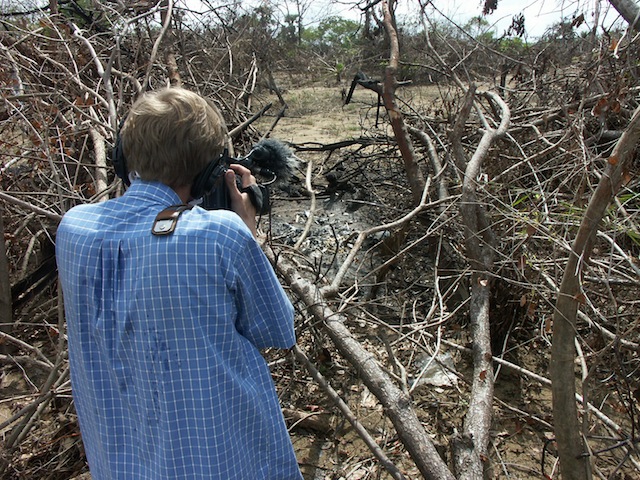 A photographer captures the burnt remains of a tsunami victim on the beach in the village of Pannichhankerni in the eastern Batticaloa District. Located within areas that were then controlled by the separatist Tamil Tigers, victims here found relief supplies slow to arrive, and then fell prey to squabbling between the Tigers and the government over aid distribution. Credit: Amantha Perera/IPS 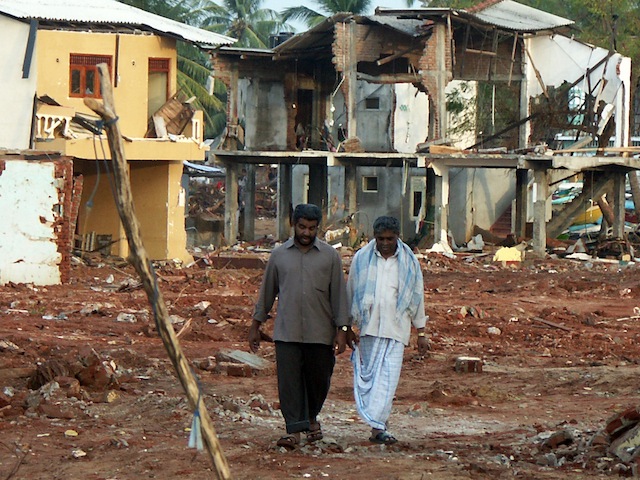 Men walk past destroyed buildings in the Hambantota town in southern Sri Lanka. Reconstruction in this town subsequently moved at a rapid pace. Credit: Amantha Perera/IPS

Ten years later, there are no large national monuments erected in memory of those who suffered in the aftermath of the disaster. There is not even a national archive of those who lost their lives. Small memorials dot the coast, but most are in serious need of a good paint job.

In the decade since the tsunami, Sri Lanka has undergone massive change. The nearly 30-year-old war is over; the displaced have returned to new or repaired homes; and for the majority of the island, the crashing waves have been relegated to the realm of a bad, fading nightmare.

But for the tens of thousands who lived through the catastrophe in 2004, the terror of that day will never be forgotten. And while development picks up around the island, with shining new roads leading the way to luxury tourist destinations, many are yet to come to terms with the loss, trauma and poverty that the tsunami brought into their lives. 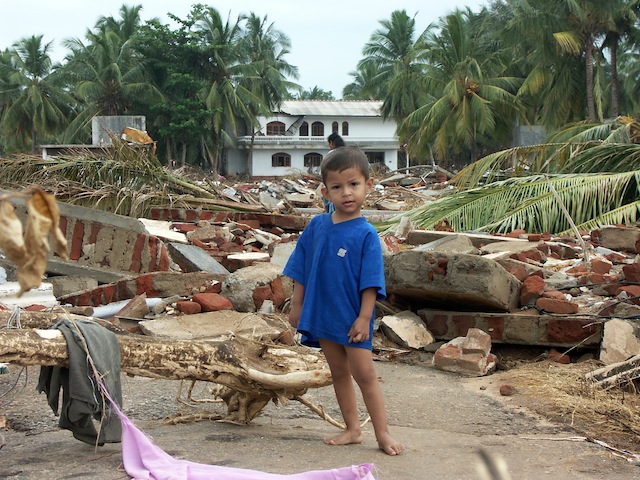 A small child stands amidst the destruction in the town of Hambantota, located in southern Sri Lanka. Credit: Amantha Perera/IPS 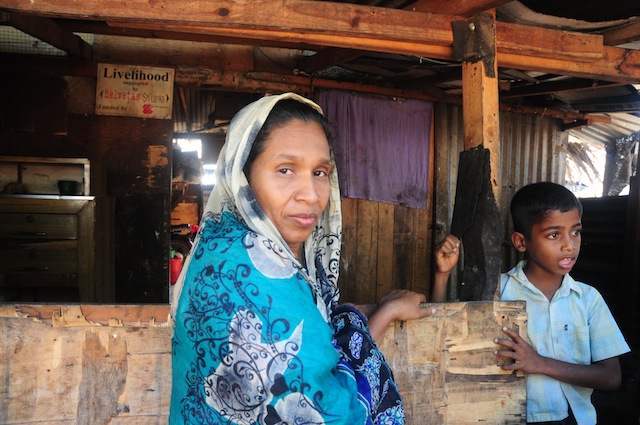 Five years after the tsunami, several hundred people were still living in temporary shelters meant to last for just one year in the eastern city of Kalmunai, where a lack of access to land proved a major hurdle to rehabilitation of victims. Credit: Amantha Perera/IPS 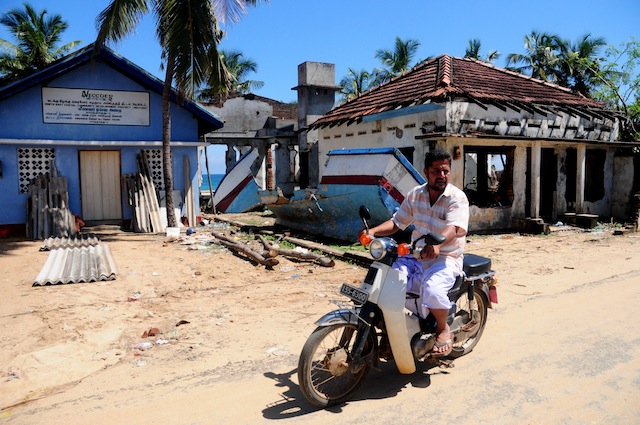 A man rides his bike by houses destroyed by the tsunami in the Karathivu area in Kalmunai. Credit: Amantha Perera/IPS 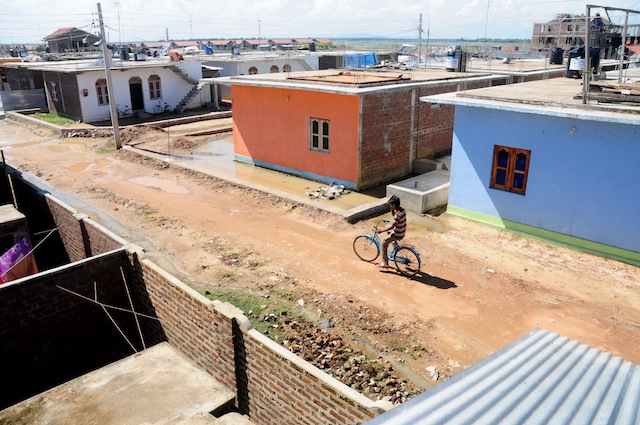 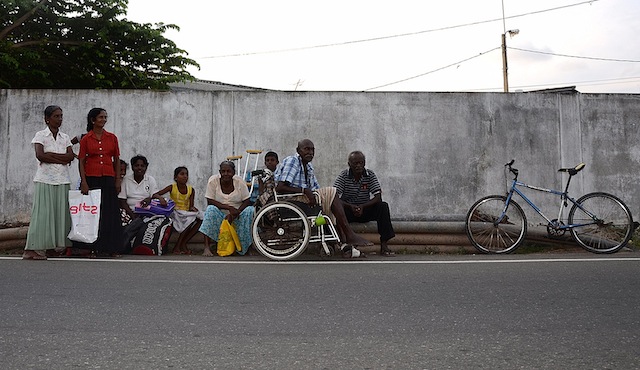 Residents from the coastal areas of Ratmalana, a Colombo suburb, wait by the roadside after being evacuated from their homes following a tsunami warning on April 11, 2012. Poor families, living in coastal areas, are most vulnerable to natural disasters. Credit: Indika Sriyan/IPS