The Soil, Silent Ally Against Hunger in Latin America 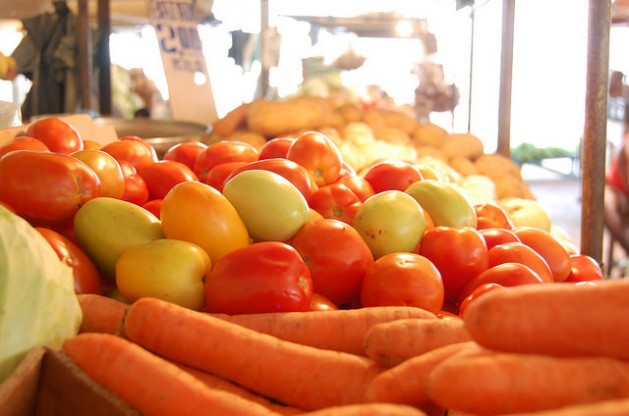 The fertility of tropical soil can be appreciated at this market stall in the Amazon city of Belem do Pará in northern Brazil. Credit: Marianela Jarroud/IPS

SANTIAGO , Dec 19 2014 (IPS) - Latin America and the Caribbean should use sustainable production techniques to ensure healthy soil, the basic element in agriculture, food production and the fight against hunger.

“We are often not aware that it can take 1,000 years to generate one centimetre of healthy soil, but we can lose that centimetre in a few seconds as a result of pollution, toxic waste, or misuse of the soil,” he said in an interview with Tierramérica.

Despite its importance, 33 percent of the planet’s soil is degraded by physical, chemical or biological causes, which is reflected in a reduction in plant cover, soil fertility, and pollution of the soil and water, and which leads to impoverished harvests, FAO warns.

Latin America and the Caribbean have the largest amount of potential arable land in the world.

“We are often not aware that it can take 1,000 years to generate one centimetre of healthy soil, but we can lose that centimetre in a few seconds as a result of pollution, toxic waste, or misuse of the soil.” -- Raúl Benítez

The worst degradation of soil is in Central America and southern Mexico, where it affects 26 percent of the land. In South America that proportion is 14 percent.

Forty percent of the most degraded land is in parts of the world with high poverty rates.

On Dec. 5, FAO launched the International Year of Soils 2015 as part of the Global Soil Partnership and in collaboration with the world’s governments and the Secretariat of the U.N. Convention to Combat Desertification.

Latin America “is highly aware of the fundamental role played by the soil in the fight against hunger, which means it takes this issue extremely seriously,” Benítez said in the central FAO offices in Santiago. He pointed out that Latin America has made the most progress in achieving food security, as the region in the world with the greatest number of countries that have met the hunger target of the first of the eight Millennium Development Goals (MDG) – a series of anti-poverty targets agreed by governments in 2000.

“For that reason, I don’t have the slightest doubt that this International Year of Soils will help draw the attention of governments, organisations and the population, and Latin America is sure to assume a commitment and act in accordance with the region’s needs,” he said.

The regional FAO office has forged alliances with a variety of social organisations working to restore the soil.

In Chile, one of them is the Centro Comunal de Medio Ambiente Naturaleza Viva, an environmental organisation of the municipality of Estación Central, on the west side of Santiago.

Community organiser María Contreras, the president of the centre, led the struggle to recover 40 hectares from the old garbage dump of Lo Errázuriz, in the municipality of Maipú, also to the west of Santiago, where all of the municipalities of the Chilean capital dumped their trash in the 1970s and 1980s.

“That’s where the dump was, it was the Fundo San José de Chuchunco dump, and in some parts they would extract materials [rocks, gravel, sand, etc],” Contreras told Tierramérica.

The government of the Metropolitan Region of Santiago owns 30 hectares of the land, and the rest belongs to the municipality of Estación Central.

“We now have 10 hectares that have been restored, with trees planted, and the regional government has hired security and irrigation services,” said the community leader, who explained that the plan is to extend the green forested area to another 20 hectares, with walking and bike paths.

The area is now called the Forests of Chuchunco, a word that means “between the waters” in the Mapuche indigenous language.

“This experience arose out of a need for survival,” said Contreras, who pointed out that 30 years ago, “Maipú supplied Santiago with fresh vegetables.”

Two years ago, FAO financed the construction of a small greenhouse there, “and today we produce seeds,” she said.

The project got underway in 2010. But to extend the reforestation effort, studies are needed to investigate what lies under the surface – presumably biogas or leachate.

“Without soil we would all die,” the activist said. “The life we don’t see is below ground.”

Contreras called for strengthening social networks and citizen participation to protect the soil, and stressed the need for environmental education in schools to make projects like the Forests of Chuchunco sustainable.

“We want children to have basic education on the environment so they will be responsible citizens tomorrow,” she said.

Another example is the Vermiculture Research and Development Centre (Ceilom), which seeks to promote and expand worm farming by creating a culture of household recycling of organic material.

The centre was founded in 1980 when the first red Californian earth worms (Eisenia foetida) were brought to Chile. The centre offers vermiculture courses with the aim of reducing the amount of garbage and recycling 100 percent of organic material produced in a household, which averages 700 kg a year for a family of four.

“We currently have an agreement with a vegetable market in Recoleta [north of Santiago] to recover and treat their waste. And this kind of arrangement could be made with many street markets,” the head of Ceilom, Marcela Campos, told Tierramérica.

She also cited the Santiago Metropolitan Park, a “green lung” in the middle of the city, which houses the zoo and “produces so much waste that could be treated.”

“That way it would not need to use chemical fertilisers to restore its green areas, for example,” she said.

Today, at a global level, 12 percent of land is used for crops, a total of 1.6 trillion hectares, which means “we have to redouble efforts and preserve our soil using production techniques that make it possible to conserve our natural resources,” Benítez said.

Sustainable soil is “a silent ally” in the erradication of hunger, he concluded.
This story was originally published by Latin American newspapers that are part of the Tierramérica network.