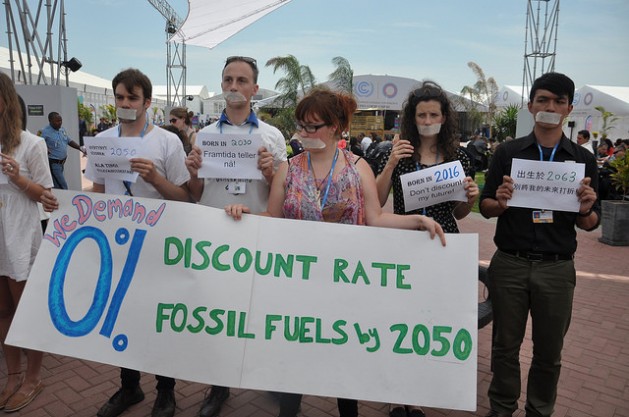 A group of activists at the COP20 climate change meeting in Lima. Credit: Desmond Brown/IPS

LIMA, Dec 5 2014 (IPS) - The lead negotiator for an inter-governmental organisation of low-lying coastal and small island countries doesn’t mince words. She says the new international climate change treaty being drafted here at the ongoing U.N. Climate Change Conference “is to ensure our survival”.

Ngedikes “Olai” Uludong of the Alliance of Small Island States (AOSIS) told IPS she is hoping for “an agreement that takes into account all the actions we put in, ensures that the impacts that we feel we can adapt [to], we can have access to finance to better prepare ourselves for the projected impacts that us small islands are going to be suffering.”

“We already know the CO2 emission levels are a train wreck right now, you are going over 450 parts per million. How do you reduce that? By ensuring that you build on the existing technologies that can between now and 2020 help reduce the emissions and stabilise the atmosphere.” -- Ngedikes “Olai” Uludong

The agreement is likely to be adopted next year at the Paris climate conference and implemented from 2020. It is expected to take the form of a protocol, a legal instrument, or “an agreed outcome with legal force”, and will be applicable to all parties.

Uludong said an ideal 2015 agreement for AOSIS would use the Small Island Developing States (SIDS) as the benchmark.

“If you create an agreement that takes into account the needs of the SIDS then it would be good for the entire planet. We are fighting for 44 members but if we fight for the islands, a successful agreement will also save islands from the bigger developed countries – for example, the United States has the islands of Hawaii,” she said.

“So an agreement that takes into account the 44 members can actually save not just us but also the other islands in the bigger countries.”

Established in 1990, AOSIS’ main purpose is to consolidate the voices of Small Island Developing States to address global warming.

Uludong said their first priority on the road to Paris is progress on workstream one:  the 2015 agreement. This is followed by workstream two which is the second part of the ADP (the Ad hoc Working Group on the Durban Platform for Enhanced Action), while the third is the review looking at the implications of a world that is 1.5 to 2.0 degrees C. hotter.

“Ambition should be in line with delivering a long-term global goal of limiting temperature increases to below 1.5 degrees and we need to consider at this session ways to ensure this,” said the AOSIS lead negotiator, who noted that finance is another priority.

“How do you encourage donor countries to revive the Adaptation Fund? How do you access funding for the new finance mechanism, the Green Climate Fund (GCF), especially with the pledges from the bigger countries that we’ve seen recently?” 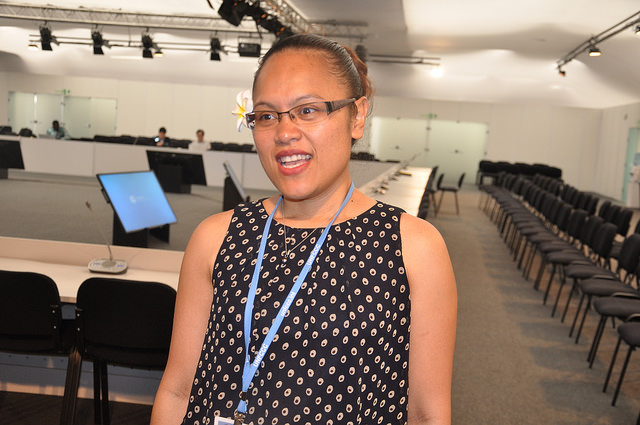 With finance being a central pillar of the 2015 climate change agreement, the current state of the Clean Development Mechanism (CDM) is another troubling issue for AOSIS. It was designed to encourage wealthy countries to offset their emissions by funding low-carbon projects in developing countries that generate permits for each tonne of CO2 avoided.

“The big picture is that the CDM is at a crossroads,” Hugh Sealy, a Barbadian who heads the U.N.-backed global carbon market, told IPS.

“The market has collapsed. The price of CERs has plummeted from a high of between 10 and 15 dollars per CER to less than 30 cents.

CERs (Certified Emission Reductions) are a type of emissions unit (or carbon credits) issued by the CDM Executive Board for emission reductions achieved by CDM projects and verified by an accredited Designated Operational Entity (DOE) under the rules of the Kyoto Protocol.

“We need a clear decision here in Lima in general, and Paris in particular, as to what the role of international offset mechanism will be in the new climate regime,” Sealy said.

“We need parties, particularly the developed country parties, to raise the level of ambition and to create more demand for CERs. Outside of that, we are searching for non-traditional markets and we are also looking to see what services we could provide to financial institutions that wish to have their results-based finance verified,” he added.

Sealy also said he wants “to go face to face with those technocrats in Brussels,” where he said “someone has made a dumb decision.”

The CDM, he explained, was being undermined by a Brussels decision to restrict the use of its permits in the EU emissions trading system.

He said personal attempts made to raise the problem with the European Commission have so far proved futile.

Uludong said that from the perspective of AOSIS, building up the price of CERs can be done “through green technologies and having incentives for countries to have greener projects” into the CDM.

Outlining medium and long term expectations for AOSIS, Uludong said these include work on improving the right technologies that would reduce emissions and have countries move away from fossil fuel technologies and go into alternative and renewables

“If we can do that between now and 2020 then we can drastically reduce the impacts by ensuring that these technologies meet the goal of reducing greenhouse gasses through mitigation,” she told IPS. “If we do that now, it will build beyond 2020. We have to have a foundation to build on post-2020 so you start by mobilising actions rapidly now.

“We already know the CO2 emission levels are a train wreck right now, you are going over 450 parts per million. How do you reduce that? By ensuring that you build on the existing technologies now that can between now and 2020 help reduce the emissions and stabilise the atmosphere,” Uludong added.