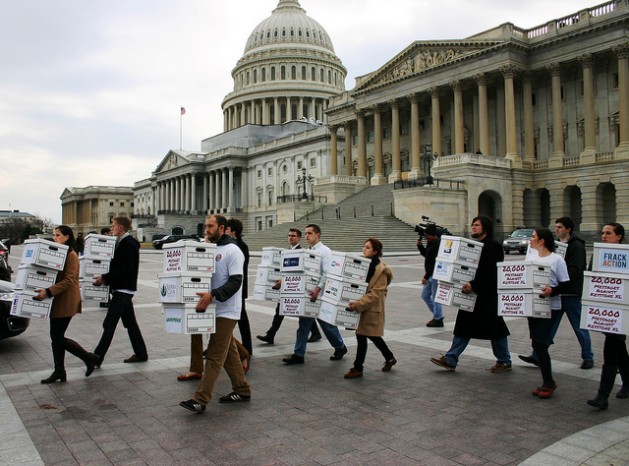 Representatives from a coalition of over 30 environmental and progressive groups delivered more than 800,000 messages to Democratic Senator Harry Reid and Republican Senator Mitch McConnell in 2012 urging them to block attempts to resurrect the Keystone XL tar sands pipeline. Credit: 350.org/cc by 2.0

NEW YORK, Feb 12 2015 (IPS) - With battle lines sharpening over the stalled Keystone XL pipeline, a new analysis details the intense industry lobbying of both houses of the U.S. Congress since 2013 – to the tune of 58.8 million dollars by five refinery companies alone.

According to MapLight, a nonprofit, nonpartisan research organisation that reveals money’s influence on politics, the oil and gas industry gave, on average, 13 times more money to members of the House of Representatives who voted “yes” (43,375 dollars) on the bill called H.R. 3 than those who voted against it (3,610 dollars).

"Another climate denier-controlled House vote in favour of oil isn't a surprise, and the Democrats who voted with them of course are oil-funded politicians too." -- Kyle Ash of Greenpeace

The bill would allow TransCanada to build the highly controversial Keystone XL pipeline without a presidential permit or additional environmental review. It passed the House on Wednesday with a vote of 270-152.

“How can we truly trust legislators to vote in the public interest when they are dependent on industry campaign funding to get elected?” Pamela Behrsin of MapLight told IPS. “Our broken money and politics system forces lawmakers into a conflict of interest between lawmakers’ voters and their donors.”

She noted that Rep. Kevin Cramer, a Republican from North Dakota and the sponsor of the legislation, received 222,400 dollars from the oil and gas industry, the ninth most among members of the House voting on H.R. 3.

Figures for the Senate were comparable, with the oil and gas industry giving, on average, 10 times more money to senators who supported the measure (236,544 dollars). The Senate sponsor, John Hoeven – also a Republican from North Dakota – received 275,998 dollars.

“Big Oil thinks it can buy votes in DC, and unfortunately the Keystone vote shows that is still possible in the halls of Congress,” David Turnbull of Oil Change International, a nonprofit working to promote a shift away from fossil fuels, told IPS.

“But what’s more important is that Big Oil can’t buy the American people, who are standing up to the industry’s bullying in Washington and demanding the president reject the pipeline and take bold action to move us off fossil fuels and towards a safer climate future.”

President Barack Obama has 10 days to decide on a veto. Since the 1,179-mile pipeline crosses national borders, Obama needs to issue a permit declaring the pipeline serves the “national interest” in order for it to be approved. The new legislation would circumvent such approval.

The pipeline has united every prominent U.S. environmental group in opposition, and even prompted the venerable Sierra Club to suspend its 120-year ban on civil disobedience. The group’s executive director, Michael Brune, was arrested in front of the White House during a protest against Keystone in February 2013, and there have been massive rallies against it since then.

Studies have shown that burning the heavy oil the pipeline would carry would emit more than 181 million metric tonnes of carbon dioxide each year – equal to the emissions of nearly 38 million cars or 51 coal-fired power plants.

The International Energy Agency (IEA) has warned that two-thirds of proven fossil fuel reserves need to be kept in the ground in order to have a 50 percent chance of staying below the two-degree threshold of warming that could avoid the worst consequences of climate change.

Kyle Ash of Greenpeace told IPS that since the House had already passed the companion of the Senate bill, normally each chamber would reconcile their respective bills in conference, especially since both chambers are now controlled by the Republicans.

Instead, the full House went ahead and voted on the Senate version without making any changes, “apparently because GOP leaders fear that House Republican conferees will be too crazy”.

“As the Senate votes on climate amendments like Hoeven and Schatz also demonstrated, that the House voted on S.1 (the Senate version of the bill) ironically may be a sign that at least the crassest of congressional fossil fuel love is no longer in vogue,” he said.

“Another climate denier-controlled House vote in favour of oil isn’t a surprise, and the Democrats who voted with them of course are oil-funded politicians too.”

“We’ve done quite a bit of work on the massive amount of money members of Congress receive from the industry,” Turnbull said. “Indeed, it’s unfortunately not a surprise.”

The pipeline would carry petroleum from Canada’s oil sands to the U.S. Gulf Coast, and MapLight notes that some of Keystone XL’s strongest supporters are the Gulf Coast refinery companies that have expanded their facilities and would benefit from Canadian oil that will flow through the pipeline.

Valero, ExxonMobil, Marathon Petroleum, Phillips 66, and Motiva Enterprises (a company owned by Shell and the Saudi Arabian state oil company Saudi Aramco) constitute the five companies with the most refinery capacity along the Gulf Coast, the group says.

Together, the five companies control 45 percent of the refining capacity in the U.S., and all have been reported as possible customers of the pipeline.

“The vote in Congress on Keystone XL is a desperate distraction by an oil-soaked Congress. The president has said numerous times that he will veto the bill, and he’s right to do so,” Turnbull said.

“As the EPA [Environmental Protection Agency] recently laid out, the Keystone XL tar sands pipeline clearly fails the president’s own climate test, and should be rejected. The president has all the information he needs to reject the pipeline and we hope he does so as soon as possible, so we can all move on to building the clean energy economy rather than catering to the whims of Big Oil.”

A Washington Post/ABC News poll last month found 34 percent of respondents wanted the pipeline built now, while 61 percent said the environmental impact reviews – including by the State Department and the heads of eight other government agencies – should continue.

“The House is expediting this bill getting to the president so they can gloat about how Congress loves oil and he doesn’t – despite the Obama administration going out of its way to expand oil drilling on public lands,” Ash said.

“However, the KXL pipeline may have died when the president agreed with New York Times reporter Tom Friedman last June that growing fossil fuel supply is bad for the climate (‘we can’t burn it all’). I believe he will do as he said and veto this bill.”