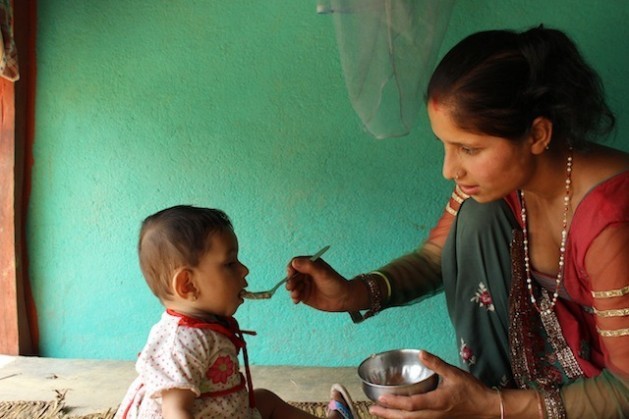 All across Asia, men face almost no consequences for domestic violence and women have few places to turn for help, allowing the abuse to continue in a vicious cycle. Credit: Mallika Aryal/IPS

UNITED NATIONS, Mar 3 2015 (IPS) - Nearly half of the four billion people who reside in the Asia-Pacific region are women. They comprise two-thirds of the region’s poor, with millions either confined to their homes or pushed into the informal labour market where they work without any safeguards for paltry daily wages. Millions more become victims of trafficking and are forced into prostitution or sexual slavery.

Others find themselves battling an enemy much closer to home; in fact, for many women the greatest threat is inside the home itself, where domestic abuse and intimate partner violence is a daily occurrence.

Half of all South Asian nations, and 60 percent of countries in the Pacific, have no laws against domestic violence. -- Asia Pacific Forum (APF)
UN Women says that women in Asia and the Pacific retain one of the world’s highest rates of gender-based violence, much of it concentrated within a single home or perpetrated by a spouse or intimate partner.

In the Pacific Island nation of Papua New Guinea, for instance, 58 percent of women claim to have experienced physical, sexual or emotional abuse in relationships, while 55 percent say they were forced into sexual encounters against their will.

In Fiji, an island nation in the South Pacific, 66 percent of women report the use of violence by intimate partners; 44 percent suffered the abuse while pregnant.

In East Timor, one in four women experience physical violence at the hands of a partner every year and 16 percent of married women report being coerced by their husbands into having sex.

Any number of reasons could explain this grim reality. According to the Asia Pacific Forum (APF), “Women in the region experience some of the lowest rates of political representation, employment and property ownership in the world.”

Even those who have jobs earn less than their male counterparts, with a pay gap for women in the region ranging from 54-90 percent, despite the existence of laws supposedly guaranteeing ‘equal pay for equal work’.

A complete absence of legal provisions against sexual harassment in the workplace means that between 30 and 40 percent of working women in Asia and the Pacific report experiencing verbal, physical or sexual abuse, APF says.

The organisation also found that half of all South Asian nations, and 60 percent of countries in the Pacific, have no laws against domestic violence.

In this legal vacuum, men face almost no consequences for their actions and women have few places to turn for help, allowing the abuse to continue in a vicious cycle.

It also means that government data on abuse are, at best, extremely conservative estimates, since most women do not report violent incidents – either from fear of reprisals or because of a lack of faith in the legal system to deliver any solutions.

In India, for example, the most recent government household survey found that 40 percent of women had been abused in their homes; but an independent survey backed by the Planning Commission of India puts the number closer to 84 percent.

In Indonesia, where the police recorded over 150,000 cases of violence against women in 2009 – 96 percent of which were incidents involving a husband and wife – activists estimate that just one out of 10 cases actually gets reported; meaning the real number of survivors of domestic violence is at least nine times higher than official figures indicate.

Last year the Philippine Commission on Women (PCW) reported that 2013 was one of the worst years for women, with the highest number of reported incidents of violence.

Citing statistics from the 2008 National Demographic and Health Survey (NDHS), the Commission stated that 14.4 percent of married women, and 37 percent of separated or widowed women, experienced spousal abuse.

Four percent of all women who have ever been pregnant have suffered violence at the hands of a partner, while three in five abused women report long-lasting physical and psychological impacts of the violence or battery.

Policy-makers say tougher implementation of laws partially accounts for the increased number of reported incidents, which saw a 49.5 percent rise from 2012.

The same could soon be true in China, where the recently released draft of the country’s first anti-domestic violence law was hailed by civil society as a step towards stemming rampant abuse – physical, sexual and psychological – in millions of households.

Data from the government-run All-China Women’s Federation show that some 40 percent of women have been subjected to physical or sexual violence in their relationships, while just seven percent of battered women report the violence to the authorities.

U.N. agencies say a dearth of laws against marital rape in the region has fostered a sense of impunity among husbands. In 2012, UN Women found that only eight countries across Asia and the Pacific had laws that specifically criminalised marital rape, leading millions – including women – to feel that men were justified in sexually or physically abusing their wives.

Too often, the legal system operates in ways that leaves women out in the cold and allows perpetrators of violence to walk free.

Courts are largely inaccessible to women in rural areas; legal fees and the price of forensic examinations are cost-prohibitive to women who are not in control of their own finances; and male biases within the police force means that law enforcement officials are largely unsympathetic to the few who dare come forward to report abuse.

These numbers are even more dismal in the police, with women in South Asia comprising a mere three percent of the police force, a figure that rises to just nine percent for East Asia and the Pacific.

Home to four of the five fastest-growing economies in the world, Asia’s shining visage is darkened by the shadow of misery its women face in their own homes.

Absent the implementation of robust laws, sustained efforts to improve women’s representation at all levels of government and genuine measures to ensure women gain a sturdy economic foothold in all countries in the region, experts say it is unlikely that domestic violence will decline.