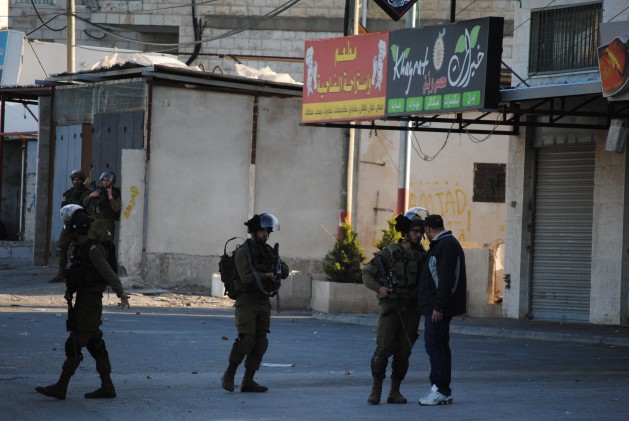 RAMALLAH, West Bank, Mar 17 2015 (IPS) - As soon as the truck carrying Israeli dairy products entered Ramallah’s city centre it was surrounded by Palestinian activists who proceeded to remove and trash almost 20,000 dollars’ worth of mainly milk and yoghurt.

The driver of the truck, a Palestinian from the nearby Qalandia refugee camp, and an Israeli employee fainted after watching helplessly.

The goods, already paid for by Palestinian shopkeepers, were smashed up and stomped on before they were spread all over the street in front of the Palestinian police stationed at the traffic circle.

Activists from the Palestinian Authority (PA)-affiliated Fatah movement are behind a boycott of Israeli goods throughout the West Bank.

The boycott follows the withholding by Israel of millions of Palestinian tax dollars in retaliation for the PA advancing plans to take Israel to the International Criminal Court (ICC) for alleged Gaza war crimes and abuses in the West Bank.

“We have entered the second phase of the campaign which is confiscating and damaging these goods,” said Abdullah Kamal, who is the leader of the campaign.

Several weeks earlier, the campaign had involved Kamal and his associates making the rounds of shops in Ramallah and ordering shopkeepers to rid their stores of Israeli produce and being warned not to purchase any more. Similar moves are under way in other cities of the occupied West Bank.

Although the Palestinian territories are not a huge part of Israel’s domestic market, the move is part of a number of grassroots campaigns of defiance by Palestinians against Israel’s occupation of the West Bank and its siege of Gaza.

“The local boycott by Palestinians is peaceful and a way of exerting some pressure on Israel even if it not very strong,” Professor Samir Awad, a political scientist from Birzeit University near Ramallah, told IPS

“The least Palestinians can do is not finance the occupation.”

A more serious development, from Israel’s point of view, was a recent vote by the Palestine Liberation Organisation’s (PLO) executive committee in favour of discontinuing security coordination with Israel’s intelligence and security services.

Palestinians have long accused the PA of being Israel’s sub-contractor to the occupation and the Israelis rely on this security coordination to prevent another Palestinian uprising and control armed resistance.

“The situation on the ground is getting serious and it is possible that Abbas could make this decision before the end of the month,” Fatah member Murad Shitawi told IPS.

“We will not accept the continuing occupation with its economic and security implications,” said Shitawi, who is the coordinator of protests in the northern West Bank village of Kafr Qaddoum, and who was recently released from an Israeli jail.

Every Friday, dozens of villages throughout the West Bank and Gaza take part in protests against Israel’s expropriation of Palestinian land and the occupation despite the huge toll this has taken on Palestinians in terms of the number wounded and killed.

Shitawi pointed out that four or five years ago there were only a few villages taking part in regular protests on a weekly basis.

“Now there are many and the protests are not limited to Friday.”

Another act of Palestinian defiance has been the repeated building of protest tents and villages in Area C of the West Bank, 60 percent of the territory, in protest against Israel’s forced removal of Bedouins and other Palestinians who have lived there for centuries.

Israel has designated Area C off limits to Palestinians and exclusively for Israeli settlers, which is illegal under international law.

One of these protest camps near the village of Abu Dis, just outside Jerusalem, has been rebuilt 10 times after Israeli security forces rased it, confiscated equipment and arrested and assaulted activists who had encamped there.

Furthermore, Palestinian grassroots activists are also working in conjunction with their international supporters, and with Israeli peace groups, to up the pressure on Israel as the international Boycott, Disinvestment and Sanctions (BDS) campaign continues to strengthen.

A growing number of global businesses, church and university groups and artists are either refusing to visit Israel, do business with Israeli companies involved in the West Bank, or are boycotting Israeli institutions operating abroad.

Israel Apartheid Week, “an international series of events that seeks to raise awareness about Israel’s apartheid policies towards the Palestinians and to build support for the growing BDS campaign” was held in a number of capitals across the globe during March.

Israeli peaceniks and grassroots activists have been among some of the most vocal critics of their government’s policies towards the Palestinians, spawning a number of organisations which take part in the weekly protests.

Groups such as Ta’ayush, Breaking the Silence, Ir Amim and Rabbis for Human Rights seek to educate people about the realities of life under occupation.

Some of them also accompany Palestinian farmers trying to cultivate their land under continued settler harassment.

“The strength of the grassroots organisations’ action against Israel is not going to go away anytime soon and will only continue to grow in strength internationally,” Awad told IPS.

“The PA will also continue with its plans to take Israel to the ICC and should Israel continue to withhold Palestinian tax money indefinitely, the PA could collapse and the result would be chaos.” (END/2015)