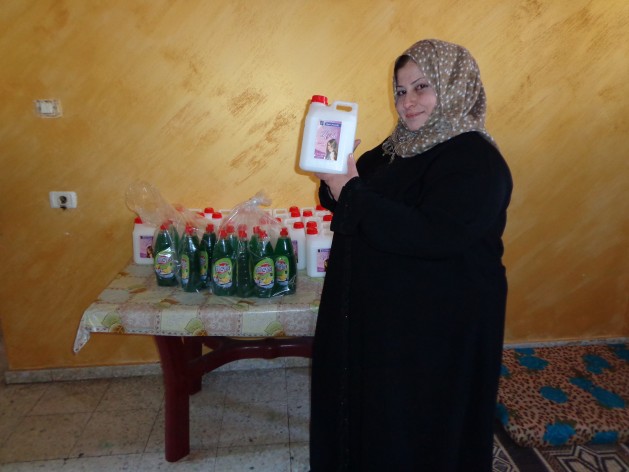 Islam Iliwa lost her home and cleaning products business in Gaza following an Israeli bombardment. She is one of many single, divorced mothers struggling to survive under the siege. Credit: Mel Frykberg/IPS

GAZA CITY, Mar 21 2015 (IPS) - Israel’s siege of Gaza, aided and abetted by the Egyptians in the south, has aggravated the plight of Gazan women, and the Jewish state’s devastating military assault on the coastal territory over July and August 2014 exacerbated the situation.

The 45-member commission adopted the resolution – which was sponsored by Palestine and South Africa – by a vote of 27-2 with 13 abstentions. The United States and Israel voted against, while European Union members abstained.

“Women’s suffering doubled in the Gaza Strip in particular due to the consequences of Israel’s latest offensive, as they have been enduring hard and complicated living conditions,” said Gaza’s Palestinian Centre for Human Rights (PCHR) in a statement released on Mar. 8 to mark International Women’s Day.

“During the 50-day Israeli offensive, women were exposed to the risks of death or injury because of Israel’s excessive use of lethal force as well as Israel’s blatant violations of the principles of distinction and proportionality under customary international humanitarian law,” said PCHR.

During the war, 293 women were killed (18 percent of the civilian victims) and 2,114 wounded, with many sustaining permanent disabilities.

However, inherent cultural, religious and legal implications have also played a part in making life untenable for Gaza’s female population.

The world of 40-year-old Islam Iliwa from Zeitoun in Gaza City was shattered during a night of heavy bombardment last year during the war.

The divorced mother of three children, aged 10 to 16, lost nearly everything when an Israeli air strike destroyed her home and with it the business that she had worked so hard for years to build up.

Iliwa had been living in Dubai when she and her husband divorced, a move that makes it particularly hard for women to reintegrate into conservative Arab society.

The divorce was traumatic but Iliwa was determined to make a go of her life and moved back to Gaza in 2011 with the money she had saved up while working in Dubai.

Under Islamic law, the father would have been given automatic custody of their three children at their respective ages.

However, Iliwa decided she would pay her husband to sign custody of the children over to her as well as forfeit her rights to child support.

“I told him I would survive without him and make a good life for myself and my children,” Iliwa told IPS.

“On arriving back in Gaza, I poured my life savings of 20,000 dollars into a small business which sold cleaning materials,” she said.

“In a good month before the war I was able to earn about 2,400 dollars and my business was growing. However, my home and the little factory I built were both destroyed during the Israeli bombing attack. My son Muhammad was also injured,” recalled Iliwa, as she broke down and wept at the bitter memory.

Iliwa and her three children were forced to flee to a U.N. shelter, along with hundreds of thousands of other desperate Gazans.

When it was safe to leave the shelter, after a ceasefire had been reached, Iliwa and her children were destitute and homeless.

However, the plucky mother of three has been able to rent a new home and slowly rebuild her business with the help of Oxfam, even though she is now making a fraction of what she used to.

A rise in domestic violence has aggravated the situation with women having little recourse to societal or legal support with many Palestinians believing that this is a private matter between spouses.

Under Palestinian law, the few men that are arrested for “honour killings” receive little jail time and women beaten by husbands would have to be hospitalised for at least 10 days before police would consider intervening.

According to PCHR’s documentation, 16 women were killed last year in different contexts related to gender-based violence.

Last year, U.N. Women in Palestine released a statement saying that they it was “seriously concerned” about the killings, highlighting that the “worrying increase in the rate of femicide demonstrated a widespread sense of impunity in killing women”.

A 2012 survey by the Palestinian Central Bureau of Statistics (PCBS) said that 37 percent of Palestinian women were subject to some form of violence at the hands of their husbands, with the highest rate in Gaza at 58.1 percent and the lowest in Ramallah at 14.1 percent.

Gaza’s Palestinian Centre for Democracy and Conflict Resolution (PCDCR) explained that the difficult economic circumstances, poverty and unemployment, were the reasons behind the spike in domestic violence.

“These factors reflect negatively on men’s psychological status. They became more stressed and angry as they can’t support their families financially, live in crowded conditions and have no privacy,” PCDCR told IPS.

“There has also been a reversal in gender roles where women accept low-paying jobs which men consider below their status as the head of families or single women/widows are forced to take on the breadwinner role.

“This has all fed into men’s feelings of inadequacy and to them taking their frustrations out on their female relatives,” PCDCR told IPS.