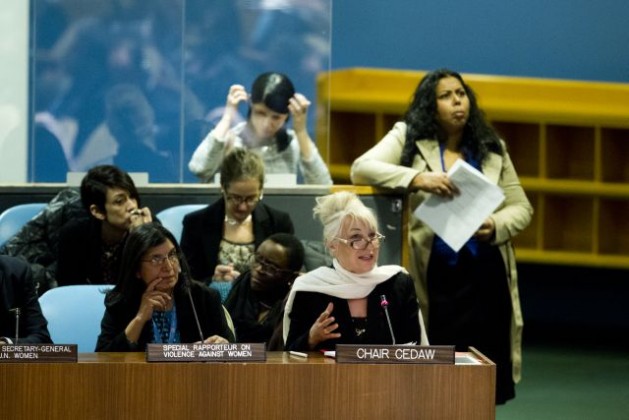 A scene from the 57th Commission on the Status of Women. Credit: UN Photo/Rick Bajornas

UNITED NATIONS, Mar 5 2015 (IPS) - The meeting is billed as one of the biggest single gatherings of women activists under one roof.

According to the United Nations, over 1,100 non-governmental organisations (NGOs) and more than 8,600 representatives have registered to participate in this year’s session of the Commission on the Status of Women (CSW).

“This is a reality check on the part of the member states." -- Mavic Cabrera-Balleza of the Global Network of Women Peacebuilders

Described as the primary intergovernmental body mandated to promote gender equality and the empowerment of women, the 45-member CSW will hold its 59th sessions Mar. 9-20.

About 200 side events, hosted by governments and U.N. agencies, are planned alongside official meetings of the CSW, plus an additional 450 parallel events by civil society organisations (CSOs), both in and outside the United Nations.

Their primary mission: to take stock of the successes and failures of the 20-year Platform for Action adopted at the historic 1995 Women’s Conference in Beijing. The achievements are limited, say CSOs and U.N. officials, but the unfulfilled promises are countless.

They should “genuinely challenge and dismantle the power structures and dynamics which perpetuate discrimination against women.”

Yasmeen Hassan, global executive director of Equality Now, told IPS in the Beijing Platform for Action, 189 governments pledged to “revoke any remaining laws that discriminate on the basis of sex”.

Twenty years later, just over half of the sex discriminatory laws highlighted in three successive Equality Now reports have been revised, appealed or amended, she said.

“Although we applaud the governments that took positive action, we are concerned that so many sex discriminatory laws remain on the books around the world,” Hassan noted.

Mavic Cabrera-Balleza, international coordinator at Global Network of Women Peacebuilders, a programme partner of the International Civil Society Action Network, told IPS she was happy to see the latest draft of the Beijing + 20 Political Declaration, presented by the Bureau of the CSW, expressing “concern that progress has been slow and uneven and that major gaps and obstacles remain in the implementation of the 12 critical areas of concern of the Beijing Platform for Action.”

“And it [has] recognized that 20 years after the Fourth World Conference on Women [in Beijing], no country has achieved equality for women and girls; and that significant levels of inequality between women and men persist, and that some women and girls experience increased vulnerability and marginalization due to multiple and intersecting forms of discrimination.”

“This is a reality check on the part of the member states, which is welcomed by the Global Network of Women Peacebuilders and the rest of civil society,” she added.

Speaking specifically on reproductive health, Joseph Chamie, a former director of the U.N. Population Division, told IPS the work of the CSW is important and it has contributed to improving women’s lives.

Pointing out the important areas of health and mortality, he said, when the CSW was established seven decades ago, the average life expectancy at birth for a baby girl was about 45 years; today it is 72 years, which, by any standards, is a remarkable achievement.

With respect to reproductive health, he said, great strides have been achieved.

In addition to improved overall health and lower maternal mortality rates, most women today can decide on the number, timing and spacing of their children.

“Simply focusing attention, policies and programmes on the inequalities and biases that women and girls encounter, while largely ignoring those facing men and boys, will obstruct and delay efforts to attain true gender equality and the needed socio-economic development for everyone,” Chamie warned.

According to U.N. Women, only one in five parliamentarians is a woman.

Approximately 50 per cent of women worldwide are in paid employment, an increase from 40 per cent more than 20 years ago, with wage inequality persistent.

At the present rate of progress, said U.N. Women, it will take 81 years for women to achieve parity in employment.

In 2000, the groundbreaking Security Council resolution 1325 on women, peace and security recognised the need to increase women’s role in peacebuilding in post-conflict countries. Yet, from 1992 to 2011 only 4 per cent of signatories to peace agreements and nine per cent of negotiators at peace tables were women.

Hassan told IPS there are still laws that restrict women’s rights in marriage (women not allowed to enter and exist marriages on the same basis as men; appointing men as the head of a household; requiring wife obedience; allowing polygamy; setting different ages of marriage for girls and boys).

There are also laws that give women a lower personal status and less rights as citizens (women not being able to transmit their nationality to husbands and children; women’s evidence not equal to that of a man; restriction on women traveling).

And women being treated as economically unequal to men (less rights to inheritance or property ownership; restrictions on employment); and laws that promote violence against women (giving men the right to rape their wives; exempting rapists from punishment for marrying their victims; allowing men to chastise their wives).

“The fact that these laws continue to exist shows that many governments do not consider women to be full citizens and as such it is not possible to make progress on the goals set 20 years ago,” Hassan said.

This is where the crux of the matter lies, she said.

“We’ve heard these promises many times before from past CSW sessions and yet recent data, such as those from the World Health Organisation (WHO), indicate the following:

– 35 percent of women worldwide have experienced either intimate partner violence or non-partner sexual violence in their lifetime;

– on average, 30 percent of women who have been in a relationship report that they have experienced some form of physical or sexual violence by their partner.”

Globally, she said, as many as 38 percent of murders of women are committed by an intimate partner.

She predicted that issues of sexual and reproductive health and rights, including lesbian, gay, bisexual and transgender (LGBT) rights will remain contentious in this CSW, as in previous years.

“It also worries me that while thousands of women have died and many more continue to suffer because of ongoing conflicts as well as violent extremism around the world, none of this is addressed in the political declaration.”

Sadly, the U.N. continues to operate in silos, she said. The Security Council remains disconnected with the Economic and Social Council (ECOSOC) under which the CSW functions.

“Having said all of this, I want us, in civil society, to push the envelope as far as possible in this 59th CSW session,” she added.