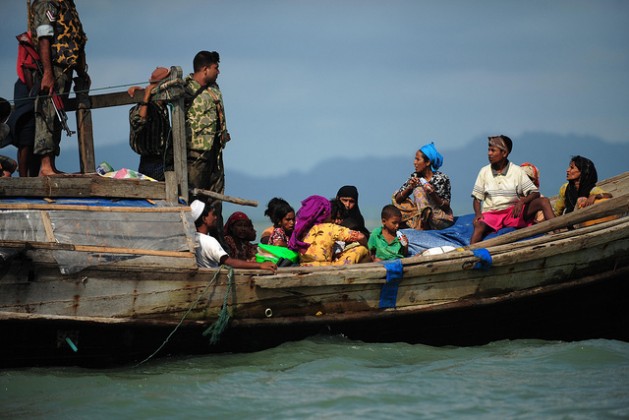 This photo, taken in 2012, shows desperate Rohingya refugees from Myanmar attempting to get past border patrol guards in Bangladesh. Now, in 2015, a fresh exodus of mainly Rohingya migrants from Myanmar and Bangladesh has the international community on edge. Credit: Anurup Titu/IPS

UNITED NATIONS, May 16 2015 (IPS) - On Thursday, May 14, a group of journalists rented a boat from Ko Lipe, a small island in Thailand’s southwest Satun Province, and headed out into the Andaman Sea – a water body in the northeastern Indian Ocean bounded by Myanmar, Thailand, Malaysia, Indonesia and the Strait of Malacca.

Ten miles into the journey, they came upon a sight not often spied in these waters: a three-storey, rickety wooden vessel, filled with ragged men, women and children who, upon seeing the boatload of journalists, began crying out for help.

“We don’t have a flotilla to go out and help them, but there are plenty of countries in the region that do, and plenty of reasons for them to do it – if they don’t, they’ll be dealing with a floating graveyard soon, rather than a flotilla of ships." -- Leonard Doyle, director of media and communications for the International Organisation for Migration (IOM)
This ship and its desperate human cargo – hundreds of migrants from the Rohingya Muslim community in Myanmar and Bangladesh – now symbolizes the plight of a persecuted people, and the harsh migration policies of a handful of Southeast Asian countries that have resulted in a game of ‘maritime Ping-Pong’ played out with human lives.

According to the International Organisation for Migration (IOM), smugglers abandoned the ship and its passengers after failing to dock in Thailand as a result of that country’s harsh crackdown on what it calls “illegal” maritime arrivals, but what rights activists say are beleaguered citizens fleeing ethnic persecution and economic hardship in their native lands.

Earlier, the boat made a failed attempt to land in Malaysia, and on Friday Thai authorities moved the vessel further out to sea, claiming that its passengers wanted to carry on with their journey – an unlikely scenario given that the emaciated group of refugees have been out at sea for three months, and have little to no food or water left onboard.

And they are not the only ones – the IOM estimates that some 6,000 people out of roughly 8,000 who have been out at sea since early March remain marooned off the coasts of Thailand, Indonesia and Malaysia.

These countries, all members of the Association of Southeast Asian Nations (ASEAN), have taken an uneven approach to the refugee crisis: the IOM says some 1,500 people have managed to disembark in Malaysia and Indonesia, while thousands of others have been turned away, with the navies of each respective country going so far as to tow some of the boats further out to see.

A statement issued through the spokesperson of the United Nations Secretary-General Thursday called on governments in the region to respond to the crisis by upholding international obligations, including the prohibition on ‘refoulement’ – the forcible return of persecuted individuals to their country of origin.

The U.N. chief also asked governments to “facilitate timely disembarkation and keep their borders and ports open in order to help the vulnerable people who are in need.”

However, these requests have so far gone unheeded.

Alarmed by the plight of those stranded out at sea, the IOM on Friday released one million dollars from its Migration Emergency Funding Mechanism, with the aim of expanding relief to refugees on shore and assisting those still on the water.

While the fund will provide potentially life-saving emergency aid to hundreds of people, “it’s really up to countries nearby to respond,” IOM Director of Media and Communications Leonard Doyle told IPS.

He said the emergency funds will be used to provide desperate migrants with whatever they might need, but they have to be brought ashore first.

“We don’t have a flotilla to go out and help them, but there are plenty of countries in the region that do, and plenty of reasons for them to do it – if they don’t, they’ll be dealing with a floating graveyard soon, rather than a flotilla of ships,” he stressed.

At the very least, he said, powerful emerging countries within range of the crisis should use their naval capacity to bring those needing medical attention ashore – it is believed that pregnant women are among the migrants still drifting well within reach of land – but no government has so far demonstrated a willingness to do so.

Risking death to flee their homes

The United Nations High Commissioner for Refugees (UNHCR) believes that about 25,000 people “departed irregularly by sea” from the Bay of Bengal in the first quarter of 2015 – double the departure rate for the two preceding years.

The U.N. agency also says an estimated 300 people have died out at sea since October 2014, from starvation, dehydration or after being beaten severely by boat crews.

Hailing largely from Bangladesh and Myanmar, passengers pay between 90 and 370 dollars to board these ships, in addition to the thousands of dollars they might pay moneylenders in interest rates, or to immigration officials for their freedom once they land on safer shores.

The sudden spike in departures could be driven by a number of factors, not least of which the harsh conditions in IDP camps in Myanmar where over 140,000 refugees, the majority of whom identify as Rohingya Muslims, have been interned since inter-communal violence in the country’s western Rakhine State displaced them from their homes nearly three years ago.

Other reasons for the exodus include economic hardships, or ethnic persecution, the U.N. says.

That so many are willing to risk death by drowning for a mere chance of a better life speaks volumes of their plight in their home countries.

An IOM statement released Friday explained, “In the past three years, an estimated 160,000 migrants from the coasts of Myanmar and Bangladesh were smuggled by boat to Thailand before being brought overland to Malaysia.”

But the discovery in early May of mass graves in smuggling camps drove a major crackdown on migrants in both countries, resulting in the current regional stalemate.

These and other issues are expected to be the focus of a regional summit scheduled to take place later this month, which U.N. Chief Ban Ki-moon called an opportunity “for all leaders of Southeast Asia to intensify individual and collective efforts to address this worrying situation and tackle the root causes, of which the push factors are often human rights violations.”

Others believe that such a settlement, if it comes at all, will come too late.

“These people are not going to last that long,” IOM’s Doyle told IPS. “They need to be rescued now and that’s what we’ve been calling for. As you can imagine, one day out on a boat is enough, but these people have been out there for [months]… This is shocking, really shocking treatment of human beings.”