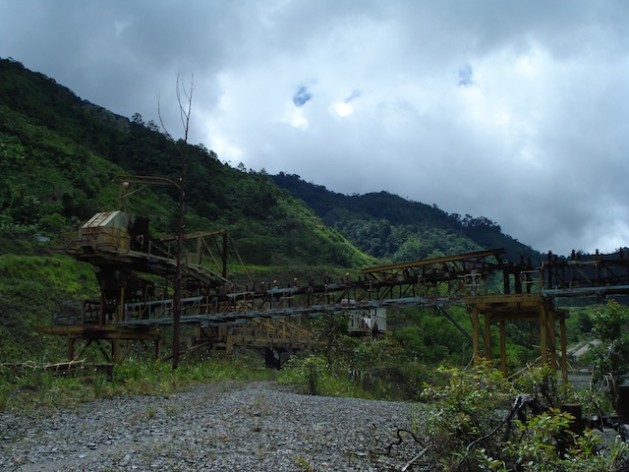 CANBERRA, Australia, May 22 2015 (IPS) - From Arawa, once the capital city of Bougainville, an autonomous region in eastern Papua New Guinea in the southwest Pacific Ocean, a long, winding road leads high up into the Crown Prince Ranges in the centre of the island through impenetrable rainforest.

Over a ridge, the verdant canopy gives way to a landscape of gouged earth and, in the centre, a gaping crater, six kilometres long, is surrounded by the relics of gutted trucks and mine machinery rusting away into dust under the South Pacific sun.

“The crisis was a fight for all people who are oppressed in the world. During the crisis the people fought for what is right; the right of the land." -- Greg Doraa, a Panguna district chief
The place still resonates with the spirit of the indigenous Nasioi people who waged an armed struggle between 1989 and 1997, following an uprising to shut down one of the world’s largest open-cut copper mines, built with the aim of extracting the approximately one billion tonnes of ore that lay beneath the fertile land.

Operated by Bougainville Copper Limited, a subsidiary of Conzinc Rio Tinto of Australia, the Panguna mine generated about two billion dollars in revenues from 1972-1989. But the majority owners, Rio Tinto (53.58 percent) and the Papua New Guinea government (19.06 percent), received the bulk of the profits, while indigenous landowners were denied any substantive rights under the mining agreement.

Local communities watched as villages were forcibly displaced, customary land became unrecognisable under tonnes of waste rock, and the local Jaba River became contaminated with mine tailings, choking the waters and poisoning the fish.

Inequality widened as mine jobs enriched a small minority; of an estimated population in the 1980s of 150,000, about 1,300 were employed in the mine’s operating workforce.

When, in 1989, a demand for compensation of 10 billion kina (3.7 billion dollars) was refused, landowners mobilised and brought the corporate venture to a standstill by targeting its power supply and critical installations with explosives.

A civil war between the Bougainville Revolutionary Army and the Papua New Guinea Defence Forces ensued until a ceasefire brought an end to the fighting in 1997 – but not before the death toll reached an estimated 15,000 to 20,000 people, representing approximately 13 percent of the population at the time.

“The crisis was a fight for all people who are oppressed in the world. During the crisis the people fought for what is right; the right of the land,” Greg Doraa, a Panguna district chief, recounted.

Now, although the region of 300,000 people has secured a degree of autonomy from Papua New Guinea, the spectre of mining is still present, and with a general election underway, options for economic development are hotly debated.

For the political elite, only mining can generate the large revenues needed to fulfil political ambitions as a referendum on independence from PNG, to be held by 2020, approaches. 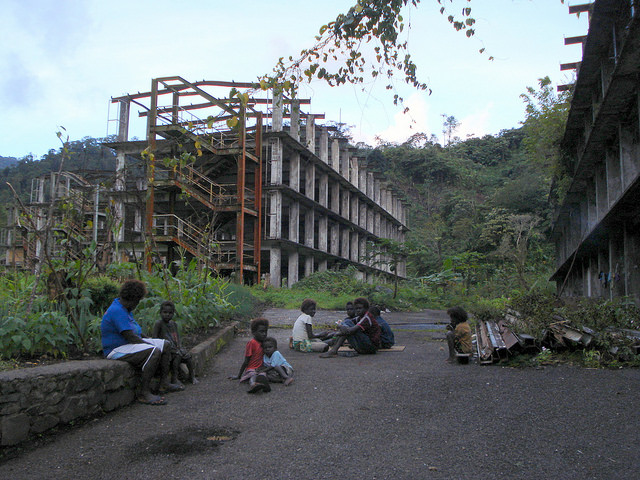 But for many landowners and farming communities, a far more sustainable option would be to develop the region’s rich agricultural and eco-tourism potential.

This has boosted local incomes, but not government revenue due to the absence of taxation.

“Even if a turnover tax of 10 percent could be efficiently applied to these industries, it would produce only a small fraction of the government revenue required to support genuine autonomy,” Momis stated.

But according to Chris Baria, a local commentator on Bougainville affairs who was in Panguna at the time of the crisis, “due to the widely held perception in the government that mining is a quick and easy way out of cash shortage problems, there has been a lack of real focus on the agricultural and manufacturing sectors.”

“Bougainville has rich soil for growing crops, which can be sold as raw products or value-added to fetch good prices on the global market. Bougainville is also a potential tourist destination if the infrastructure is developed to cater for it.”

Last year the drawdown of mining powers from PNG to the autonomous region was completed with the passing of a transitional mining bill.

But at the grassroots many fear that a return to large-scale mining will lead to similar forms of inequity. Economic exclusion, which saw 94 percent of the estimated two billion dollars in revenue going to shareholders and the PNG government and 1.4 percent to local landowners, was a key factor that galvanised the Nasioi people to take up arms 25 years ago. 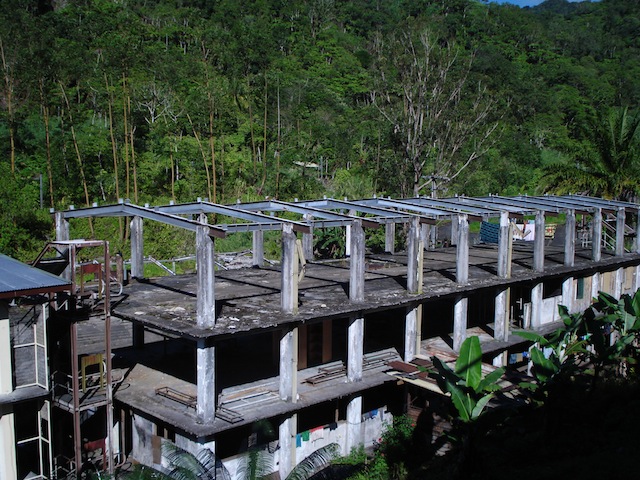 Rusting infrastructure in Central Bougainville still resonates with the spirit of the indigenous Nasioi people who waged an armed struggle between 1989 and 1997, following an uprising to shut down one of the world’s largest open-cut copper mines. Credit: Catherine Wilson/IPS

“Current development trends will only benefit the educated elite and politicians who have access to opportunities through employment and commissions paid by the resource developers to come in and extract the resources,” Baria claims, “[while] ordinary people become mere spectators to all that is happening in their midst.”

Since the 2001 peace agreement, reconstruction has been slow, with the Autonomous Bougainville Government still financially dependent on the government of Papua New Guinea and international donors.

In some places, for example, roads and bridges have been repaired, airports opened, and police resources improved. But there is also incomplete disarmament, poor rural access to basic services and high rates of domestic and sexual violence exacerbated by largely untreated post-conflict trauma.

The province has just 10 doctors serving more than a quarter of a million people, less than one percent of people are connected to electricity and life expectancy is just 59 years.

Less than five percent of the population has access to sanitation, reports World Vision, and one third of children are not in school, in addition to a “lost generation” of youth who missed out on education during the conflict years.

Delwin Ketsian, president of the Bougainville Women in Agriculture development organisation, told IPS, “Eighty percent of Bougainville women do not support the reopening of the mine. Bougainville is a matrilineal [society], our land is our resource and we [want] to toil our own land, instead of foreigners coming in to destroy it.” In North and Central Bougainville, women are the traditional landowners.

A recent study of 82 people living in the mine-affected area showed strong support for the development of horticulture, animal farming, fisheries and fish farming.

“The government should support farmers to go into vegetable farming, cocoa, copra, spices and fishing, then proceed to downstream processing which we women believe will boost the economy of Bougainville, thus also improving our livelihoods and earning sustainable incomes,” Ketsian said.

Prior to mining operations, communities in the Panguna area practised subsistence and small-holder agriculture, with families planting crops like taro and breadfruit trees, and fishing in the river. But the mine destroyed the soil and water, so that traditional crops no longer grow as they used to, according to local residents.

Before the civil war, cocoa was the mainstay of up to 77 percent of rural families with those in the mine-affected area earning on average 807 kina (299 dollars) per year, higher than mine compensation payments of 500 kina (185 dollars) per annum.

While the conflict decimated production from 12,903 tons in 1988 to 2,619 tons in 1996, it had rebounded about 48 percent by 2006. Still the sector’s growth has been constrained by poor transportation, training and market access, the cocoa pod borer pest, which has impacted harvests in the region’s north since 2009, and the substantial control of trade and export by companies located in other provinces, such as nearby East New Britain.

“We have creative and talented people in Bougainville […] but the system of education we have teaches people to work for other people. We should adopt education and training that enables a person to create opportunity and not dependency,” he advocated.

After a new government is announced in June, the people of Bougainville face critical decisions about their future during the next five years. But if development justice is vital for a peaceful and sustainable future, then history should urge caution about economic dependence on mineral resources.

This article is part of a special series entitled ‘The Future Is Now: Inside the World’s Most Sustainable Communities’. Read other articles in the series here.