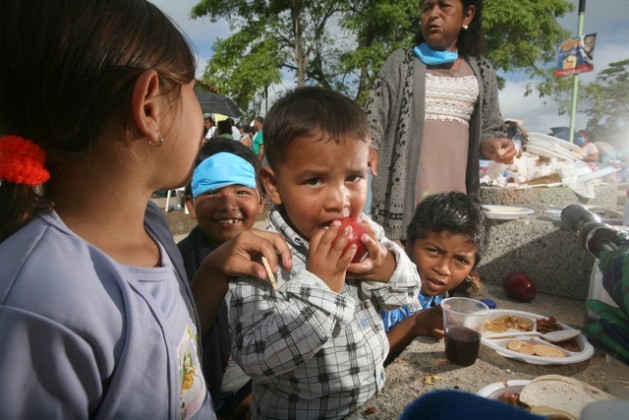 Food distribution in a town in the Mexican state of Tabasco through one of the many government programmes created in Latin America in the last 15 years to fight hunger. Credit: Mauricio Ramos/IPS

SANTIAGO, May 29 2015 (IPS) - The Latin American and Caribbean region is the first in the world to reach the two global targets for reducing hunger. Nevertheless, more than 34 million people still go hungry.

“This is the region that best understood the problem of hunger, and it’s the region that has put the greatest emphasis on policies to assist vulnerable groups. The results achieved have been in accordance with that emphasis,” FAO regional representative Raúl Benítez told IPS.

According to The State of Food Insecurity in the World (SOFI) 2015 report, released Wednesday by the United Nations Food and Agriculture Organisation (FAO), hunger affects 5.5 percent of the population of Latin America – or 34.3 million people.

That means the region has met the target of halving the proportion of hungry people from 1990 levels, established by the Millennium Development Goals (MDGs) adopted by the international community in 2000, with a 2015 deadline.

These statistics also show that the region has lived up to what was agreed at the 1996 World Food Summit.

According to SOFI, 28 percent of the population of Latin America, estimated at a total of 605 million people, lives in poverty, compared to 44 percent in 2002. By contrast, the progress in reducing extreme poverty stalled two years ago.

With respect to the eradication of hunger, SOFI reports that South America made the greatest progress between the periods of 1990-1992 and 2012-2016. But South America, which accounts for 66 percent of the region’s total population, also has the largest number of undernourished people.

In that period, Central America also managed to reduce the number of hungry people, from 12.6 million to 11.4 million. However, the reduction in hunger has slowed down since 2013.

The Caribbean is lagging the most, with 7.5 million hungry people. That is mainly due to the situation in Haiti, the poorest country in the hemisphere, where 75 percent of the Caribbean’s malnourished people live, the report states.

Haiti’s problems are deep-rooted, Eve Crowley, FAO deputy regional representative, said Thursday during the launch of the report at the agency’s regional office in Chile. They date back centuries and are linked to colonialism and land distribution, she added.

“The recent problem of political instability is a very important factor that has had a negative impact on economic growth,” she said. “Historical problems take a long time to fix.”

On the other hand, more than 30 million people in Latin America and the Caribbean have overcome hunger in the last 20 years, “revealing in the process a valuable repertoire of public policies that can serve as a basis for other contexts and regions,” the report says. According to FAO, the improvements in food and nutritional security in the region were largely due to the “positive macroeconomic backdrop in the region during the last decade as well as the political commitment to fighting food insecurity exhibited by the countries of Latin America and the Caribbean.”

The most recent expression of this commitment, Benítez told IPS, was the approval of the Food Security, Nutrition and Hunger Eradication Plan of the Community of Latin American and Caribbean States (CELAC).

The plan, a pioneer at the international level, proposes eliminating hunger by 2025 – a goal that encompasses several challenges, like mitigating the effects of climate change that mainly affect small-scale family farmers and the poor, who live in more complex, fragile ecosystems, Benítez said.

The task then is adaptation to climate change to achieve sustainable food production systems.

The challenges also include successfully weathering the economic slowdown that is not only affecting this region.

“The dangers of backsliding are always latent,” the FAO representative warned. “We have to raise awareness about the fact that this continues to affect millions of women, men and children in the region.

“Hunger deprives people of education, of health, even of citizenship, but it principally deprives people of freedom, and this affects all of us: the hungry and those who have full stomachs. We can’t allow any one of our Latin American or Caribbean sisters or brothers to continue to go hungry,” he added.

Benítez pointed out that in Latin America and the Caribbean the problem is not a lack of food, but the fact that the poor can’t afford it.

“It’s a problem of access, not production,” he stressed.

“Hunger is much more than a plate of food on a table, and it’s still a problem that affects all of us. It’s a regional problem, which means it needs a regional-level solution.”

Benítez said that “while all countries have been reducing the proportion of people who have managed to overcome the problem of hunger, some have done so faster than others.

“That means countries with more experience or the richest countries in the region have to help other countries, in order for them to speed up the process of eradicating hunger.”

Francisca Quiroga, a public policy expert at the University of Chile, told IPS that this new stage must be spearheaded by a change in model, from the current “extractivist” model to a new one based on more suitable forms of development and higher-quality public policies.

“Many social policies implemented by countries in the region with the aim of meeting the MDGs were focused on improving indicators or reducing the gaps based on statistics, but they failed to focus on issues that are so important for this region, such as inequality,” she said.

New problems have also arisen, such as the impact of climate change or access to the development of natural resources, or the poor quality of food, which means the new model must be sustainable, the academic added.

At the end of this year the MDGs will be replaced by the Sustainable Development Goals (SDGs), where the reduction of hunger is accompanied by other challenges involving food, such as the dangerous increase in obesity, which is becoming a major new global problem, Benítez said.

“The problem of obesity is something that we cannot stop analysing, because it has a severe impact on our populations,” she said. “It’s not as serious yet as the problem of hunger, but it threatens to become so.”