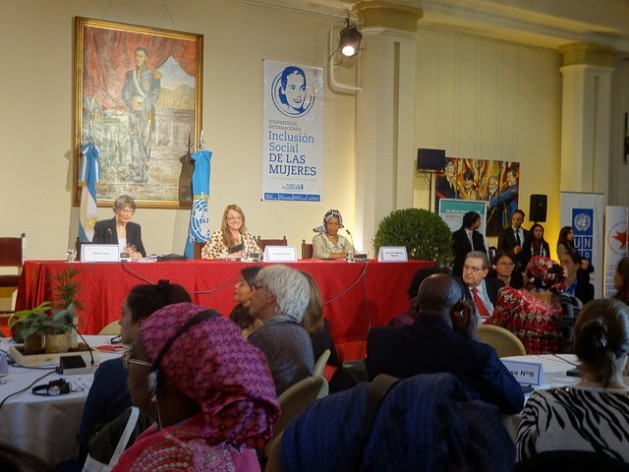 The first day of the “Women and Social Inclusion: From Beijing to Post-2015” global conference, Wednesday May 6, in the Palacio San Martín, the seat of Argentina’s Foreign Ministry. Credit: Fabiana Frayssinet/IPS

BUENOS AIRES, May 8 2015 (IPS) - Although they do not specifically target women, social policies like family allowances and pensions have improved the lives of women in Latin America, the region that has made the biggest strides so far this century in terms of gender equality, although there is still a long way to go.

Luiza Carvalho of Brazil, U.N. Women’s regional director for the Americas and the Caribbean, said that can be seen in each report by her agency.

“It’s interesting to note that of all of the world’s regions, Latin America has in fact shown the greatest progress,” Carvalho said in an interview with IPS during the global conference “Women and Social Inclusion: From Beijing to Post-2015”, held in the Argentine capital from Wednesday May 6 to Friday May 8.

The advances made in Latin America, Carvalho said, “were not so much a result of economic policies; on the contrary, they were the result of social policies, which although not necessarily specifically aimed at women, ended up benefiting them a great deal, directly and indirectly.”

“Women depend on a web of social and economic policies…All policies, on the various levels, influence women and can improve or aggravate gender inequality. -- Luiza Carvalho

Other measures that have had a positive impact were the improvement of the minimum wage, which did not include a gender perspective but benefited women, who are disproportionately paid low wages. That bolstered their purchasing power and as a result their decision-making capacity and “their control over some domestic matters,” Carvalho said.

The same was true of initiatives aimed at protecting informal sector workers, and the creation of non-contributory pensions, among which Carvalho mentioned those of Argentina, Bolivia, Brazil, Colombia, Costa Rica and Mexico.

As a result of the various cash transfer programmes, “there is no doubt that extreme poverty was reduced throughout Latin America,” she said. “With improved buying power, a higher minimum wage, and the expansion of non-contributory pensions there was also a significant modification in gender inequality.”

But she argued that these programmes have a handicap: they put an emphasis on the responsibility of women as mothers.

“The conditions set are for women,” she said. “Women have to help children stay in school, women have to get their children vaccinated. And those conditions do not reinforce a more responsible role for men in child-rearing.”

“If we want to go beyond these achievements, policies should be focalised,” said Jessica Faieta, the U.N. Development Programme’s regional director, referring to what she called “second-generation social policies.”

“These should be policies directly targeting the inclusion of women in development gains, which have not reached everyone,” Faieta told IPS.

She said women – especially rural, indigenous and black women – stood out among the “excluded groups”.

Faieta stressed that inclusion of women has a positive impact on poverty eradication.

For her part, Carvalho described it as a “virtuous circle” of development.

Faieta said: “It has been proven that including women brings broader returns. Employing more women and paying them more equal wages has benefits that go beyond women, to their families.”

“Latin America understands that clearly. So much that we are seeing the expansion of these programmes in Africa and their introduction in Asia, which are replicating Latin America’s positive experiences,” said Carvalho. To shore up that process, the UNDP and Brazil’s Institute of Applied Economic Research (IPEA) are currently working on systematising the regional initiatives.

“There is a very significant possibility of South-South cooperation,” Faieta said.

The meeting organised by the UNDP, U.N. Women and the Argentine government drew delegates from different regions, to reflect on persistent and new challenges facing girls and women living in poverty around the world, 20 years after the Fourth World Conference on Women in Beijing.

Among the challenges seen at a regional level, Carvalho mentioned the still-high maternal mortality rates, violence against women, and its most serious expression: femicide or misogynist or gender-related murders.

“Of the 28 countries with the highest rates of femicide in the world, 14 are in our region,” she pointed out.

She attributed that phenomenon to “the failure of governments to respond with prevention measures, an entrenched ‘machista’ culture, a view of women as property or as part of a man’s private collection, and legal questions that block women’s access to land or credit.”

“Economic empowerment of women” is another pending challenge in Latin America, Faieta said. Despite the advances made in the region, “women still suffer the most from unemployment. And women are still paid less for the same work,” she pointed out.

Nevertheless, the report “Progress of the World’s Women 2015-2016: Transforming Economies, Realizing Rights”, launched Apr. 27 by U.N. Women, reflects the progress made, stating that between 1990 and 2013, the biggest increase in women’s participation in the labour market occurred in Latin America.

During that period, their participation rose from 40 to 54 percent – although it remained far below men’s participation, which stood at 80 percent.

With respect to the persistent gender pay gap: the report adds that while women earn on average 24 percent less than men globally, in Latin America and the Caribbean the figure is 19 percent.

And in all Latin American countries that carry out time use surveys, women dedicate two to five times as much time as men to unremunerated work.

Other achievements were the political inclusion of women, in the region with the largest number of female heads of state and government.

Eleven countries passed laws establishing quotas for women’s political participation; 26.4 percent of lawmakers are women; and on average 22.4 percent of government ministers are women – the highest proportion of all regions, although still not high enough for an inclusive democracy, Faieta said.

“It is clear that conditional cash transfers won’t fix everything,” Carvalho clarified. “For that reason other policies must also be implemented.”

That includes specific gender policies as well as macroeconomic, fiscal and monetary policies.

Carvalho criticised cuts in social programmes “that affect society as a whole but especially women because they undermine education and health policies, and others that increase their domestic burden.”

“Women depend on a web of social and economic policies…All policies, on the various levels, influence women and can improve or aggravate gender inequality,” she said.

Clark, the UNDP chief, said that in the global Post-2015 development agenda, to be defined in December, it is essential to guarantee that all policies contain a gender perspective.