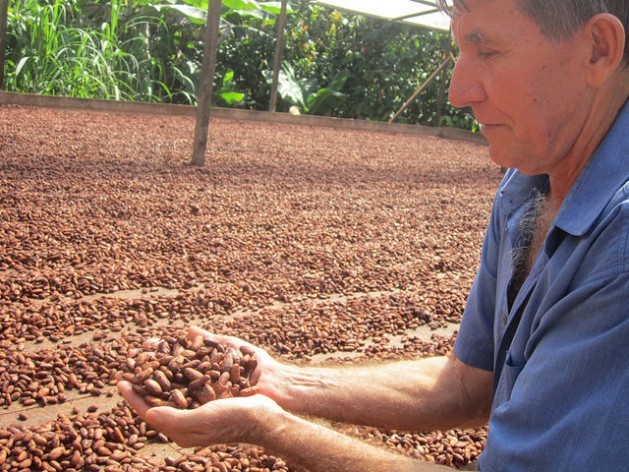 MEDICILÂNDIA, Brazil, Jun 11 2015 (IPS) - “Now we realise what a paradise we live in,” said Darcirio Wronski, a leader of the organic cacao producers in the region where the Trans-Amazonian highway cuts across the Xingú river basin in northern Brazil.

Besides cacao, on their 100 hectares of land he grows bananas, passion fruit, cupuazú (Theobroma grandiflorum), pineapples and other native or exotic fruit with which his wife, Rosalina Brighanti, makes preserves that she sells as jams or jellies or uses as filling in homemade chocolate bars that she and her assistants make.

All of the products are labeled as certifiably organic.

But the situation they found in the 1970s was more like hell than paradise, they said, when they migrated separately from southern Brazil to Medicilândia, a town known as the “capital of cacao”, where they met, married in 1980 and had four children, who work with them on the farm.

They were drawn to the Amazon rainforest by misleading ads published by the then military dictatorship, which promised land with infrastructure and healthcare and schools in settlements created by the National Institute of Colonisation and Agrarian Reform.

The aim was to populate the Amazon, which the de facto government considered a demographic vacuum vulnerable to invasions from abroad or to international machinations that could undermine Brazil’s sovereignty over the immense jungle with its rivers and possible mineral wealth.

The Trans-Amazonian highway, which was to run 4,965 km horizontally across the country from the northeast all the way to the west, was to link the rainforest to the rest of the nation. And thousands of rural families from other regions settled along the road.

The unfinished highway, unpaved and without proper bridges, became impassable along many stretches, especially in the rainy season. The settlers ended up isolated and abandoned, practically cut off from the rest of the world, and large swathes of land were deforested. 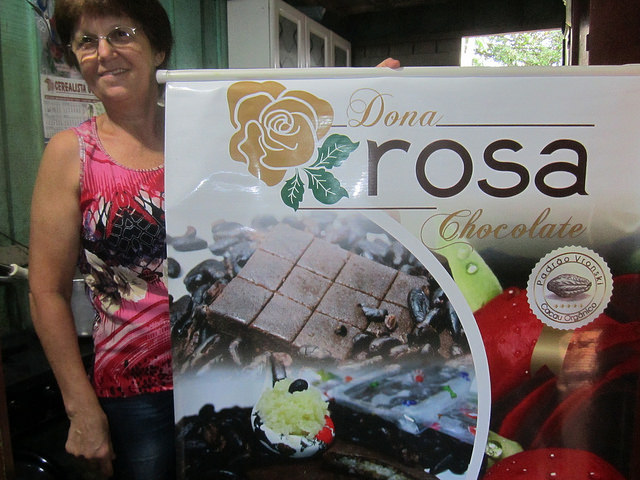 Rosalina Brighanti or Doña Rosa in her kitchen, where she makes jams and preserves, holding a sign advertising the organic chocolates made with the family’s special recipes, which are popular with consumers and businesses in Brazil and abroad. Credit: Mario Osava/IPS

Medicilândia is a product of that process. The city’s name pays homage to General Garrastazú Médici, president from 1969 to 1974, who inaugurated the Trans-Amazonian highway in 1972. The town emerged on kilometer 90 of the highway, and was recognised in 1989 as a municipality, home today to some 29,000 people.

“For the pioneers of the colonisation process it was torture, there was nothing to buy or sell here,” said 55-year-old Rosalina Brighanti, who everyone knows as Doña Rosa. “Some foods we could only get in Altamira, 100 km away along an unpaved road.”

Her husband Wronski, originally from the southern state of Santa Catarina, where his father had a small farm, impossible to divide between 10 sons and daughters, followed “the Amazonian dream.”

After running into failure with traditional crops like rice and beans, Wronski ended up buying a farm and planting cacao, a local crop encouraged by the government by means of incentives.

His decision to go organic accelerated the reforestation of his land, where sugarcane used to grow.

Cacao is increasingly looking like an alternative for the generation of jobs and incomes to mitigate local unemployment once construction is completed on the giant Belo Monte hydropower dam on the Xingú river, near Altamira, the capital of the region which encompasses 11 municipalities.

The dam’s turbines will gradually begin operating, from this year to 2019. 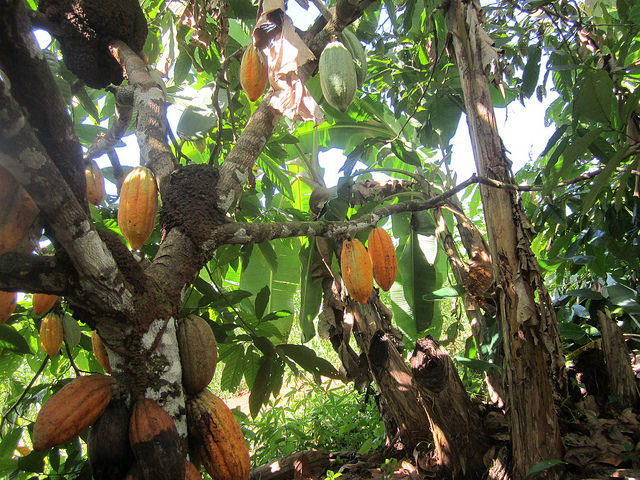 A cacao tree laden with beans, in the shade of banana trees on the Wronski family farm in Medicilândia, a municipality in the Brazilian Amazon rainforest state of Pará, where organic farmers are helping to reforest the jungle. Credit: Mario Osava/IPS

The Belo Monte construction project has drawn labour power away from cacao production. “That has caused the loss of 30 percent of Medicilândia’s cacao harvest this year,” Wronski told IPS during a tour of his farm.

“I know a family that has 70,000 cacao plants, whose son is working on Belo Monte and not in the harvest,” the 64-year-old farmer said.

The hope is that workers will return to the cacao crop once large numbers of people start to be laid off as the construction of the dam comes to a close. For routine maintenance of the plants, only the families who live on the farms are needed, but additional workers are necessary at harvest time.

José “Cido” Tinte Zeferino, 57, brought his passion for growing coffee from the southern state of Paraná to the Trans-Amazonian highway. But since coffee production wasn’t feasible in that area, he tried several other crops until hitting on organic cacao in Brasil Novo, a municipality bordering Altamira and the Xingú river.

Today his passion is forestry – the huge trees he has planted or preserved on the 98-hectare farm he bought 15 years ago.

Cacao trees require deep shade, but according to other members of the cooperative Cido went overboard, at the expense of productivity. He says, however, that “I produce 2,800 to 3,000 kgs a year, and thanks to the better prices fetched by organic cacao, it’s enough to live on.”

What he likes most is being surrounded by the giant trees on his land; his house is invisible from the road, hidden behind the dense vegetation. He has completed the journey from settler to reforester.

Wronski and his wife Brighanti don’t have a seasonal labour problem. Six families – some of them relatives and others sharecroppers – live on their farm and take care of the cacao trees in exchange for half of the harvest.

They also hire seasonal workers from a nearby rural village where some 40 families live, most of whom do not grow their own crops.

Cacao farms employ large numbers of people because “the work is 100 percent manual; there are no machines to harvest and smash the beans,” local agricultural technician Alino Zavarise Bis, with the Executive Commission of the Cacao Cultivation Plan (CEPLAC), a state body that provides technical assistance and does research, told IPS.

Besides providing jobs and incomes for people in the countryside, cacao farming drives reforestation. Two-thirds of the population of the municipality of Medicilândia is still rural, and a view from the air shows that it has conserved the native forests.

That is because cacao trees need shade from taller trees. When the bushes are still small, banana trees are used for shade – which has led to a major increase in local production of bananas.

“We have the privilege of working in the shade,” joked Jedielcio Oliveira, sales and marketing coordinator of the Organic Production Programme carried out in the Trans-Amazonian/Xingú region by CEPLAC, other national institutions and the German Technical Cooperation Agency (GTZ).

But organic production is still small-scale, accounting for just one percent of total cacao output in the Amazon state of Pará, where Medicilândia is located.

Wronski presides over one of them, the Organic Production Cooperative of Amazonia, and he was just elected to head the Central Cooperative, recently created to coordinate the activities of the six organic cacao cooperatives, including marketing and sales.

“Organic cacao farmers are different – they are more aware of the need to preserve the environment, more focused on sustainability,” said CEPLAC’s Bis. “While conventional farmers are looking at productivity and profits, organic growers are interested in taking care of the family’s health and well-being, and preserving nature, although without ignoring profit margins, since they get better prices.”

New members have to be invited by a member of one of the cooperatives and approved in assembly, “and the process of conversion to organic takes three years, which is the time needed to detoxify the soil from the effects of chemical fertilisers and poisons,” he said. 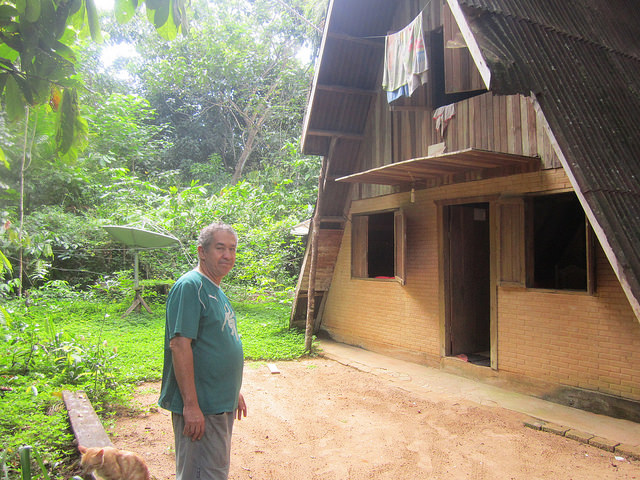 Cacao farmer José Tinte Zeferino, known as “Cido”, in front of his house, which is hidden by dense vegetation and surrounded by his cacao trees, in the municipality of Brasil Novo, near the Xingú river and the Trans-Amazonian highway. Credit: Mario Osava/IPS

“The entire production system has to be organic, and not just the final product,” another cacao producer, Raimundo Silva from Uruará, a municipality to the west of Medicilândia, who is responsible for commercial operations in the new Central Cooperative, told IPS.

Organic cacao from Pará supplies, for example, the Austrian firm Zotter Chocolate, which boasts 365 different flavours and sells only organic, fair trade chocolate. Among its clients in Brazil is Harald, which exports chocolates to more than 30 countries, and Natura Cosméticos.

The industry in general, although it prefers the more abundant and less costly standard cacao butter, also adds the richer organic cacao to produce the best quality chocolates.

Conventional cacao, which uses pesticides and other chemical products, is still predominant in Pará. A small chocolate factory, Cacauway, was founded in 2010 in Medicilândia by the Trans-Amazonian Agroindustrial Cooperative, which groups traditional producers of non-organic cacao.

“The future of cacao is in Pará, which has favourable conditions for production, like abundant rains, fertile soil, and family farmers who live on the land, unlike the large landowners who live in the cities,” said Bis.

Pará is surpassed by another northern state, Bahia, which accounts for two-thirds of national cacao production. But productivity in Pará averages 800 kg per tree – double the productivity of Bahia, the expert noted.

And cacao trees in the Amazon rainforest are more resistant to witch’s broom, a fungus that reduced the harvest in Bahia by 60 percent in the 1990s. At the time, Brazil was the world’s second-biggest producer, but it fell to sixth place, behind countries of West Africa, Indonesia and even neighbouring Ecuador.

This article forms part of a reporting series conceived in collaboration with Ecosocialist Horizons.