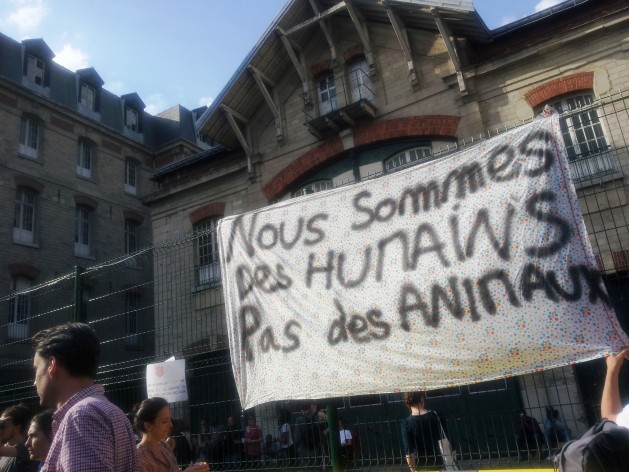 Migrants send a message – “We are humans, not animals”. Credit: Amnesty International France

PARIS, Jun 13 2015 (IPS) - Human rights groups are calling for a sustainable solution to the migrant crisis in Europe, especially following the dismantling of refugee camps in Paris and Calais, France, over the past two weeks.

In one of the latest incidents, tense confrontations occurred in the French capital when security forces evicted migrants from a park last Thursday, with activists later blocking the police from entering a former barracks where the migrants were temporarily sheltered.

“The state has a duty to ensure durable accommodation solutions for all those who seek asylum” – Marco Perolini, Amnesty International

Amnesty International, present as observer during the operation, said that the state needs to do more to find housing solutions for migrants who have been sleeping on the street and in public parks.

“If the state informed people, explained the regulations and offered decent shelters, then that would be fine,” he added. “But this is not the case. They are not providing enough shelters for migrants and asylum seekers.”

Some of the migrants in the park – at the Bois Dormoy in the city’s 18th district – had already been evicted from a makeshift camp set up under a metro overpass, where conditions had become increasingly unsanitary.

Others came from a second cleared camp in northern Paris where about 350 migrants had been living. Most of those affected are from Sudan but there are also Somalis, Eritreans, Egyptians and other nationalities among the groups, officials said. 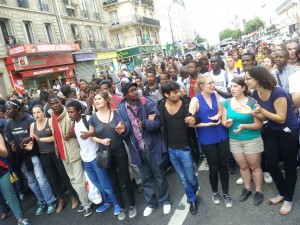 The authorities had additionally evicted about 140 migrants from two makeshifts camps in Calais, northern France, where more than 2,000 migrants have been living in rough conditions in tent settlements.

On Thursday, at the Bois Dormoy, in incidents that lasted late into the night, the migrants took steps to organise their own response to the security operations after they had been told to leave the park. They held meetings among themselves and liaised with activists – who have been providing food and support – to make their concerns known.

City officials initially offered about 60 places at state shelters but eventually increased the number to accommodate more of the migrants, following negotiations. Rights groups feared, however, that many would still remain homeless.

“The French authorities cannot just keep moving these migrants and asylum seekers from pillar to post without seeking viable alternatives – the state has a duty to ensure durable accommodation solutions for all those who seek asylum,” said Marco Perolini, Amnesty International’s Researcher on Discrimination in Europe.

“Real and viable alternative solutions must be found to give these migrants and refugees adequate shelter and services, including access to asylum procedures,” he added.

Other groups such as GISTI (Group for Information and Support to Immigrants), told IPS that they were also providing legal assistance to the migrants, with their lawyers representing asylum seekers at court hearings.

Meanwhile, the Mayor of Paris, Anne Hidalgo, said she would like to open a “welcome centre” for migrants who may be en route to other countries, or who may eventually decide to seek asylum in France.

“We are facing a huge increase in the numbers, and we need to open some kind of welcome centre,” she told French media. “One thing is certain – they cannot sleep on the streets.”

Such a centre would only be for temporary stays, and groups such as Amnesty International say that more permanent solutions are urgent and necessary.

This week, the European Commission, the executive branch of the 28-nation European Union (EU), called for member states to endorse its proposal to resettle 40,000 migrants as the boats keep arriving at Italian and Greek shores.

According to United Nations figures, more than 100,000 migrants have crossed the Mediterranean since the start of 2015, and about 1,800 have died in the perilous boat trips, as they flee poverty and warfare in their homelands.

Thousands have entered France, often in an attempt to reach other countries such as Britain.  But while both France and Britain are against the proposed EU quotas, the number of people who would be relocated in France is just a “drop in the ocean”, Oberreit of Amnesty International told IPS.

“We can’t keep looking at temporary solutions,” Oberreit warned. “Individuals must be able to have a proper process of their situation in order to have refugee status, and migrants must have some form of shelter so they don’t have to be out in the street and go hungry.”