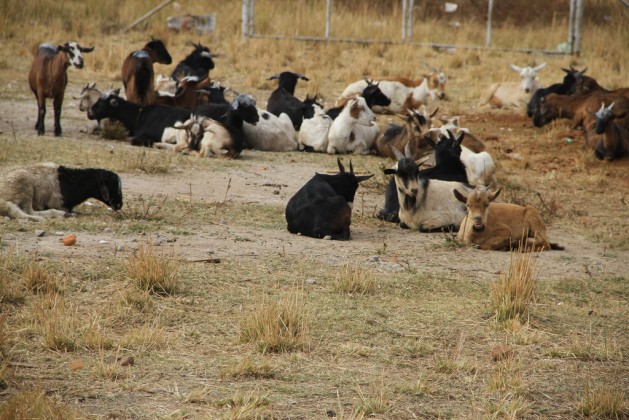 Many Zimbabweans are turning to raising small livestock like goats which survive dry conditions to avert climate change impacts that have claimed their cattle over the years. Credit: Jeffrey Moyo/IPS

HARARE, Jul 22 2015 (IPS) - With unusually hot and dry weather beating down on this Southern African nation, climate change and the accompanying drought have cost farmers much of their cattle herds. In response, many ranchers are turning to goats to preserve their livestock assets.

Climate change experts agree that breeding drought-tolerant animals like goats, which survive on shrubs and need less manpower to tend, is a better choice than high-maintenance cattle.

This is happening at a time the United Nations is urging nations the world over to take urgent action to combat climate change and manage its impact as part of the United Nations’ new Sustainable Development Goals (SDGs).

The SDGs are a universal set of 17 goals, targets and indicators that U.N. member states are expected to use as development benchmarks in framing their agendas and political policies over the next 15 years.

“With rainfall patterns fluctuating in Zimbabwe, rearing cattle is becoming unsustainable. But breeding goats, which are drought-tolerant, can be much more rewarding” – Happison Chikova, an independent Zimbabwean environment and climate change expert

“With rainfall patterns fluctuating in Zimbabwe, rearing cattle is becoming unsustainable.  But breeding goats, which are drought-tolerant, can be much more rewarding,” Happison Chikova, an independent environment and climate change expert, who holds a degree in geography and environmental studies from Zimbabwe’s Midlands State University, told IPS.

“Plans are imminent to boost production of goats in Zimbabwe’s dry regions where small livestock like goats thrive and we have identified meat export markets in countries like South Africa, Tanzania, Nigeria and the Middle East, where goat meat is a delicacy,” Chrispen Kadiramwando,  president of the Goat Breeders Association of Zimbabwe, told IPS.

Official statistics from the country’s Ministry of Small and Medium Enterprises and Cooperative Development show that there are approximately 136,000 goat breeders countrywide, ranging from ordinary communal goat breeders to peri-urban goat breeders.

Livias Ncube, from the country’s Region 5, the hottest part of the country in Mwenezi district, is one of the Zimbabweans who have shifted to goat-breeding, raising and selling.

“There are hardly adequate rains in this part of the country, which is the driest area here in Zimbabwe, but I don’t use any stock feeds to nourish my goats as they adapt to the conditions, and they are even fatter,” Ncube told IPS.

Besides selling the goats locally, Ncube told IPS that he has now become an exporter of goat meat to neighbouring countries like South Africa and Mozambique.

“Although I maintain a sizeable herd of cattle after a series of droughts here which killed many cows, I now have a flock of 130 goats and I’m also earning money through selling these goats,” Ncube told IPS.

Ncube said he earns an estimated 1600 dollars each month through goat selling, with each goat trading at around 70 dollars.  His goats multiply at a faster pace than cows in spite of the dry conditions in this region.

Through the Zimbabwe Livestock for Accelerated Recovery and Improved Resiliency (ZRR) programme, supported by the United States Agency for International Development (USAID), Ncube learned how to manage and market his goats to improve their livelihoods.

ZRR is a programme that provides farmers with training in goat husbandry and health management, and trains community livestock workers on preventative and curative animal health techniques.

According to a research paper by the Matobo Research station on goat breeding and development activities in Zimbabwe, there are already more than two million goats in Zimbabwe, with nearly all goats (about 98 percent) reared in communal areas.

However, agricultural experts fear that indigenous goat breeders are not realising the monetary value vested in their small livestock.

“Thousands of farmers are into goat breeding here, but few have been able to ascertain the value in their animals due to lack of adequate information flow between the goat producers and the market, resulting in rural farmers ending up engaging in barter trade thereby stifling the commercialisation of goats,” Leonard Vazungu, a government agricultural extension officer, told IPS.

At the beginning of this year, the Zimbabwean government distributed 10,000 goats for breeding stock and aims to increase the number to 44 million by 2018.

This comes at a time when this Southern African nation’s cattle population has declined from 6.8 million in 2000 to the current 5.2 million.

“Investing in small livestock like goats, which have higher chances of survival in drought-prone areas, cautions the country against livestock loss,” Barnabas Mawire, country director for Environment Africa, told journalists a climate change workshop held this month in the Zimbabwean capital, Harare.

But this may not be easy without a national climate change policy.

For Zimbabwe, financial shortfalls have not made the war against climate change any easier.

“The drop in government funding for climate change means we must work with other partners to move the climate change agenda forward and we are currently developing the national climate policy – the country’s first for which we need as many resources as we can get,” Veronica Gundu, principal environment officer for Zimbabwe’s Environment, Water and Climate ministry, told IPS.

However, with or without the national climate change policy, many Zimbabwean goat breeders like Ncube say they have moved single-handedly to address climate change impacts.

“We have moved on with our lives in the face of deepening climate change impacts and through goat breeding.  For us life goes on although climate change effects have claimed most of our cattle,” said Ncube.