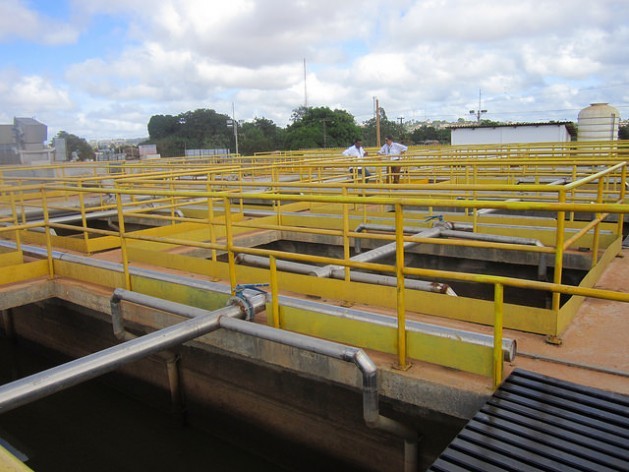 The Altamira water treatment plant is practically inactive because the sewer pipes installed 10 months ago in this city of 140,000 people have not been connected to the homes and businesses. Altamira is 50 km from the Belo Monte hydroelectric dam in Brazil’s Amazon jungle region. Credit. Mario Osava/IPS

ALTAMIRA, Brazil, Aug 31 2015 (IPS) - In the case of the Belo Monte hydroelectric dam in Brazil, the projects aimed at mitigating the social impacts have been delayed. But in other cases, infrastructure such as hospitals and water and sewage pipes could improve the image of the hydropower plants on Brazil’s Amazon rainforest rivers, turning them into a factor of effective local development.

Under construction since 2011 on the Xingú river, Belo Monte has dedicated an unprecedented amount of funds to compensating for the impacts of the dam, through its Basic Environmental Project (PBA), which has a budget of 900 million dollars at the current exchange rate.

To that is added a novel 140-million-dollar Sustainable Regional Development Plan (PDRS), aimed at driving public policies and improving the lives of the population of the dam’s area of influence, made up of 11 municipalities in the northern state of Pará.

These funds amount to 12.8 percent of the cost of the giant dam on the middle stretch of the Xingú river, one of the Amazon river’s major tributaries. If distributed per person, each one of the slightly more than 400,000 inhabitants of these 11 municipalities would receive 2,500 dollars.

But the funds invested by the company building the Belo Monte hydropower plant, Norte Energía, have not silenced the complaints and protests which, although they have come from small groups, undermine the claim that hydropower dams are the best energy solution for this electricity-hungry country.

“The slow pace at which the company carries out its compensatory actions is inverse to the speed at which it is building the hydropower plant,” complained the Altamira Defence Forum, an umbrella group of 22 organisations opposed to the dam.

The most visible delay has involved sanitation works in Altamira, the main city in the area surrounding the dam, home to one-third of the local population. Installed 10 months ago, the sewage and water pipes are not yet functioning, leaving the water and wastewater treatment plants partially idle.

The problem is that the pipes were not connected to the local homes and businesses, a task that has been caught up in stalled negotiations between Norte Energía, the city government and the Pará sanitation company, even after the company expressed a willingness to shoulder the costs.

“In addition, the storm drainage system was left out of the plans; the city government didn’t include it in the requirements and conditions set for the company,” the head of the Live, Produce and Preserve Foundation, João Batista Pereira, told IPS. 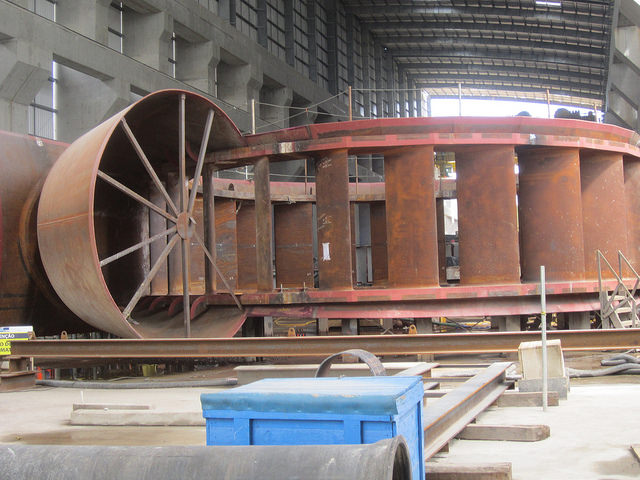 Part of one of the 18 big turbines that will generate electricity in the main Belo Monte plant, ready to be inserted into one of the big circular metal holes built in the giant dam in the Brazilian Amazon. Credit: Mario Osava/IPS

The lack of storm drains is especially destructive for cities in the Amazon rainforest, where torrential rains are frequent.

The works and services included in the PBA respond to requirements of the Brazilian Environment Institute, the national environmental authority. Incompliance with these requisites could supposedly bring work on the dam to a halt. But the rules are subject to flexible interpretations, as recent experience has shown.

Pereira is one of the leaders of the PDRS, a “democratic and participative” programme where decisions on investments are reached by an administrative committee made up of 15 members of society and 15 representatives of the municipal, state and national governments.

The projects can be proposed by any local organisation that operates in the four areas covered by the plan: land tenure regularisation and environmental affairs, infrastructure, sustainable production, and social inclusion.

In these areas and some projects that the company finances, such as the Cacauway chocolate factory that processes the growing local production of cacao, the PDRS is distinct from the PBA, which addresses the immediate needs of people affected by the dam, such as indigenous people, fisherpersons or families displaced by the reservoirs.

The PBA’s activities were defined by the environmental impact study produced by researchers prior to the dam concession tender. Hospitals and clinics were built or refurbished to compensate the municipalities for the rise in demand for health services, while 4,100 housing units were built for relocated families.

These are responses to the immediate needs of affected individuals, groups or institutions, without integral or lasting planning. The only one responsible for implementation is the company holding the concession, even though they involve tasks that pertain to the public sector.

“The confusion between public and private is natural,” José Anchieta, the director of socioenvironmental affairs in Norte Energía, told IPS.

The delay in compensatory programmes generated chaos, the Altamira Defence Forum complains. Many of the initiatives were supposed to be carried out prior to construction of the hydropower plant.

The hospitals and health clinics were not delivered by Norte Energía until now, when construction of the dam is winding down. But they were most needed two years ago, when the floating migrant worker population in the region peaked as a result of work on the dam. The same is true for schools and urban development works.

This mistiming led to serious problems for the local indigenous population. The institutions protecting this segment of the population were not strengthened. On the contrary, the local presence of the National Indigenous Foundation (FUNAI), the government agency in charge of indigenous affairs, was weakened during the construction of the dam, and the overall absence of the state was accentuated.

From 2010 to 2012 an “emergency plan” distributed processed foods and other goods to indigenous villages. This led to an abrupt change in habits, driving up child malnutrition and infant mortality among indigenous communities, which only recently began to be provided with housing, schools and equipment and inputs to enable them to return to agricultural production. 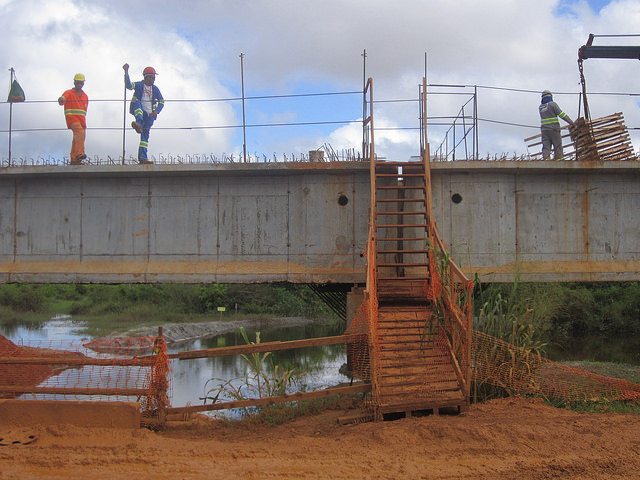 Bridge under construction on a road at the entrance to the city of Altamira, in Brazil’s Amazon region. The delay in building the bridge has hindered the reurbanisation of the low-lying parts of the city that will be partially flooded when the Belo Monte dam reservoir is filled. Credit: Mario Osava/IPS

The PBA and PDRS also have different timeframes. The former is to end before the reservoirs are filled, which is to be completed by the end of this year. The latter, meanwhile, involves a 20-year action plan.

The company’s social programmes are also “an important sphere of debate, definition of projects and redefinition of public policies, which should become permanent by being transformed into an institute or foundation,” said Pereira, defending “the adoption of their democratic administration by other development agencies.”

The question is of concern to Brazil’s National Economic and Social Development Bank (BNDES), which has financed 78 percent of the cost of the construction of Belo Monte.

Besides providing a team to accompany the PDRS, it promoted a study to organise its projects and ideas in an “initiatives file” and a Territorial Development Agenda (TDA) in the Xingú basin.

But this planning and promotion effort to bring about real development has come late, when it is difficult to neutralise the negative effects, which will stand in the way of the construction of new hydropower dams in the Amazon, even with the promise of a TDA.

Belo Monte has also highlighted the dilemmas and challenges of power generation, currently dramatised by severe drought in much of Brazil.

Belo Monte, which will be the second-largest hydropower plant in Brazil and the third-largest in the world, producing 11,233 MW, will aggravate the seasonal drop in hydropower in the second half of each year, once it becomes fully operational in 2019.

That is because the Xingú has the biggest seasonal variation in flow. From 19,816 cubic metres per second in April, the month with the strongest flow, it plummets to 1,065 cubic metres in September, the height of the dry season. This was the average between 1931 and 2003, according to the state-run Eletrobras, Latin America’s biggest power utility company.

There is probably no worse choice of river for building a run-of-the-river power station, whose reservoirs do not accumulate water for the dry months. Belo Monte will represent 12 percent of the country’s total hydropower generation, which means the effect of the plunge in electricity will be enormous, fuelling demand for energy from the dirtier and most costly thermal plants.

One alternative would have been a reservoir 2.5 times bigger, which would have flooded two indigenous territories – something that is banned by the constitution.

Another would have been the construction of four to six dams upstream, to regularise the water flow in the river, as projected by the original plan in the 1980s which was ruled out due to the outcry against it.