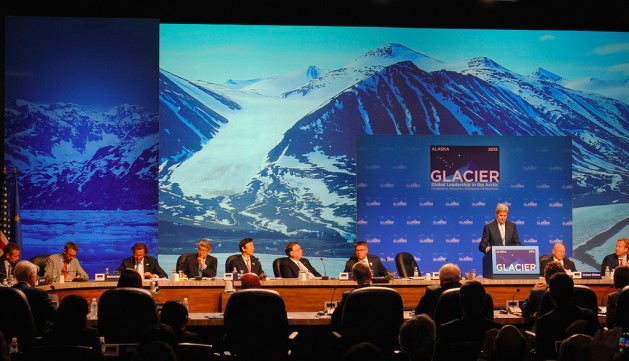 The one-day summit on ‘Global Leadership in the Arctic – Cooperation, Innovation, Engagement, and Resilience (GLACIER) held in Anchorage, Alaska on Aug. 31 failed to make commitments to serious action to fight the negative impacts of global warming. Credit: Leehi Yona/IPS

ANCHORAGE, Alaska, Sep 1 2015 (IPS) - After a one-day summit in the U.S. Arctic’s biggest city, leaders from the world’s northern countries acknowledged that climate change is seriously disrupting the Arctic ecosystem, yet left without committing themselves to serious action to fight the negative impacts of global warming.

The Aug. 31 summit on ‘Global Leadership in the Arctic – Cooperation, Innovation, Engagement, and Resilience (GLACIER)’, was organised by the U.S. State Department and attended by dignitaries from 20 countries, including the eight Arctic nations – Canada, Denmark, Finland, Iceland, Norway, Russia, Sweden and United States.

Political leaders like U.S. President Barack Obama, who urged Arctic nations to take bolder action as the summit ended, came out with strong words, but stakeholders from civil society and scientific groups said the outcome came short of the tangible action needed.

“This statement (from the one-day GLACIER Arctic summit] unfortunately fails to fully acknowledge one of the grave threats to the Arctic and to the planet – the extraction and burning of fossil fuels” – Ellie Johnston, World Climate Project Manager at Climate Interactive

The summit attracted the attention of environmental and indigenous groups, which criticised Obama’s reputation as a climate leader in the face of allowing offshore oil drilling in the Arctic.

All participating countries signed a joint statement on climate change and its impact on the Arctic, after the initial reluctance of Canada and Russia, which eventually added their names.

“We take seriously warnings by scientists: temperatures in the Arctic are increasing at more than twice the average global rate,” the statement read, before going on to describe the wide range of impacts felt by Arctic communities’ landscapes, culture and well-being.

“As change continues at an unprecedented rate in the Arctic – increasing the stresses on communities and ecosystems in already harsh environments – we are committed more than ever to protecting both terrestrial and marine areas in this unique region, and our shared planet, for generations to come.”

However, the statement lacked concrete commitments, even on crucial topics like fossil fuel exploration in the Arctic, leaving climate experts with the feeling that it could have been more ambitious or have offered more specific, tangible commitments on the part of countries.

“I appreciate the rhetoric and depth of acknowledgement of the climate crisis,” the World Climate Project Manager at Climate Interactive, Ellie Johnston, told IPS. “Yet this statement unfortunately fails to fully acknowledge one of the grave threats to the Arctic and to the planet – the extraction and burning of fossil fuels.”

“This is particularly relevant as nations and companies jockey for access to drilling in our historically icy Arctic seas which have now become more accessible because of warming,” she said. “Drilling for fossil fuels leads to more warming, which leads to more drilling. This is one feedback loop we can stop.”

Oil and gas companies were encouraged – but not required –to voluntarily take on more stringent policies and join the Climate and Clean Air Coalition’s Oil and Gas Methane Partnership, an initiative to help companies reduce their emissions of methane and other short-lived climate pollutants.

U.S. Secretary of State John Kerry addressed participants – members from indigenous communities, government representatives, scientists, and non-governmental organizations – at the opening of the summit. “The Arctic is in many ways a thermostat,” he said. “We already see [it] having a profound impact on the rest of the planet.”

Kerry also attempted to drum up action ahead of the COP21 United Nations climate change negotiations in Paris this December, urging governments to “try to come up with a truly ambitious and truly global climate agreement.”

He added that the Paris conference “is not the end of the road […] Our hope is that everyone can leave this conference today with a heightened sense of urgency and a better understanding of our collective responsibility to do everything we can to deal with the harmful impacts of climate change.”

In a closing address to summit participants, President Obama repeatedly said “we are not doing enough.” He outlined the stark impacts of a future with business-as-usual climate change: thawing permafrost, forest fires and dangerous feedback loops. “We will condemn our children to a planet beyond their capacity to repair … any leader willing to take a gamble on a future like that is not fit to lead,” he stated.

However, neither Kerry nor Obama acknowledged, as many environmental groups have pointed out, that the United States’ current greenhouse gas emissions reduction commitment falls nearly halfway short of what the country must do in order to stay within the Paris conference goal of a 2oC warming limit.

While participants emphasised engagement from affected communities, the summit itself did not manifest engagement with those communities: less than one-third of the panellists and presenters were either indigenous or female, and only one woman of colour was present.

“It would have been nice to hear more from indigenous women or women of colour,” Princess Daazrhaii, member of the Gwich’in Nation and strong advocate for the protection of the Arctic National Wildlife Refuge, told IPS. “The Arctic is more diverse than what I felt like was represented at the conference.”

“As life-givers and as mothers, many of us nurse our children. We know for a fact that women in the Arctic are more susceptible to the persistent organic pollutants (POPs) that are bound to the air we breathe. Violence against women is another issue that I feel gets exacerbated when there are threats to our ecosystem.”

All individuals talked to appreciated the conference’s emphasis on climate change as a significant problem, yet all of them also expressed a desire for the United States – and governments around the world – to do more.