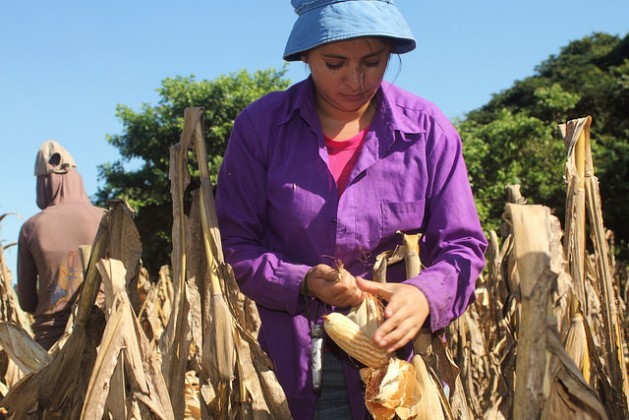 Domitila Reyes, 25, picks a cob of native corn in a field in the Mangrove Association, one of the two small farmer organisations that produce these seeds for the government’s Family Agriculture Plan in El Salvador. The seeds are not only high yield but are also more tolerant of the climate changes happening in this Central American country. Credit: Edgardo Ayala/IPS

JIQUILISCO /SAN MIGUEL, El Salvador , Nov 30 2015 (IPS) - Knife in hand, Domitila Reyes deftly cuts open the leaves covering the cob of corn, which she carefully removes from the plant – a process she carries out over and over all morning long, standing in the middle of a sea of corn, a staple in the diet of El Salvador.

Reyes is taking part in the “tapisca” – derived from “pixca” in the Nahat indigenous tongue, which means harvesting the field-dried corn.

The process will end, weeks later, with the selection of the best quality seeds, in order to ensure food sovereignty and security for poor peasant farmers in this Central American country of 6.3 million people.

Some 614,000 Salvadorans are farmers, and 244,000 of them grow corn or beans on small farms averaging 2.5 hectares in size, the Ministry of Agriculture and Stockbreeding reports.

In rural areas, 43 percent of households are poor, compared to 29.9 percent in urban areas, according to the latest annual survey by the Ministry of Economy.

“I see that the harvest is good, even though the rain was causing problems,” Reyes, 25, told IPS. She earns 10 dollars a day “tapiscando” or harvesting corn.

Climate change has modified the production cycles in this country, which is experiencing lengthy droughts in the May to October wet season and heavy rain in the November to April dry season. The erratic weather has ruined corn and bean crops.

“High quality seeds are strategic for the country, because they make it possible for farming families to grow their crops in periods of national and global crisis, given the problem of climate change.” -- Alan González

But Reyes, covered head to toe to protect herself from the sun in jeans, a long-sleeved blouse and a hat, is relieved that the high-quality or “improved” seeds have managed to resist the effects of the changing climate.

“This corn has withstood it better…the rain hurt it but not very much. Other seeds wouldn’t have survived the blow,” she told IPS in the middle of the cornfield.

Reyes is one of the nearly two dozen workers who, under the burning sun, are harvesting corn on this seven-hectare field, one of several that belong to the Mangrove Association in Ciudad Romero, a rural settlement in the municipality of Jiquilisco in the eastern department of Usulután.

The region is known as Bajo Lempa, named after the river that crosses El Salvador from the north, before running into the Pacific Ocean. In that region there are 86 communities, with a total population of 23,000 people.

Many of the inhabitants are former guerrilla fighters of the Farabundo Marti National Liberation Front (FMLN), which fought the country’s right-wing governments in the 1980-1992 armed conflict that left a death toll of around 75,000, mainly civilians.

The Mangrove Association is one of the two producers of open-pollinated (the opposite of hybrid) native seeds in El Salvador. The other is the Nancuchiname Cooperative, also in the Bajo Lempa region.

They sell their annual output of 500,000 kilos of seeds to the government for distribution to 400,000 small farmers, as part of the Family Agriculture Plan (PAF). Each farmer receives 10 kg of seeds of corn and beans, as well as fertiliser.

“One achievement by our organisation is that the government has accepted us as a supplier of native seeds to the PAF,” said Juan Luna, coordinator of the Mangrove Association’s Agriculture Programme. 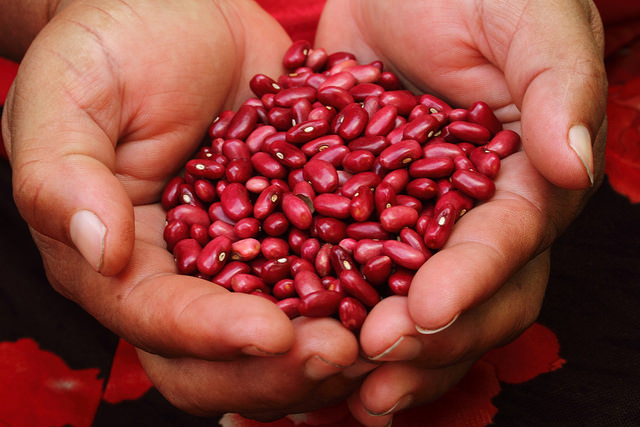 The hard-working hands of Ivania Siliézar, 55, pick improved beans she grew on her three-hectare farm on the slopes of the Chaparrastique volcano in the eastern Salvadoran department of San Miguel. Thanks to these native seeds, her output has doubled. Credit: Edgardo Ayala/IPS

Luna told IPS that with these seeds, Salvadoran small farmers are better prepared to confront the effects of climate change and ensure food security and sovereignty.

In this country, 12.4 percent of the population – around 700,000 people – are undernourished, according to the United Nations Food and Agriculture Organisation (FAO).

The Mangrove Association and another three cooperatives in the area produce 40 percent of the improved seeds purchased by the PAF, whether native or the H59 hybrid variety developed by the government’s Enrique Álvarez Córdova National Centre for Agricultural and Forest Technology (CENTA).

The rest are produced by cooperatives in other regions of the country. 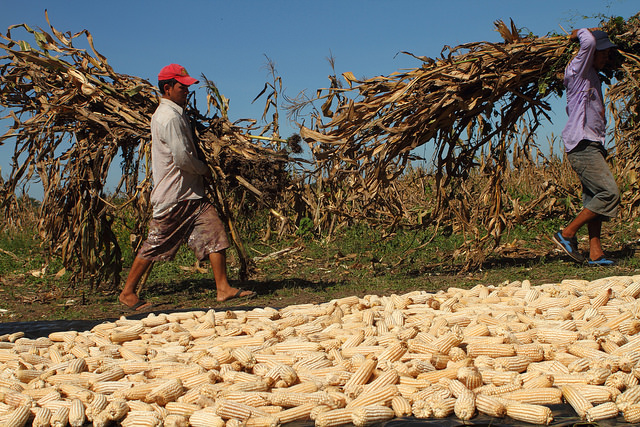 Two farmers carry dry leaves of corn, after the harvest of field-dried corn, on a parcel of land belonging to the Mangrove Association, one of the cooperatives that produce native corn seeds in El Salvador. Credit: Edgardo Ayala/IPS

He added that the effort to promote this kind of seeds as a tool to weather the effects of climate change and strengthen food security and sovereignty are part of the Hunger Free Mesoamerica programme launched by FAO in 2014 in Central America, Colombia and the Dominican Republic.

“High quality seeds are strategic for the country, because they make it possible for farming families to grow their crops in periods of national and global crisis, given the problem of climate change,” said González.

Up to 2009, PAF purchased seeds from only five companies. But that year the FMLN, which became a political party after the 1992 peace deal, was voted into office and modified the rules of the game in order for small farmers to participate in the business, through cooperatives.

“We produce more, and we earn a bit more income,” said Ivania Siliézar, 55, who produces an improved variety of bean in the village of El Amate in the department of San Miguel, 135 km east of San Salvador.

Siliézar told IPS that she took the time to count how many bean pods one single plant produces: “More than 35 pods; that’s why the yield is so high,” she said proudly.

The variety of bean grown by her and 40 other members of the Fuentes y Palmeras cooperative is called chaparrastique, and was also developed by the CENTA technicians. The name comes from the volcano at whose feet this and six other cooperatives grow the bean, which they sell in local markets, as well as to the PAF.

Siliézar grows her crops on her farm that is just over three hectares in size, and in the last harvest of the year, she picked 1,250 kg of beans, a very high yield.

Similar excellent results were obtained by all 255 members of the seven cooperatives, who founded a company, Productores y Comercializadores Agrícolas de Oriente SA (Procomao), and have managed to mechanise their production with the installation of a plant that has processing equipment such as driers.

The plant was built with an investment of 203,000 dollars, financed by Spanish development aid and support from FAO, the International Fund for Agricultural Development (IFAD), the San Miguel city government, and the Ministry of Agriculture and Stockbreeding. It has the capacity to process three tons of beans per hour.

Cooperatives grouping another 700 families from the departments of San Miguel and Usulután also set up three similar companies.

“We have had pests, but thanks to God and the quality of the seeds, here is our harvest,” Siliézar said happily.