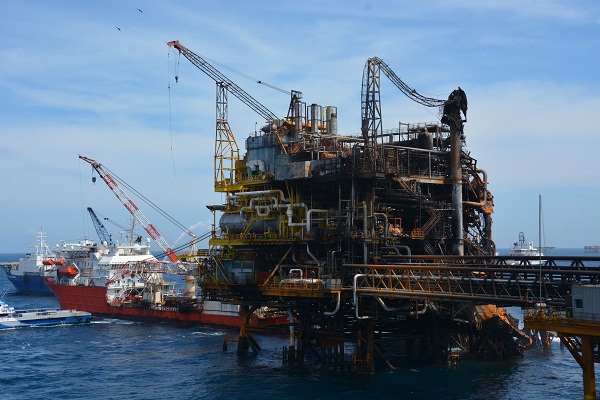 The oil industry contracts granted by the Mexican government since 2014 have not included the social impact assessments required by law. The photo shows the Abkatun-A Permanente shallow-water platform in the Campeche Sound, where a fire broke out on Apr. 1, 2015 off the coast of the state of Campeche in southeastern Mexico. Credit: Courtesy of PEMEX

MEXICO CITY, Dec 23 2015 (IPS) - Mexico’s hydrocarbons law stipulates that oil contracts must include a social impact assessment. But this has not been done in the case of the oilfields granted to the country’s former oil monopoly, Pemex, or to private companies since the industry was opened up to private investment.

Civil society organisations argue that concessions that do include a social impact asessment are illegal.

“The authorities have the obligation to carry out the consultations,” Manuel Llano, the founder of Cartocrítica, a Mexican NGO, told IPS. “One interesting detail is that the law says the evaluation must be conducted prior to the public tenders.”

Article 120 of the hydrocarbons law in effect since August 2014 states that the energy ministry must organise consultations to obtain free, prior and informed consent from indigenous communities that will be affected by oil industry projects in their territories.

And article 121 establishes that those interested in obtaining a permit for oil industry activity must present a social impact assessment (SIA) to the energy ministry. The energy reform opened up oil exploration, extraction, refining, transportation, distribution and sale of oil and its by-products to local and foreign private investment.

“With respect to the shallow water projects, the government argues that there is no social impact, which is why the SIAs weren’t conducted. But one of the long-time conflicts is with fisherpersons because of the damage they suffer due to oil industry activity.” -- Aroa de la Fuente

After Pemex’s monopoly was broken up by the new law in August 2014, the state oil company was allowed to keep 83 percent of the country’s probable reserves and 21 percent of the prospective reserves, equivalent to 20 billion barrels of crude. This selection process was known as Round Zero.

On Jul. 15, the Mexican government opened up Round One and assigned two contracts for the exploration and drilling of deep sea oilwells off the coast of the southeastern states of Campeche, Tabasco and Veracruz. The contracts were signed on Sept. 4.

On Sept. 30, the energy ministry assigned three more contracts, and on Dec. 15 the third public tender was held.

“They haven’t done the assessments,” Aroa de la Fuente, a researcher with the FUNDAR Centre for Research and Analysis, told IPS. “With respect to the shallow water projects, the government argues that there is no social impact, which is why the SIAs weren’t conducted. But one of the long-time conflicts is with fisherpersons because of the damage they suffer due to oil industry activity.”

She questioned the argument that there are no social impacts, if no studies have been carried out to demonstrate this.

Since March, the guidelines for the SIAs have been open to public consultation in the Federal Regulatory Improvement Commission (COFEMER).

According to the “general administrative guidelines on social impact assessments in the energy sector”, drawn up by the energy ministry, the evaluations must assess the likely social impacts from oil industry activity and outline the social impact plans and measures to mitigate potentially adverse effects.

The guidelines require a baseline, representing a starting point for companies to compare actual with projected impacts. The baseline should be established before any oil industry activity begins. It should provide statistics in the following areas: demographic, migration, households and families, education, health services, jobs and labour conditions, social security, housing, main economic activities, local public finances, and tangible and intangible cultural heritage.

The company must also include the results from the analysis of stakeholders – individuals, communities, groups, organisations and institutions – taking into consideration their rights, interests and expectations, as well as their levels of involvement, importance and influence regarding the project.

The comments about the SIA process reflect the resistance of companies, especially in the storage and distribution sectors, to conduct them.

The energy ministry estimates 176 million dollars in losses from the cancellation of projects due to the lack of SIAs.

The government argues that the first two public tenders did not require SIAs because they involved shallow water drilling. But the law does not make any such distinction.

Llano said SIAs are important for the defence of territory and for those who wish to legally challenge the areas that have been granted in concession.

The position taken by the government “is serious, because many of the wells are on land,” he said. “They are not complying with the law. They say the first two tenders are in offshore areas, which means no assessment is needed, but there is no legal foundation for this argument. What about the issues of the environment and fisherpersons?”

The expert complained that the government assumes that there are no affected groups, “when it is the assessment that must determine this.”

The government has already suffered its first setbacks. On Dec. 11, a federal judge ordered the permanent suspension of the construction of a wind park in the municipality of Juchitán, in the southern state of Oaxaca, after accepting a legal plea for protection filed by Binnizá indigenous communities.

Native groups and NGOs have fought the Energía Eólica del Sur wind park project by the company of the same name, which would generate 396 MW to be fed into power grids in the region. Their argument is that no free, prior and informed consent was sought.

The SIAs can be a useful tool for local populations. “In the public tenders for oil wells on land, the situation will become more complex, because people are going to try to defend themselves, and this is a mechanism that allows them to do so,” said de la Fuente.