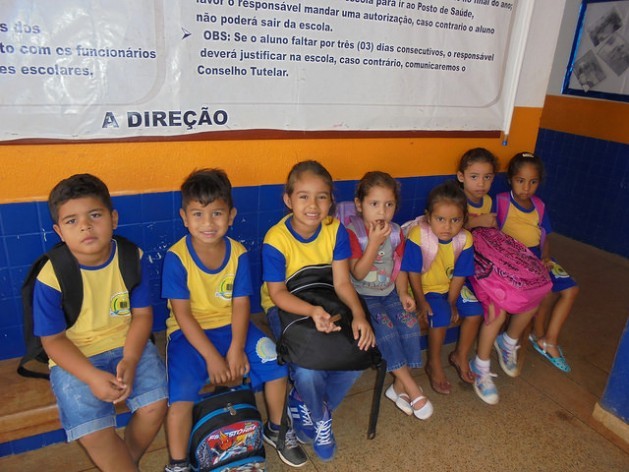 Students from the school in Vila Nova Teotônio, that now has half the students it used to have, wait for the bus that takes them to their nearby homes, or – in the case of those who live on the other side of the Madeira River – for the boat that crosses the Santo Antônio dam in the municipality of Porto Velho, in northwestern Brazil. Credit: Mario Osava/IPS

PORTO VELHO, Brazil, Oct 10 2016 (IPS) - The construction of mega-hydropower plants in Brazil has been a tragedy for thousands of families that have been displaced, and a nightmare for the companies that have to relocate them as required by local law.

But the phenomenon is not exclusive to this country. According to a 2005 study by Thayer Scudder, who teaches anthropology at the California Institute of Technology (Caltech), of 44 dams worldwide whose outcomes were assessed by the report, a majority of the resettled population was further impoverished in 36 of the cases.

In fact, just three of the plants helped to improve people’s lives. In the other five cases, people managed to maintain their previous standard of living.

Of the 50 power plants that were studied, 19 were in Asia, 10 in Latin America, and the rest in other regions. (In six cases, insufficient data was available to evaluate outcomes.)

Two giant hydroelectric power plants recently built on the Madeira River where it crosses the city of Porto Velho in the’ Amazon rainforest in northwest Brazil are adding to the negative data, in spite of the efforts made, investing millions in resettling people.

Six years after their displacement due to the construction of the Jirau and Santo Antônio plants, the third and fourth largest dams in the country, respectively, the resettled families still depend on support from the companies that built the dams, and a small portion have given up their new homes.

The school in Vila Nova Teotônio has only half of the nearly 300 students that it had in its previous site, and the number “is going down every year,” despite the more modern and spacious facilities, Vice Principal Aparecida Veiga told IPS.

The population of the fishing village that emerged seven decades ago next to the Teotônio waterfall dwindled together with the student body, after the families were resettled to a higher spot safe from the flooding from the Santo Antônio dam, built from 2008 to 2012, six kilometres from the city of Porto Velho, the capital of the municipality and of the state of Rondônia.

“We have classrooms with five students in the morning, in contrast with the up to 42 students we used to have in the old school, with teachers that are needed in other schools being underutilised,” said Veiga.

“Down below,” as they refer to the submerged village, “the community was very connected with the school, which strengthened education. Here, we are having problems with drugs, pregnant girls. They were removed from their roots, their culture,” she said. 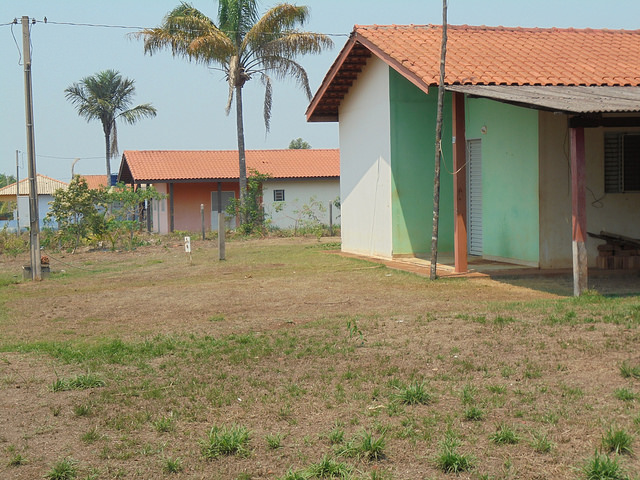 Empty houses in Vila Nova Teotônio, where 47 families remain, according to the company that built the Santo Antônio hydropower plant, which also constructed a community of 72 houses, 17 of which were transferred to the settlers’ associations for the school, health centres and other services. Some of the families that were resettled in this town in the northwestern Brazilian state of Rondônia have already left. Credit: Mario Osava/IPS

One loss was the waterfall, which was submerged by the dam.

With the perspective of a businessman, Carlos Alfonso Damasceno, a 48-year-old father of six, says “it is not a question of whether or not people like the new village; it’s about a lack of income sources.”

“There are no fish, the river has dried and silted up…Also, the road was extended 11 km, having been rebuilt to go around a jutting out part of the reservoir, and that keeps tourists away.”

With fish scarce and access more difficult, besides the mosquitoes that proliferate in the stagnant water, Teotônio no longer attracts the visitors that used to come to enjoy the local food, beaches and waterfall, said Damasceno, who owns the village’s largest store and restaurant.

He believes that rebuilding the old road, by filling in with earth the submerged section, would be enough to overcome the local economic decline, returning to an acceptable distance of 30 km between the village and Porto Velho, a market of 510,000 people.

Only 48 families from the original village of Teotônio accepted resettlement on the new site, and “just 18 families remain, but some of them were not among the initial families,” said Damasceno.

But the Santo Antônio Energía Consortium (SAE), which built the plant and holds a concession to operate it for 35 years, provides different statistics. There are 47 families now living in Vila Nova Teotônio, the company informed IPS, and of the 72 houses that were built, 17 were transferred to the Settlers’ Association and other institutions. 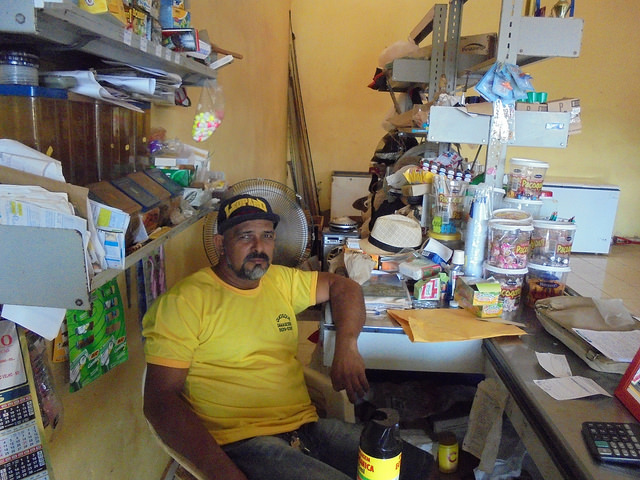 Carlos Damasceno in his store, which provides gas, food and other goods to the people of Vila Nova Teotônio. The town was built with 72 houses to resettle the villagers who lived along the Madeira River, in communities that were flooded by the Santo Antônio hydropower plant reservoir, in the northwest of Brazil. Credit: Mario Osava/IPS

“Less than five families sold their homes,” said the consortium, which describes the village as a “model case”, with a tourism potential which is reflected in the events held there, and facilities built by SAE, such as an artificial beach, a wooden pier, an eco-trail, and lodging houses.

Fish farming of the tambaqui (Piaractus macropomus) – also known as black pacu, black-finned pacu, giant pacu, or cachama – the most profitable Amazon fish for breeding, has not yet taken off because the group of settlers chosen for the activity has rejected the offered project, with training, materials, tanks and necessary vehicles, said SAE.

Each family in Teotônio is still receiving a monthly allowance of 1,250 Brazilian reals (380 dollars) from the company, set by the environmental agencies, since the families are not yet able to support themselves, after six years in their new concrete homes built on 2,000-square-metre lots and equipped with sewage, running water and other basic services.

Similar difficulties in adaptation in have been experienced in the other six resettled villages built by SAE and the two by Sustainable Energy of Brazil (ESBR), which constructed and operates the Jirau hydropower plant, 120 km from Porto Velho. 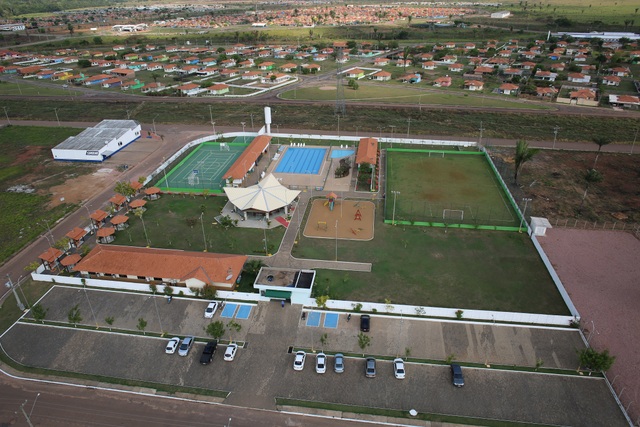 View of Nova Mutum Paraná, a development of 1,600 houses built in a deforested area far from the Madeira River, where people displaced by the Jirau hydropower plant have been resettled. The settlement has brought culture shock to the riverine population that is deeply connected with the river and the forest. Credit: Courtesy of ESBR

In the New Life Rural Resettlement built by ESBR, only 22 of the initial 35 families remain. Late this year they are to start breeding tambaqui in tanks dug below ground, whose wastewater will be used to fertilise vegetable gardens and fruit orchards, following the pilot project carried out for the last six years.

ESBR has also resettled some of the people displaced by the dam in Nova Mutum, an urban development of 1,600 houses built mainly to accommodate its employees.

In this landscape of tree-less grasslands and cattle pasture, the company tried to resettle hundreds of families from the old Mutum Paraná, a village of riverine people in close connection with the forest, which was flooded by the Jirau dam.

Far from the river and its fish, the forest and its fruit, with concrete homes instead of their wooden houses, and a pool instead of their traditional river beach, the resettled people suffered from culture shock and found it hard to adapt.

Some of the families left, trying to reconstruct on their own their previous way of life, in Vila Jirau, a small riverside community.

But Nova Mutum is one of the few success stories among forced resettlements, according to Berenice Simão, co-author of the paper “Socioecological Resilience in Communities Displaced by Hydroelectric Plants in the Amazon Region“, together with ecologist Simone Athayde, from the University of Florida, United States.

The small community of resettled people is “organised, and has very active associations of local residents and women,” which are persistent in their negotiations, fighting and not giving up on their demands,” Simão told IPS.

The presence of a large number of shopkeepers and civil servants among the resettled people contributes to its success. Moreover, Nova Mutum is the ESBR’s showcase, and the company seems intent on investing whatever is necessary to develop the community, she said.

The company created the Environmental Observatory of Jirau, a social organisation with community participation that promotes environmental education, through gardens and reforestation, and cooperativism among farmers.

A furniture factory is being set up in the town, in a warehouse that has been empty since the dam was finished. “This could be the start of an industrial hub” – which was included in ESBR’s plans but never emerged – generating jobs and boosting the development of the community, said Simão.