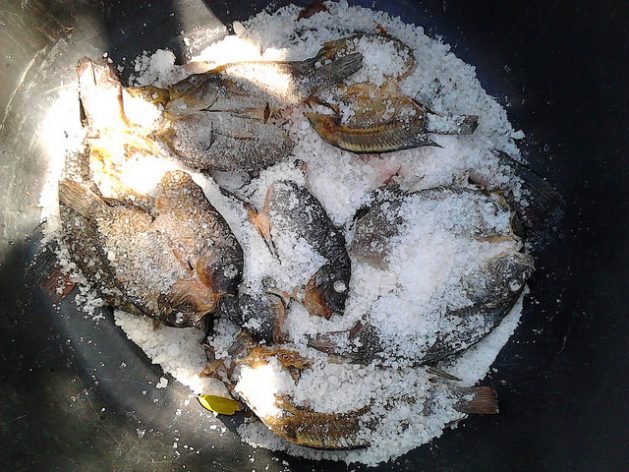 MONGU, Zambia, Sep 12 2017 (IPS) - Fishing is the capture of aquatic organisms in marine, coastal and inland areas. According to the Food and Agriculture Organisation of the United Nations (FAO), marine and inland fisheries, together with aquaculture, provide food, nutrition and a source of income to 820 million people around the world, from harvesting, processing, marketing and distribution. For many, it also forms part of their traditional cultural identity.

This is the case for the people of western Zambia, where fishing is not only a major source of income, but also a way of life. However, as FAO highlights in routine studies on the sector globally, illegal, unreported and unregulated fishing remain major threats to the sustainability of the fishery industry in this part of Zambia as well.

“Men’s attitudes have changed. Most of those we work with now treat us as equal partners." --Joyce Nag’umbili, a long-time fish trader in Senanga district

Here, poor post-harvest handling was identified as a major reason not only for illegal fishing but also over-fishing.

“The majority of people lack knowledge. They believe over-fishing is the best way to make up for the losses that they incur along the value chain,” laments Hadon Sichali, a fish trader in Mongu. “It is a chain, the trader believes breakages during transportation should be recovered by buying more fish at lower prices, forcing fishermen to overfish or even disregard the law to catch more.”

By disregarding the law, Sichali refers to a statutory annual fish ban which runs between December and March to allow fish breeding, but has over the years been a source of conflict between local fishers and government authorities. And the problem has been getting worse in recent years due to reduced catches of fish—an issue attributed to climate change.

But thanks to a Participatory Research project undertaken recently, some of these dynamics are changing, especially pertaining to women, who according to FAO, account for at least 19 percent of people directly engaged in the fisheries primary sector, and a higher percentage in the secondary sector such as processing.

According to the final technical report of the project implemented in Zambia and Malawi, Women who participated in the drama skits, a gender transformative tool, increased their involvement in fishing from 5 percent at the start of the project to 75 percent today.

“I would like to encourage the fisheries actors to utilize these methods since the improved technologies have shown that the losses can be reduced significantly and that the fish processed from these technologies have higher average value than the fish processed from the traditional methods,” said Western Province Permanent Secretary, Mwangala Liomba, during the project’s final results dissemination meeting in June.

“This allows for the fishers, processors and traders to have more money. The interventions require shorter time thereby increasing the time available to women processors…Furthermore the use of drama skits that challenge gender norms have enabled women processors in the floodplain to adopt and equitably benefit from improved processing technologies that reduce fish losses.”

Jointly funded by International Development Research Centre (IDRC)  and the Australian Centre for International Agriculture Research (ACIAR), the three year project, led by scientists from the Ministry of Fisheries and Livestock, the University of Zambia and WorldFish as a partner organization, the project aimed at improving effectiveness, re­duce losses, and promote greater equity in the fish value chain.

“In Zambia, the study found that physical fish losses occur at all the three nodes in the value chain and differ significantly between nodes,” says Alexander Shula Kefi, one of the lead researchers in the Project.

According to Kefi, on average, the processors lose the largest volume of fish (7.42 percent) followed by the fish traders (2.9 percent).  The fishers experience the least physical losses at 2 percent although, he says, this is not significantly different from the fish lost at trading node.  The major cause of physical loss was found to be breakages at processing and trading nodes.

Interestingly, “Women processors lost over three times the weight of their fish consignments than men processors, indicating that it is not only the function of processing that leads to losses but that gendered differences exist within the nodes too,” adds Kefi.

In tackling this aspect, the project employed a gender transformative tool using drama skits during implementation, and this led to a 35.7 percent increase in gender attitude scores among men.

And 36-year-old Joyce Nag’umbili, a long-time fish trader in Senanga district, testifies to this improvement. “Men’s attitudes have changed. Most of those we work with now treat us as equal partners,” she says. “Some men have put aside their egos and ask us on certain technologies which they don’t understand better.”

Caring for her two biological children and eight orphans has not been an easy task for Nag’umbili, and she says the CultiAF project offered a lifeline for her hand-to-mouth business, as the introduction of improved post-harvest handling technologies meant reduced losses and increased profit margins.

“At the time the project was introduced, my capital base was just about K 200 (22 dollars), but I now run an over K 8000 (888-dollar) business portfolio. In the last two years, I have managed to buy two plots of land and building materials worth over K 5000 (555 dollars),” she said happily.

Her excitement confirms the project’s findings, whose results show that the improved processing technologies reduce fish losses significantly and consequently improve the income of fisher folk.

According to the findings, cumulatively, the physical losses decline from 38 percent to 19.3 percent by applying the new piloted technologies of improved smoking kilns, salting, use of ice and solar tent drying.  Along the value chain, processors increased their GM from 4.7 percent to 25.26 percent while traders increased to 25.3 percent from 22.8 percent.

On the nutrition component, “Smoked fish using the improved kiln technology had significantly higher protein contents than fish smoked using the traditional method,” says Dr. Nyambe Lisulo Mkandawire of the Department of Food Science and Nutrition at the University of Zambia (UNZA).

To help meet the global agenda of eradicating hunger, food insecurity and malnutrition, and ultimately eliminating poverty, a secondary project was developed.

Dubbed Expanding Business Opportunities for African Youth in Agricultural Value Chains in Southern Africa, the Project aimed at developing tools and support mechanisms for the realization of agri-business opportunities in the fish and maize post-harvest value chains in Malawi, Zambia and Zimbabwe, to serve as vehicles for commercialisation of research outputs.

According to Dr. Jonathan Tambatamba of AEH, the electronic platform has two parts—a mobile application where the fish sellers and buyers (fish traders, fishermen, fish processors, marketeers etc) register and find a market.

“Once they are registered, the seller can announce that they are selling fish i.e. type, form, smoked, fresh or salted; quantity, location, and price, while the buyers can also announce what they need,” explains Tambatamba. “This is an SMS system for now due to the fact that most of the target users just have basic phones.”

The second component, he says, is for mentors and mentees. Under this component, eight businesses have been provided with capacity building support such as training, but the businesses are also being mentored by assigned mentors. There are six mentors who provide advice on business management through the mobile platform.

Joyce Nang’umbili says that apart from benefiting from improved processing technologies, the Wayama Fisheries cooperative she belongs to emerged as a runner-up in the business proposals competition by AEH.

“We have been awarded 4,000 dollars,” she says. “Our plan is to construct solar tent driers which will be put on rent to the fisher folk, thereby generating us income as a cooperative.”