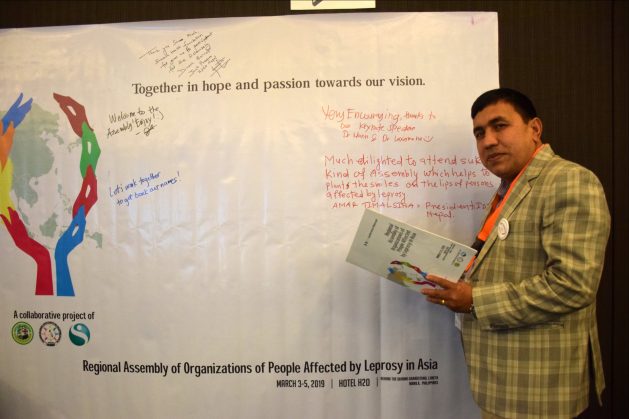 MANILA, Mar 3 2019 (IPS) - Growing up in Kathmandu, Nepal, Amar Bahadur Timalsina wasn’t allowed to attend school as a young boy because he was affected by leprosy. But decades later, after treatment and being able to re-integrate into his community, the boy who was once denied an education is now inspiringly the principal of a school of 400 students.

“I suffered from leprosy when I was 12 years old. At that time I was forced to leave my village and my community,” Timalsina told IPS.

But after that Leprosy Mission Nepal supported me with a recommendation letter, he was subsequently able to attend an orphanage “where I got an opportunity to continue my studies.”

“At my school there are 400 students and 30 staff. Now if I go to my village, there is no discrimination, no stigma and everyone welcomes me like any other person,” he said.

Timalsina, who is president from the International Association for the Integration, Dignity and Economic Advancement (IDEA), Nepal, a group founded by people with leprosy to support others with the disease, is in agreement that there needs to be greater inclusion for those affected by it.

Participants at the Regional Assembly of Organisations of People Affected by Leprosy in Asia kicked off today, Mar. 3 in Manila, Philippines, made a vocal appeal to adopt and embrace greater social inclusion and build a stigma-free society for those affected by leprosy

The three-day regional event, which is the first of its kind to be held, was organised by the Philippine government-run Culion Sanitarium and General Hospital (CSGH), the Coalition of Leprosy Advocate of the Philippines, and the Nippon Foundation (TNF) and its sister organisation, the Sasakawa Memorial Health Foundation (SMHF). Since the late 1960s TNF has been actively supporting the fight to eradicate leprosy worldwide including providing free multidrug therapy through the World Health Organisation. 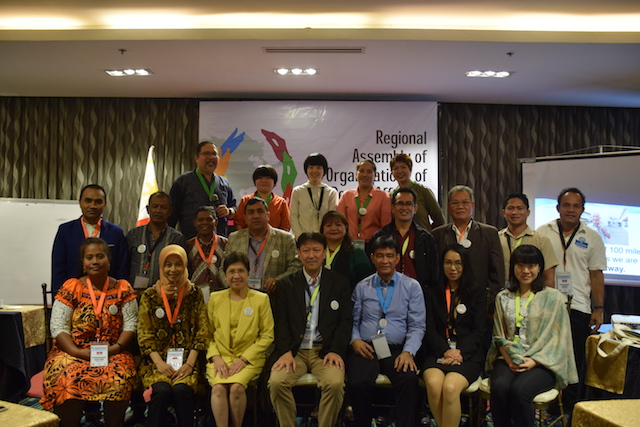 Participants at the Regional Assembly of Organisations of People Affected by Leprosy in Asia kicked off today, Mar. 3 in Manila, Philippines, made a vocal appeal to adopt and embrace greater social inclusion and build a stigma-free society for those affected by leprosy. Credit: Stella Paul/IPS

“The biggest challenge before us today is stigma,” said Dr. Maria Francia Laxamana, Assistant Secretary in the Philippines Department of of Health and one of the key speakers at the conference.

According to Laxamana, only one in every four in the Philippines seek out medical treatment for the disease and social stigma is one of the main reasons why they hide their condition. So, for the Philippines to achieve the global target of reducing leprosy cases by 2020, it would be crucial to have policies that could look at the disease in the local context and can provide solutions that are locally applicable.

For example, we should not be looking at leprosy just as a disease, but take a holistic approach and provide the affected people with a package of support that includes not only drugs, but also education, vocational skill trainings and employment. Such a package will not only help improve their quality of life, but also pave the way for greater social inclusion, resulting in removal of social stigma, she said.

“Integration is very important and we as a foundation, hope, we can contribute to the integration [of people affected by leprosy] with the society,” said Dr. Takahiro Nanri, Executive Director of SMHF and the second key speaker of the day. Reiterating the dedicated and continuous support of the foundation to eradication of leprosy, Nanri informed that SMHF has been organising regional assemblies across the world, including Africa, Latin America and the current one in Asia, to facilitate greater engagement and participation of all experts and leaders working on the disease.

Alice Cruz, United Nations Special Rapporteur on the elimination of discrimination against persons affected by leprosy and their family members, pointed out that social exclusion and stigma was having a devastating effect particularly on the children of those affected by Hansen’s disease. Addressing the assembly virtually, Cruz emphasised the need for sensitisation of school teachers because in many countries children with leprosy were expelled from schools by  the teachers themselves.

“Teachers in endemic ares should be trained on leprosy ad the schools should be one of the first places to raise awareness on leprosy’s signs and symptoms, but also on the human dignity and rights of the persons affected,” she said.

Dr Arturo Cunanan, chief of CSGH, said that while those working in the field always talk about the social stigma and discrimination that people with leprosy face, the question is how to measure this. “Usually, government will not address issues of human rights, not unless they know about the issue of burden.”

There are representatives from six nations in the region attending  the assembly: Philippines, Japan, Indonesia, China, Nepal and Kiribati. While some are working with the government at the policy level, others are working directly with the affected communities and are expected to  share their respective experiences and impacts to find a common, collective way to fight leprosy more effectively in the future.