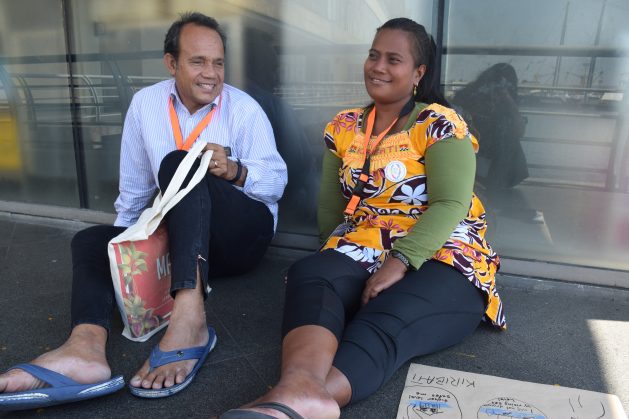 Itinnenga Uan—country head of Pacific Leprosy Foundation in Kiribati (left) and Kurarenga Kaitire, travelled for almost 24 hours  to reach Manila, the capital of the Philippines, to attend the Regional Assembly of Organisations of People Affected by Leprosy in Asia. Credit: Stella Paul/IPS

MANILA, Mar 4 2019 (IPS) - Kurarenga Kaitire lives in Kiribati—one of the world’s most climate-vulnerable nations. Already vulnerable to nature, the 29-year-old mother of five has faced a series of vulnerabilities over the past decade, including facing social stigma and domestic abuse.

The reason: she has leprosy—a disease still dreaded by many in the world.

Currently in Manila to attend  the ongoing 3-day Regional Assembly of Organisations of People Affected by Leprosy in Asia, Kaitire tells her story of personal loss and triumph with IPS.

A 2010 medical test confirmed that Kaitire had leprosy, news she quickly shared with her husband of two years. What happened next was unexpected.

“He went cold. He stopped coming near me or our child. From next day he would not come home in time. He would not touch me and when I questioned him on why he was behaving like that, he beat me up and cut off my hair,” she tells IPS.

When she could not take the beatings any longer, Katire threw her husband out of the house. He then stripped the home of its roofing, making the house uninhabitable.

It was around this time that she was introduced to Itinnenga Uan—country head of Pacific Leprosy Foundation in Kiribati. The foundation runs a welfare programme for leprosy affected people and Kaitire’s conditions qualified her for it.

“She was single [divorced], she had physical deformity and she faced discrimination too. So we helped her [boost her income to rebuild] the house. She is very hard working and had tried many things to have an income, but now she sells vegetables and potable plants. Now she has a better way to support herself and her children,” Uan tells IPS.

Kiribati has only 118,000 people. But for such a small population, the number of people affected with leprosy is quite large as each year over 200 new cases are reported. The low-lying and sinking Pacifci island nation has the highest percentage of people affected by leprosy compared to the total population.

And despite being a tiny country, the level of discrimination and stigma is just as high as everywhere else in the world, Uan reveals. 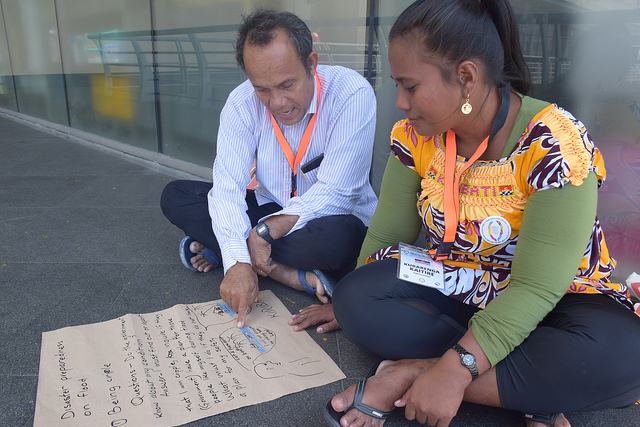 Itinnenga Uan—country head of Pacific Leprosy Foundation in Kiribati (left) and Kurarenga Kaitire, a leprosy survivor, talk about how their home nation of Kiribati is vulnerable to climate change. Credit: Stella Paul/IPS

For a country which is considered lost to rising sea levels, this stigma is an added burden and one that is difficult to cope with. The government of Kiribati, which heavily relies on international aid for running welfare programmes, has just started to provide financial support to the people affected by leprosy. This is aside from providing free basic medication.

But to access the support packages, one must first be graded by the government. Grading is a clinical system of classifying stages of the disease for treatment purposes. According the the World Health Organisation (WHO), Grade 0 means no impairment, with Grade 2 meaning visible impairment. Scores are added also by combining indicators on six body sites and a final grades range from 0 to 12.

Those with the highest grade receive 50 Australian dollars a month.

However, the government has made significant progress in creating public awareness.

“People are highly aware of leprosy because there are regular programmes on public radio which give a lot of information. In fact Kurarnega Kaitire went to a doctor for a medical check up only after she had listened to a  radio programme on leprosy,” Unan says.

But there is still a lot left to be done.

Programmes and policies that can address the vulnerabilities of leprosy affected people who are also climate vulnerable is one of them.

For example, many of the people in Kiribati are severely crippled by leprosy. Many others are living with physical disabilities, which include loss of eye sight. There is still no climate policy that particularly designed for these people with special need.

“Because of the sea level rise, we are sinking. There is constant heavy rain, wind and flooding. So our government recently has announced that we all can elevate our houses to a higher level. If I want, I can build 4-5 stories on my house. But those who are immobile (with leprosy), how will they climb to such heights? What is the alternative for them?” Uan asks.

Kaitire who travelled for almost 24 hours  to reach Manila, the capital of the Philippines, admits that she is experiencing stiffness in her legs already. She also has just spoken to her daughter in Kiribati over the phone and learnt that its raining heavily there. The thought of another 24-hour journey and multiple flights and walking in the middle of a flood is intimidating for her. “I will come to your home,” she tells Uan, trying to humour herself. Uan’s home is closer to the country’s airport and not affected by the flooding.

There is no magic wand that either Uan or Kaitire know of. However, they are in Manila with the belief that there will be new ideas and connections that they can make to help themselves in the future. The Sasakawa Memorial  Health Foundation/the Nippon Foundation (TNF) which supports leprosy projects across the world, is yet to work in Kiribati. If they enter the country and partner with the government, there can be better support for the leprosy affected people, Uan hopes. TNF has been supporting leprosy eradication across the globe since the late 1960s, even supplying free multidrug therapy through the WHO.

Kaitire, on the other hand, is more focused on helping her children obtain an education and making herself strong enough to deal with all the challenges she may still face—be it social, physical or financial.

Recently, her ex-husband returned to her, asking for forgiveness but she didn’t take him back. “I need medication, financial stability and above all, dignity. I don’t want a man who can’t give me that.”