As small scale farmers step up growing more horticulture produce, there are concerns that demand will outstrip supply as these farmers lack the sophisticated and well-financed production lines of commercial farmers. 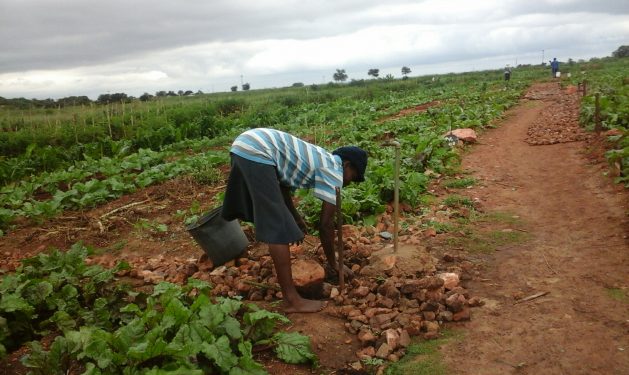 A woman works on a community vegetable garden in Bulawayo. For a while now, small-scale farmers and other community gardeners scattered across Bulawayo have concentrated on producing on-demand horticultural products such as tomatoes, cabbages and onions. Credit: Ignatius Banda/IPS

BULAWAYO, Zimbabwe, May 12 2020 (IPS) - Bulawayo, Zimbabwe’ second city of some 700,000 people, has experienced a shortage of vegetables this year, with major producers citing a range of challenges from poor rains to the inability to access to bank loans to finance their operations. But this shortage has created a market gap that Zimbabwe smallholders — some 1.5 million people according to government figures — have an opportunity to fill.

“Smallholder farmers are the highest producers of diverse food crops, some estimate that they supply over 80 percent of what many of us [in the whole country] are even currently consuming,” Nelson Mudzingwa, the National Coordinator of the Zimbabwe Small Holder Organic Farmers Forum (ZIMSOFF), the local chapter of the Eastern and Southern Africa Small Scale Farmers Forum (ESAFF), told IPS.

Smallholder farmers have long been feeding this Southern African nation by producing the bulk of the country’s maize staple, according to the Ministry of Agriculture.

Zimbabwe’s controversial land reform programme — where late former President Robert Mugabe’s government urged black Zimbabweans to take ownership of white-owned farms in 2000 — is generally considered a failure that resulted in the country, which was once considered the breadbasket of Africa, becoming a net food importer.

But for a while now, small-scale farmers and other community gardeners scattered across Bulawayo have concentrated on producing on-demand horticultural products such as tomatoes, cabbages and onions. This shift in the food production matrix has only increased since the country announced the COVID-19 lockdown on Mar. 31, which is meant to end this Sunday.

According to the Famine Early Warning System (FEWS NET), Zimbabwe’s lockdown has crippled the movement of agro-products, further increasing shortages from larger farms across the country.

“Smallholder farmers have continued to supply the urban markets that are open daily, which is a clear testimony of what smallholder farmers are able to produce despite very limited support,” Mudzingwa told IPS.

From the backyard the supplies Bulawayo vegetable market…

From a small plot at her home in Bulawayo’s medium-density suburb of Kingsdale, Geraldine Mushore grows all sorts of greens: from peas to tomatoes to onions and lettuce. This has become her hustle, she said, at a time many Zimbabweans are seeking ways to escape grinding poverty.

Mushore set up her thriving 900-square-metre green garden less than two years ago but wishes she had started it sooner.

“It started as a small experiment to see what I could grow, if I was up to it. But now it is my full-time occupation,” she told IPS.

Mushore sells her produce in bulk to vendors in Bulawayo’s bustling downtown vegetable market and also to local supermarkets.

“The business just grew itself, I suppose. The borehole has been a boon especially now when larger farms are failing to meet the demand for greens as many rely on rainfall or have boreholes that are no longer pumping any water,” Mushore told IPS. She added that while she had been doing well previoulsy, since the lockdown her business has been thriving.

…to the reclaimed plot that’s thriving

In Ntabazinduna, a hamlet 30 km from Bulawayo, Joseph Ntuli has a thriving vegetable garden on some 2,000 square metres of his 18-acre plot.

While the plot is dominated in large part by thorny bushes, Ntuli has cleared the portion of land to grow cabbages, tomatoes, peas and carrots.

Demand for fresh produce has grown this year on the back of economic hardships that has seen families abandoning preferred protein-rich diets such as meat, fish and chicken in favour of vegetables that cost less.

“We used to be overshadowed by bigger farms who produced much of the vegetables in this part of the country but we see now they are struggling which has put even more pressure on us to supply vegetable markets and feed our people,” Ntuli told IPS.

He said that while previously he would sometimes have to watch his produce rot because he had no customers, now he sells at least 20 crates of tomatoes a day, and has since had to hire extra help.

“I am supplying the Bulawayo market and people there say other vegetables are actually coming other parts of the country far away because there is a shortage from our own local producers,” he said.

As smallholders farmers across the country start growing more produce, there are concerns that demand will outstrip supply as these farmers lack the sophisticated and well-financed production lines of commercial farmers.

“Smallholder farmers have been up to the task to feed the country although they have fallen short in terms of meeting demand.

“The demand, especially for the upper end of the market such as supermarkets, [and before the lockdown] hotels and restaurants, has largely been met by imports of horticultural produce. The smallholder farmers on the other hand, have largely met the demands for the medium to lower end of the market largely through such localised outlets,” said Ali Said, chief of the food and livelihood support programme at the Food And Agriculture Organisation of the U.N. in Zimbabwe.

According to the Ministry of Lands, Agriculture, Water, Climate and Rural resettlement, smallholder farmers are the country’s major horticulture producers and ZIM-SHEP is designed to assist these farmers with specialised skills and also help with access to markets.

Self-taught farmers such as Mushowe have already shown the contribution of smallholders in meeting local needs, despite the lack of access to agri-finance.

“I wouldn’t mind having more space to expand vegetable production but I am also aware that expanding will require more resources which I cannot afford at the moment,” Mushowe said.

Despite the International Fund for Agricultural Development (IFAD) supporting Zimbabwe through the Smallholder Irrigation Support Programme, where communities are provided with irrigation systems with particular interest in horticulture, such support is yet to reach Ntabazinduna farmers such as Ntuli.

“We would certainly welcome any form of support. We have already proven to ourselves how much we are contributing towards feeding such a big city like Bulawayo. Obviously we can do more, but for now this is what we can do,” Ntuli told IPS.

FAO’s Said said smallholder horticulture production can grow with proper interventions from both government and private investors as they have already proven their capability to meet localised needs.

“Climate change and the accompanying reduced rainfall and dry spells has dealt a huge blow to horticultural production, most of which rely either on surface and underground water. The water sources have become unreliable and no longer able to sustain crop production throughout the year as in the past. There is thus need to ensure availability of reliable water through drilling of boreholes and well as construction of dams and weirs where feasible,” Said told IPS via email.

For now, smallholder farmers like Ntuli and Mushore are doing what they can with their limited resources to keep their local communities fed.