Four months before the United Nations holds the Global Food Systems Summit, youth advocates met virtually this week and under the ‘Good Food for All’ banner, presented their ideas for transforming food production and consumption 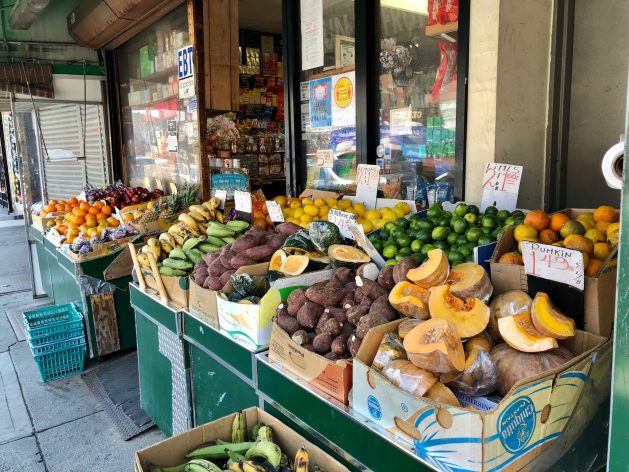 Produce stall in Brooklyn, New York. As the world faces rising poverty, conflict, climate change and COVID-19, the United Nations says ensuring access to safe, nutritious food for all is more urgent than ever as prepares to host the inaugural Global Food Systems Summit in September. Credit: Alison Kentish/IPS

UNITED NATIONS, May 5 2021 (IPS) - Global youth advocates have been told that they play a crucial role in ensuring that the world produces and consumes food with greater attention to nutrition, food security, equality and sustainability.

As the United Nations prepares to host the inaugural Global Food Systems Summit in September, the organisation is hosting a series of dialogues to correct flaws in the way food is grown, processed, packaged and marketed, hoping to tackle growing world hunger, water scarcity and climate change.

On Tuesday, the UN Food Systems Summit brought over 100 youth delegates to the discussion, under the theme “Good Food for All.”

The UNICEF Chief said the dialogue and summit are taking place at a time when the world needs to double up its efforts to alleviate childhood hunger.

“We are seeing stubbornly high rates of wasting and stunting – and a worrying increase in overweight and obesity. At the same time, the world faces a toxic combination of inequalities, poverty, conflict, climate change, COVID-19, and even looming famines that threaten further progress on nutrition,” Fore said.

She added that without urgent action, an additional nine million children under the age of five may suffer from acute malnutrition by 2022.

The dialogue was a chance for youth delegates to hear from other youth leaders, including U.S Agricultural Extension Specialist Janya Green. Green has been working on and promoting community food gardens since she was 12. She is a youth co-chair of one of five initiatives or ‘action tracks’ by the Food Systems Summit. Her role is to promote access to safe and nutritious food.

“Hunger worldwide is a huge problem,” she told the gathering. “Even before taking COVID-19 into account, hunger was projected to rise. If we do not reverse this current trend, the Sustainable Development Goal Zero Hunger target will not be met.”

Green announced that she has partnered with 25 fellow youth leaders and to launch a Youth #actforfood #actforchange campaign to bring the signatures of one million young people to the Global Food Systems Summit in September. They will be calling on leaders to transform global food systems.

Sustainable energy and climate crisis activist Emmanuel Sindikubwabo told IPS that the climate and nature crises are linked to poverty and hunger.

“We need avenues for environmental education and support for youth initiatives to use that knowledge to create decent work in agriculture for more youth. This can stimulate conservation and promote sustainable food production,” he said.

The youth leader, who heads Rwanda’s We Do Green Organisation and trains other young people in environmental conservation and climate change mitigation, says young people will need support to embrace their roles as agents of food systems change.

“We need more spaces and opportunities for youth-led initiatives for research and learning on climate-smart agriculture. We can then use this knowledge in local and context-based solutions for sustainable food systems,” he told IPS.

The UN Secretary-General’s Envoy on Youth Jayathma Wickramanayake told the dialogue that as world leaders step up action on commitments as part of the Decade of Action on the Sustainable Development Goals, transforming global food systems is one of the biggest hopes for reducing global warming.

“This is especially true when we consider that currently 33 percent of global greenhouse gas emissions are generated by food systems. Increasing industrial farming is resulting in loss of biodiversity at an enormous scale that could become irreversible,” she said. “The climate emergency and our unsustainable food systems are driving social injustice and inequalities, especially among our young people.”

According to the UN Office for the Coordination of Humanitarian Affairs’ Global Humanitarian Overview for 2021, the global recession wrought by the COVID-19 pandemic led to an increase in extreme poverty for the first time in over two decades.

It warned that globally, hunger is rising and stated that the devastating pandemic-climate change duo was affecting food systems worldwide.

The dialogue organisers say current models show too many food systems prioritising profit over purpose, putting nutritious food out of the reach of millions of households. This is where nutritional worries emerge. Add the use of fertilisers and pesticides to the equation, along with the exploitation of water resources and they say it is clear that the world cannot continue to produce and consume food as it is doing presently.

The Global Food Systems Summit hopes to transform these systems and offer solutions for feeding the world’s population in an efficient, equitable and environmentally sustainable way.