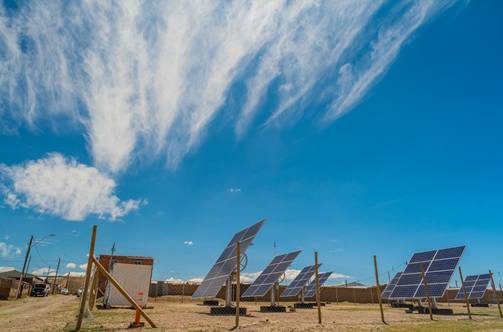 In the small Aymara community of Visviri, in the extreme north of Chile, solar panels have bolstered camelid wool production in a project involving 120 inhabitants. With their traditional knowledge and the improved processes made possible by solar energy, they boosted their livestock activity and managed to increase the value of their fibers fivefold. CREDIT: Ayllu Solar

SANTIAGO, Aug 16 2021 (IPS) - Communities in Arica y Parinacota, the region in the extreme north of Chile, are using solar energy and are being empowered by projects for shrimp and trout farming, the production of yarn from camelid wool, the production of tomatoes and cheese, and even the sale of surplus solar power to the national electric grid.

Small rural and indigenous settlements in the Andes highlands and foothills and in coastal areas of northern Chile organised and boosted or modified their production and lowered costs by using energy from solar panels, thanks to a project that began in 2015 with an investment of 13.9 million dollars in human capital and implementation.

More than 320 panels with 100 kW of power were installed with the technical and financial support of the non-governmental organisation Ayllu Solar, bolstering productive capacity in Aymara and Quechua villages, in addition to lighting up the families’ homes.

The project aimed to create advanced human capital to promote sustainable development in one of the regions with the highest solar radiation potential in the world, which seeks to become Chile’s solar energy hub.

“Chile’s installed energy totals 28 GW and in Arica the estimated solar potential is 42 GW. There is enough energy there to supply all of Chile,” Rodrigo Palma, director of the University of Chile’s Energy Centre, told IPS.

The beneficiary communities in the Arica y Parinacota region are home to a total of 1,300 people and the project held 150 workshops to train them. The mainly arid altiplano and coastal region, which also has pampas grasslands, has a population of 220,000 people.

In the municipality of Camarones, 120 km south of Arica, the regional capital 2,000 km from Santiago, a facility was built to grow river shrimp and fatten trout, treating the water with solar radiation to remove arsenic using photochemistry.

“We started with a shrimp farming plant and added permanent trout production. Today we have 12, 000 trout raised from fry brought from the Andes,” Javier Díaz, president of the 24-member Solar Aquaculture Cooperative (Acuisol), told IPS by telephone.

“We took the shrimp fry from the river and are putting them in 20 pools, 1,000 in each. Ever since I was a boy I wanted to breed the local shrimp, endemic to the valley and prized for their quality,” he proudly explained from the half-hectare farm where Acuisol built breeding ponds and tanks.

“Restaurants are very interested and we already have contacts in Japan to export trout and shrimp,” he continued enthusiastically. 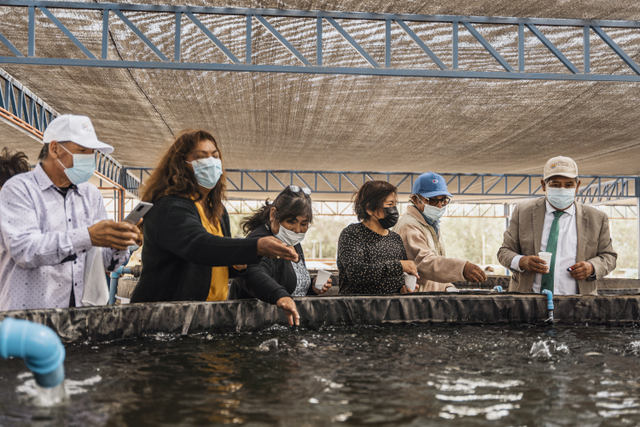 The community members involved in the Camarones project, who are part of the Solar Aquaculture Cooperative in the northern Chilean region of Arica y Parinacota, now hold a trout festival and a shrimp festival to celebrate the seafood that they raise in their pools and ponds, thanks to the solar energy installed on their fish farm. CREDIT: Ayllu Solar

Now they are seeking funds for a cold-storage plant. “We have made contributions and many are not in a position to contribute any more,” Diaz said.

“We use 99.9 percent of the water here. We treat it in a plant, take it through a coil that takes advantage of solar radiation and return it to the system thanks to solar energy,” he said.

He also announced new projects. “With the fecal waste we will make nutrients to grow hydroponic vegetables. And we want to make pellets, grow alfalfa and produce honey,” he explained.

“We have a wonderful sun provided by our Tata Inti (father sun) practically all day long,” he told IPS on his 69th birthday.

“We started with 50 goats. Today we have 220, most of them young because we have dedicated ourselves more to breeding than to producing milk for cheese,” Centella Sajama said.

“We irrigate with sprinklers and electric motors at zero cost. We have an electric milking machine. It used to take my parents an hour and a half to milk five goats; today we milk 35 goats in 40 minutes,” he said from La Estrella, located 95 km from Arica.

“They suggested to me that we should plant three hectares of prickly pears, a fruit that does not need much water, and we did so. We also planted eight hectares of alfalfa and now we’re adding five more hectares,” Centella Sajama said.

Excited, he explained that in his community “the elderly and their children started to return and the community began to be repopulated. Today we are building houses, we have drinking water, electricity, modern irrigation, ponds and the best shed and the best dairy in the foothills.” 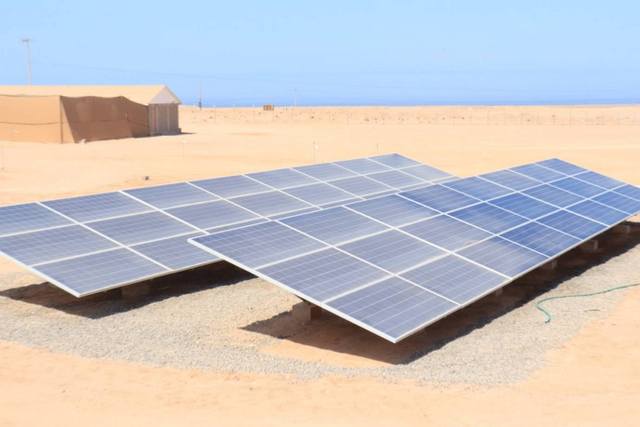 The ochre-coloured desert landscape is interruted by two rows of gray solar panels in a coastal area in the extreme north of Chile, just six km from Peru. Thanks to photovoltaic energy, the 80 small farmers of the Pampa Concordia Association were able to improve their horticultural production and bring it to the supermarkets of Arica, the regional capital. CREDIT: Ayllu Solar

Juan Carlos Cárdenas, president of the Pampa Concordia Association, which brings together 80 small farmers on the coast, said “solar packing” has improved their production of tomatoes, cucumbers, peppers, cherry tomatoes and basil in ways they did not expect.

The community “solar packing” project established by Ayllu Solar included the technical planning, the sizing of the photovoltaic plant and the space required, together with the integral process of production and selection of tomatoes for collective commercialisation, supported by the new energy.

“We decided to form a cooperative and we picked up the projections of drought. One problem was to manage our marketing. Packing is a tool and it comes with a certificate and health regulations. We used to each be on our own,” he said.

“As a cooperative we were able to even become suppliers for supermarkets,” Cárdenas said, describing AgroConcordia‘s achievements.

The 80 participating families have 350 hectares, but “based on the availability of water, 120 hectares are in full production,” he said, explaining one of the chronic problems facing farmers in the area: access to water, which has worsened due to the drought.

In Visviri, 130 km from Arica, solar energy is used in a camelid – alpaca, llama and guanaco – wool collection and processing centre. The project aims to generate an opportunity for sustainable development and involves 120 inhabitants of one of the poorest rural municipalities in Chile: General Lagos, of which Visviri is the municipal seat.

Based on traditional Aymara knowledge, using solar energy and improving production processes, they have boosted livestock farming. Their success is reflected in the fact that they have managed to increase the value of their products fivefold.

In Altos de Azapa there are 41 beneficiaries of an on-grid solar panel system and an energy management programme. They recovered an abandoned 50 kWp photovoltaic plant, installed electrical conduits and obtained permits to connect it to the grid using the Distributed Generation Law (net billing), which allows the sale of surplus solar energy.

In Caleta Vitor, solar energy is used to process fruit and vegetable products from the Vitor and Chaca valleys, to which they add value through dehydration processing.

Ayllu Solar was an innovation initiative of the non-governmental SERC Chile (Chilean Solar Energy Research Centre), executed by the universities of Tarapacá, Chile and Antofagasta, with the support of the BHP Billiton Foundation, a Dutch mining company that is one of the largest in the world in the industry.

Education and sustainability were also priority areas in the initiative.

“Ayllu, which means community in Quechua and Aymara, aimed to create human capital to promote the sustainable development of rural and urban communities in Arica y Parinacota, through solar energy, in order to use science to improve the quality of life of local residents,” regional director Lorena Cornejo told IPS.

“For six years, six community production projects with replicable and scalable characteristics were developed and implemented in the region’s four communes (municipalities),” she said. “Sustainable energy solutions were created, using solar energy, which boosts their development and adds value to their products.”

“The communities played a key role in all phases of implementation,” noted Cornejo, who is also in charge of community-scale projects at the University of Tarapacá.

Ayllu’s regional director admitted to IPS that “the lack of resources to continue the initiatives could jeopardise the sustainability of the installations and the development of the communities.”

“There was not enough support due to the COVID pandemic; the villagers need periodic technical support,” she said.

To give them continuity, the Ayllu Solar Associative Network (RAAS) was created, which Cornejo represents and which is led by the University of Tarapacá in Arica.

“Base funding is required to continue supporting the projects implemented as well as initiatives proposed by new communities,” she said. 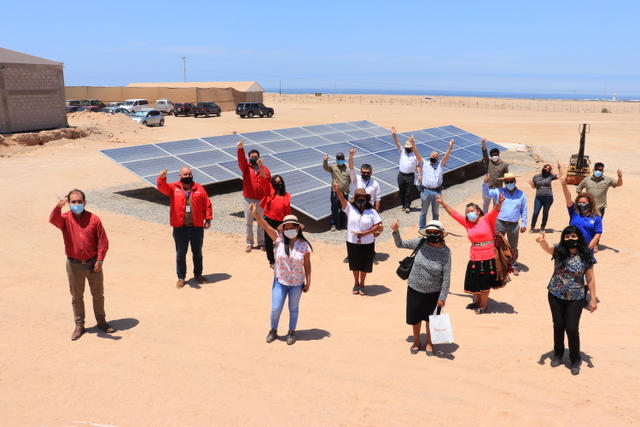 At the University of Tarapacá, in Arica, 27 students are earning a degree in Water and Solar Energy for Arid Zones, which draws on the experience of indigenous and peasant community members trained in the use of this energy source. In Chile, only two percent of photovoltaic energy is used in agriculture, but the sector’s costs could be reduced with the use of solar power, whose potential is enormous in the northern desert area of the country. CREDIT: Ayllu Solar

Cornejo said there are infinite alternatives to replicate the projects and “there is currently a portfolio of other productive development projects that could be implemented with solar energy support.”

“It will depend on the financing and the involvement of the state,” she said.

Rodrigo Palma believes that the Ayllu Solar projects can become widespread because they combine renewable energy with support for local productive activities in small communities.

Palma believes that what has been achieved with camelid wool can be applied to sheep, or in aquaculture, greenhouses, agricultural water pumping, water desalination, green hydrogen and other areas.

Meanwhile, Chile is banking on non-conventional renewable energies (NCRE), the use of which is expanding quickly in this long, narrow country nestled between the Andes mountains and the Pacific Ocean, with a population of 19.3 million.

The Chilean Association of Renewable Energies and Storage (Acera) reported that in June, NCRE produced 23 percent of the power in the national grid, equivalent to 1,200 GW hour. That month, it commented that “Chile surpassed 10,000 MW of installed renewable energies.”

A small but valuable portion of these unconventional energies is changing the production and lives of hundreds of indigenous people and farmers in small communities in the extreme north of Chile.