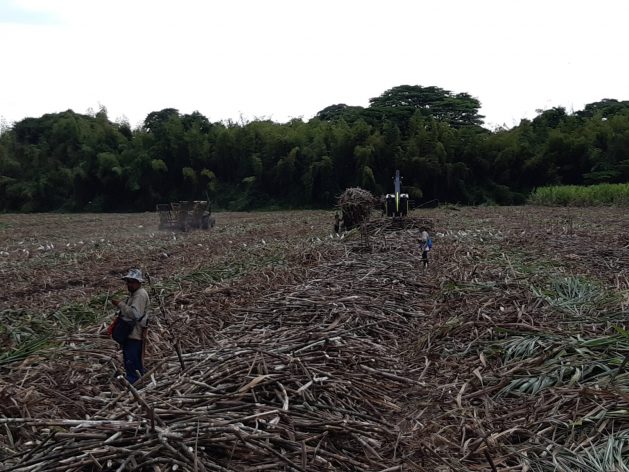 One phase of Colombia's sugarcane agroindustrial production consists of burning bagasse to generate biofuels. In the picture, workers arrange sugarcane waste in a field in the municipality of El Cerrito, in the southwestern department of Valle del Cauca. CREDIT: Emilio Godoy/IPS

BOGOTA, Mar 17 2022 (IPS) - As a visitor drives across the plains of the department of Valle del Cauca in southwestern Colombia, green carpets dominate the view: sugarcane fields that have been here since the area got its name.

The long tentacles of dirt roads draw the visitor into the thicket of golden-crested flowering green plants, which will be cut to ground level in a few months, the start of an industrial process and the restart of an annual agricultural cycle.

But this crop has left a lasting and damaging imprint on the soils, some of the most fertile in this South American nation of 51.7 million people.

Irene Vélez, an academic at the public University del Valle, said legislative changes and the opening of the market to imported sugar have led to the shift from sweetener to fuel.

“One of the consequences of this process is the expansion of the agricultural frontier to other regions of the country, because the land is cheaper and there is a different system of relations between landowners and the agro-industrial sector,” she told IPS from the Portuguese city of Coimbra, where she is doing post-doctoral studies.

Along with sugar and molasses for industrial consumption, sugarcane also provides ethanol or ethyl alcohol, which by law has been blended since 2005 in a volume of 10 percent per liter of gasoline in Colombia.

Proponents argue that this biofuel helps curb dependence on oil, and improves the octane rating of gasoline by oxygenating, which reduces urban pollution.

But in contrast, a vehicle consumes more blended fuel for the same trip due to its lower calorific value than gasoline and, the higher the mix, the higher the emission of the carcinogens formaldehyde and acetaldehyde and ozone, especially in winter, which cause respiratory problems, according to a 2007 study by researchers at Stanford University in the United States.

In parallel, the country refined 396 million liters of ethanol in 2021, 0.5 percent less than the previous year. But domestic production does not meet demand, so last year it imported an additional 64 million liters, mostly from the United States, a drop of almost 400 percent compared to a year earlier, according to Asocaña.

Colombia is the third largest ethanol producer in the region, after Brazil and Argentina. This South American nation extracts ethanol from sugarcane and biodiesel from palm oil. The industry enjoys tax exemptions and subsidies, thanks to the Sugar Price Stabilization Fund, which has been in operation since 2000. 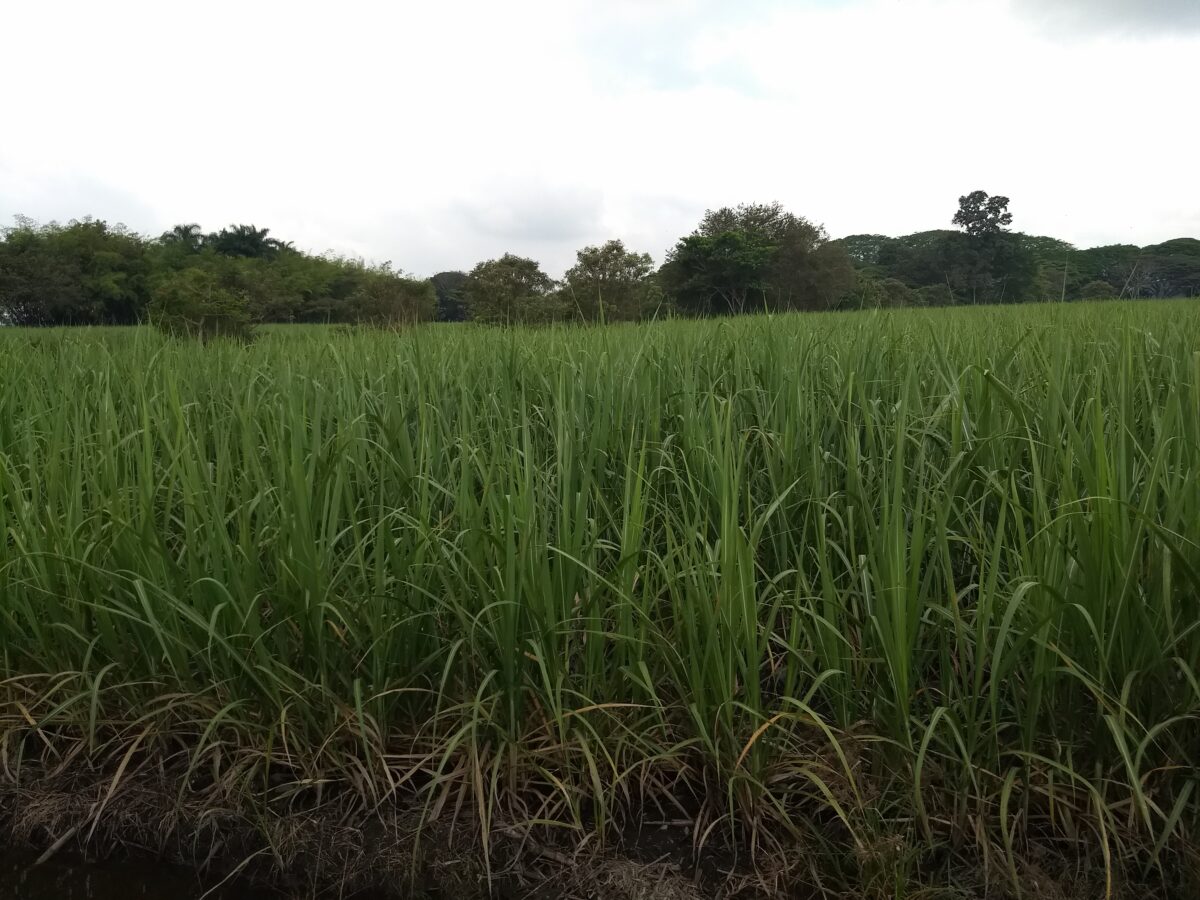 The expansion of sugarcane cultivation in Colombia has its epicenter in the Cauca River valley, in the southwest of the country, and has left a trail of water exploitation, reduction of biodiversity and pollution from the use of pesticides and synthetic fertilizers, which is not compensated by the use of part of the crop to produce biofuels. CREDIT: Emilio Godoy/IPS

The appearance of ethanol on the energy scene extended the sugarcane frontier in Colombia and fortified the vertical integration of the industry.

In the Cauca River valley, where most of the country’s crop is concentrated, sugarcane covers more than 225,000 hectares, which “is close to the total area available for planting sugarcane” in the region, according to Asocaña.

There are 14 sugar mills operating in the area, which directly cultivate 25 percent of the fields, while buying the rest of the cane from some 2,750 producers. The average size of the 3,300 farms that supply the mills is 63 hectares. In addition, they operate 12 energy cogeneration facilities, powered by sugarcane bagasse.

But that expansion has left social, environmental, economic and cultural impacts on local communities, says the report “The Green Monster. Perspectives and Recommendations from the Black Communities of Northern Cauca, Colombia regarding the Sugar Sector in Colombia”, published in June 2021 by the non-governmental organizations Palenke Alto Cauca-PCN and the UK-based Forest Peoples Programme.

The main impacts include the effects on soil, rivers and groundwater due to the use of pesticides such as glyphosate, soil compaction caused by the intensive use of agricultural machinery, soil erosion, polluting emissions due to the practice of burning sugarcane fields before replanting, deforestation arising from the increase in the area planted, and the monopolization of water sources.

The expansion of large-scale sugarcane plantations in Valle del Cauca has resulted in loss of land, damage to water resources, health problems, displacement and violence. 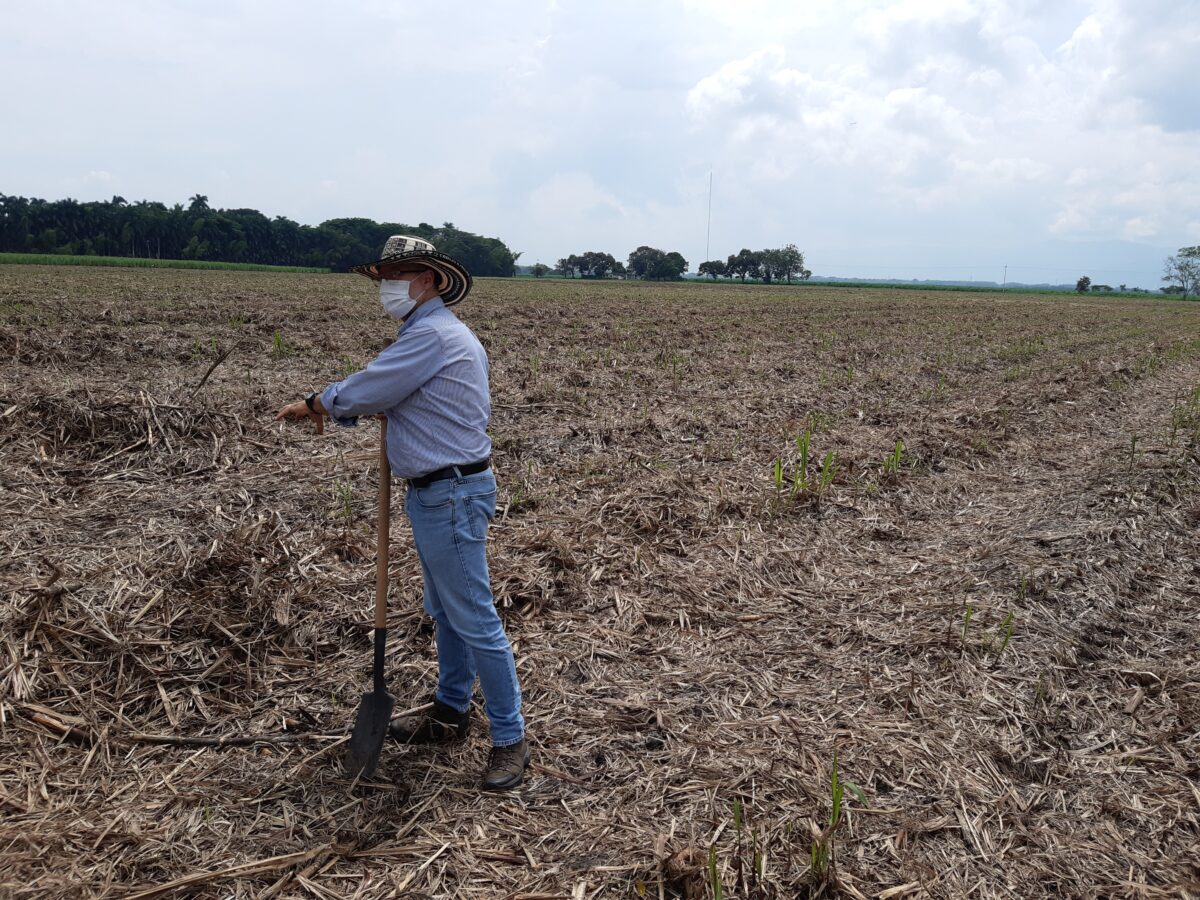 Carlos Molina, director of the El Hatico nature reserve in the municipality of El Cerrito, in the southwestern Colombian department of Valle del Cauca, stands in the middle of a cut sugarcane field on his farm. He advocates the transition from conventional sugarcane to an organic crop that contributes to the use of biofuels for energy decarbonization. CREDIT: Emilio Godoy/IPS

Carlos Molina, legal representative and one of the owners of the El Hatico company, said it is possible to reverse the damage caused by sugarcane, as he gestured to the surrounding fields.

“If we don’t restore now, we are going to run out of fuel. If they don’t change things, producers are going to go bankrupt. The solution is to show the alternatives and offer incentives for transformation,” he told IPS during a tour of his farm’s sugarcane crop in the municipality of El Cerrito, in Valle del Cauca.

El Hatico is a 285-hectare farm, of which 110 hectares are used for organic sugarcane production and 76 hectares for 245 grazing dairy cows. Thanks to the farm’s sustainability, it has achieved nature reserve status.

Faced with the loss of income due to soil deterioration, in the early 1990s the owners began a shock therapy program to abandon irrigation, pesticides and synthetic fertilizers and introduce natural fertilizers and other agroecological practices.

“We made an abrupt transition and that cost us 30 percent of our production, then we recovered. Sustainable management and value-added improve yields,” said Molina, who belongs to the eighth generation of sugarcane growers in his family.

For example, a conventional hectare requires about 180 kilograms of nitrogen and 12 billion cubic meters of water per year, while an organic farm needs much less.

The legal framework for biofuels began in Colombia in 2001 with regulations on their use and the creation of incentives for their production, use, marketing and consumption. In 2004, another regulation expanded the conditions to stimulate the production and marketing of biofuels of plant and animal origin to obtain biodiesel.

That same year, the National Council for Economic and Social Policy, which brings together seven ministries and the governmental scientific sector, issued guidelines to promote the sustainable production of biofuels in the country, proposing strategies to this end.

As a result, sugarcane refineries for biofuels started up in 2006, six of which operate in Valle del Cauca and one in the central department of Meta.

In 2013, the blend of ethanol per liter of gasoline increased to 10 percent and that of biodiesel to 12 percent. 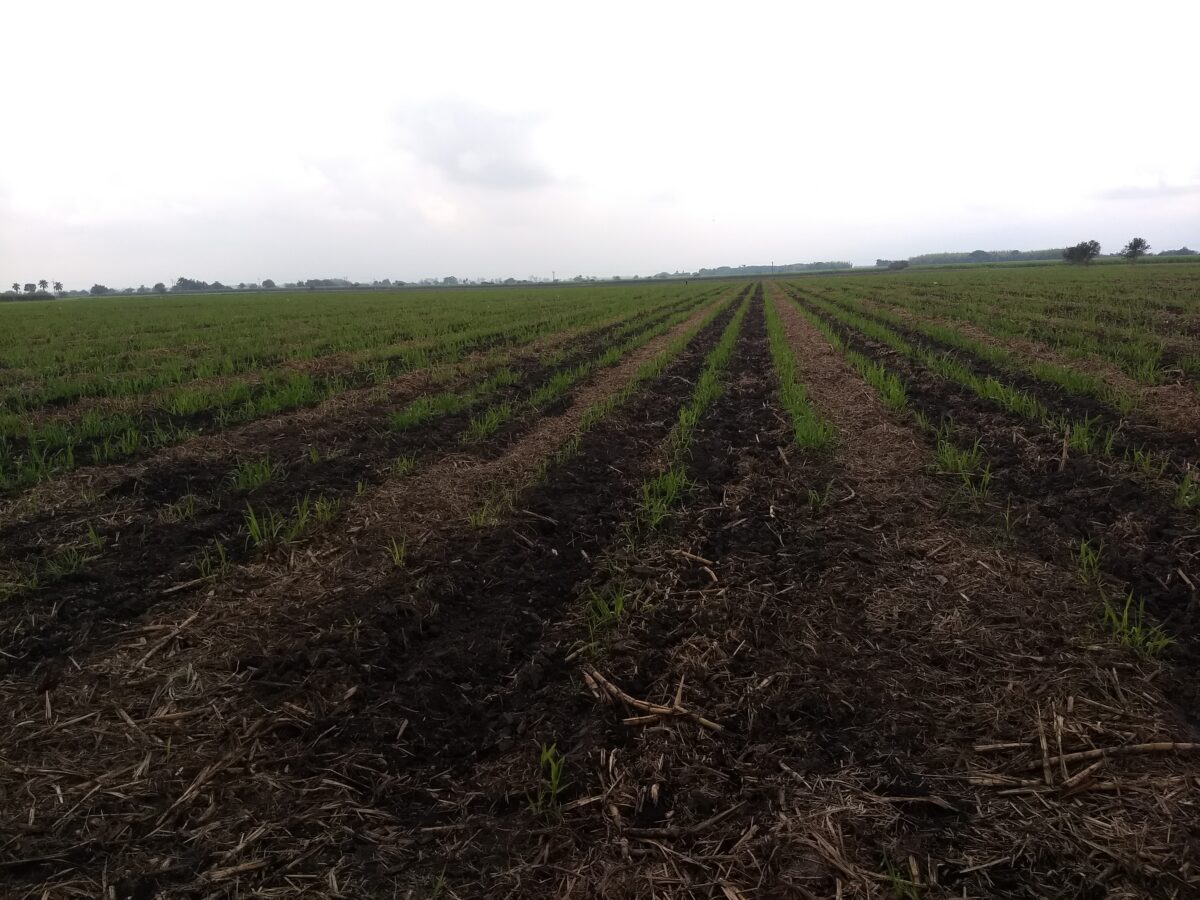 A sugarcane plantation in the municipality of El Cerrito, in the department of Valle del Cauca, in southwestern Colombia. Cutting, slashing and burning are the three steps of cultivation: cutting the sugarcane, harvesting the crop and setting fire to the residues, a practice that is harmful to the health of the soil and the air. CREDIT: Emilio Godoy/IPS

The shift of sugarcane towards ethanol production is paradoxical, as the crop causes environmental impacts but the fuel reduces emissions of carbon dioxide (CO2), the gas generated by human activities that is responsible for global warming.

Sugarcane ethanol reduces 74 percent of polluting emissions, compared to corn and canola ethanol – 45 percent and 25 percent, respectively – according to the 2012 study “Life Cycle Assessment of the Biofuels Production Chain in Colombia“, sponsored by the Inter-American Development Bank and the national Ministry of Mines and Energy.

By law, ethanol emissions have had limits in the country since 2017. Data from the non-governmental Sugarcane Research Center for six mills indicate that the average in 2016 was 551 kilograms of CO2 per cubic meter of fuel and 558 in 2017.

These results were below the regulatory ceiling of 924 kilograms for 2017 and 889 for the following year. In 2021, the ceiling stood at 780 kilograms.

The sugarcane manufacturing process generates the greatest amount of pollution, with 249 kilos of CO2, followed by planting and harvesting (181 kilos), effluent treatment (89) and transportation to blending centers (39).

Biofuels, part of the NDC

In its 2020 Nationally Determined Contribution (NDC) update, Colombia pledged to reduce its emissions by 51 percent by 2030, down from 258 million tons of CO2 in 2015, the base year, to 169 million tons, mainly by combating deforestation.

Within this voluntary goal, Colombia pledged that at least 20 percent of its energy mix would be made up of biofuels by that year, subject to financial support from industrialized countries.

The independent Climate Action Tracker calls the NDC “highly insufficient”, as other approaches are needed, especially in energy and transportation. Although transportation accounts for 12 percent of the country’s total emissions, mitigation actions, such as the deployment of electric cars, are insufficient.

The Colombian government projects stable ethanol demand between 2022 and 2025, of about 60,000 barrels per day of the biofuel.

“The agroecological transition could be completed in three years, without any problem,” said Molina.

But Vélez disagreed. “It is associated with an agro-technological package that involves improved seeds that need pesticides, fertilizers and privatized seeds from transnational corporations. There is no point in switching from sugarcane to organic pineapple, for example. If land grabbing continues, we are not generating the necessary transition,” he said.