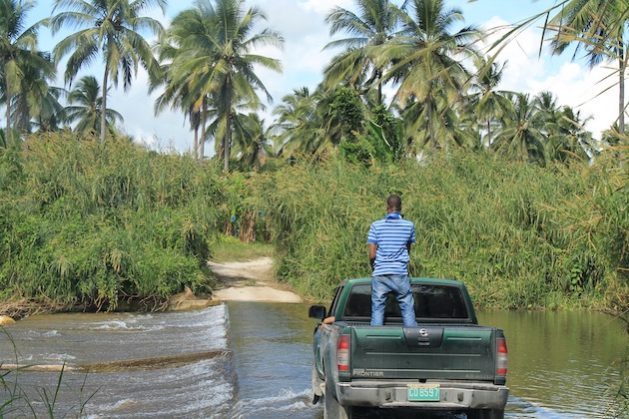 Crossing the Rio Cobre, at a crossing at Tulloch, St Catherine. Water from the Rio Cobre is diverted to the artificial recharge system at Innswood. Credit: Zadie Neufville/IPS

Kingston, Jamaica, Apr 26 2022 (IPS) - It will take billions of dollars and many years to fix a growing problem that has placed Jamaica into the unlikely bracket of being among the world’s most water-scarce countries due to the unavailability of potable water.

The worsening water crisis of the Kingston and St Andrew (KMA) metropolis results in rationing for months in some years. The lock-offs are exacerbated by droughts, broken pumps and the crumbling pipelines making up the water distribution system. At the same time, in the aquifers below the capital city, more than 104.3 million cubic meters of water, or about 60 percent of the available resource, remained unusable due to pollution.

A 2020 study, Groundwater Availability and Security in the Kingston Basin, found that high levels of nitrates in the city’s main aquifer were making the water unusable for domestic purposes. The study conducted by researchers at the University of the West Indies (UWI), Mona Campus’ Departments of Chemistry and Geology and Geography, pointed to the contamination by effluent from the septic and absorption pits that litter the city’s landscape and saline intrusion from over-pumping as the cause of the pollution.

Lead researcher Arpita Mandal told IPS via email that the two-year study, which started in 2018, showed no “significant change” in the levels of chloride and nitrates during the period, noting: “The historic data is patchy, but the chloride and nitrate levels have always shown high above the permissible limits”.

The report concluded that there is an urgent need to address the continued contamination of the Kingston Basin, but Debbie-Ann Gordon Smith, the lead chemist in the study, noted that the cleaning process would be extremely lengthy and costly.

According to the study, many of the wells across KSA were decommissioned because between 50 and 80 per cent of the effluent from absorption pits and septic tanks goes directly into the ground. The report said the same was true for many Caribbean Islands, including Barbados, Antigua and Barbuda, and Grenada.

Noting the concerns for the quality and quantity of water in the aquifers of the KSA, the managing director of the Water Resources Authority (WRA) Peter Clarke pointed to the existence of several working wells in use by companies that treat the water to potable standards for industrial use.

He said that while the contamination from “200 years of pit latrines” (in KSA) continues to cause concern, “the hardscaping of car parks and roofs” means there is less water available to recharge the aquifer. Therefore, to preserve the continued viability of the aquifer, the WRA, Jamaica’s water management and regulatory body, is preparing to put a moratorium on new wells.

Clarke is confident that the island has enough water and reserves of the precious liquid for decades to come. He noted, however, that in Jamaica’s case, it is the distribution and access that makes water a scarce commodity in some areas.
“It is where the people are, where water is distributed, and access to the water that is important,” he said.

In the process, the water company mended 40,000 leaks, which back then were reportedly costing the city 50 percent of the potable water it produced. They also replaced the ageing pipelines installed before the country’s independence in 1962. The programme continues with the replacement and installation of hundreds of miles and pipelines.

Clarke explained that Jamaica’s groundwater supply is three to four times greater than that which runs to the sea via the island’s 120 rivers and their networks of streams and provides 85 per cent of potable needs. Jamaica uses roughly 25 per cent of its available groundwater resources and 11 per cent of its accessible surface water.

To satisfy the growing demand in the KMA, Clarke said, the Ministry of Economic Growth and Job Creation is considering a new treatment plant in St Catherine among its planned and existing solutions. In 2016, an artificial groundwater recharge system was built at the cost of just over 1 billion Jamaican dollars or 133 million US dollars, on 68 acres (27.5 hectares) of what was once cane-lands in Innswood, St Catherine, to replenish the wells that supply the most populated areas of the metropolis and surrounding areas.

The system currently injects an extra five million gallons of potable water per day to replenish abstractions from the supply wells. The Ministry of Local Government and Rural Development announced last month that it is considering similar systems to store excess water for use in times of drought and to reduce evaporation from surface systems like reservoirs and dams in other water-stressed areas of the island,

Both Gordon Smith and Mandal agree that Kingston’s water shortage is worsened by climate variations, increased urbanisation, and the inadequate management of existing resources. In the last few years, a construction boom in the KMA has transformed the KMA, placing increased pressure on the available water supply.

The UWI’s Climate Research Group has warned of increased temperature and extremes in rainfall and droughts. Based on the 6th Assessment Report (AR6) of the Intergovernmental Panel on Climate Change (IPCC), the Group warned Caribbean governments to brace for more prolonged and more intense droughts and higher temperatures that will impact, among other things, food production and water supplies.

In the case of the KSA, the NWC has continued to build and upgrade the city’s sewage treatment capacity in the areas affected to end sewage and wastewater contamination of the aquifer. Hopefully, the aquifer will naturally flush itself when the work is complete.

“Jamaica is not short of water,” Clark said. “It’s a distribution issue”.