CHILE: Teen Pregnancy, a Problem That Won’t Go Away

SANTIAGO, Nov 2 2009 (IPS) - Chile currently stands out for its spectacular progress in a number of health indicators, including maternal and child mortality and chronic malnutrition. But these successes obscure an acute social problem that refuses to yield: the steady rise in the number of teenage mothers. 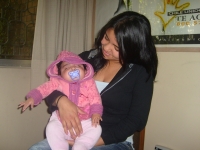 “It’s hard to get up the nerve to talk to your parents or teachers about sex; it’s embarrassing. And you can’t just go to a clinic and ask for birth control, because everyone there knows you,” Maura Escobar, a Chilean girl who gave birth four months ago at the age of 15, told IPS.

When she discovered she was pregnant, she tried desperately to self-induce an abortion. She drank herbal concoctions, took martial art classes and even considered buying misoprostol, known as the “abortion pill.” But she had no money.

When she was in her fifth month, a friend took her to Chile Unido, a private non-profit foundation that provides assistance to women with unwanted pregnancies, to prevent them from having an abortion.

This South American nation is one of the few countries in the world where abortion is illegal under any circumstances, even when the mother’s life is at risk.

Near the end of her pregnancy, Escobar suffered complications for which she was hospitalised, and her daughter was born premature.

Escobar’s story is far from unique, it is repeated over and over again in Chile and the rest of Latin America, the region with one of the highest rates of teen pregnancy in the world. Of the total number of live births in Chile, almost 15 percent are to mothers under 19. Most of these young women are from the lowest socioeconomic sectors.

“These women are forced to change their life plans; they have little chance of finishing their studies or of working, because most have to stay home to care for their babies, unlike teenage fathers,” IPS Claudia Dides, director of the Gender and Equity Programme of the Chilean chapter of the Latin American School of Social Sciences (FLACSO), told IPS.

In addition to putting their health at risk, being a mother before the age of 19 perpetuates poverty and gender inequalities, experts says.

In La Pintana, a shantytown on the outskirts of Santiago, there were 80.9 teenage births per 1,000 girls aged 15 to 19 in 2006, compared to only 6.8 births in that same age range in the affluent suburb of Vitacura, which doubles La Pintana in the Human Development Index, in terms of income.

A joint study by FLACSO and the United Nations Population Fund (UNFPA) identified 10 sexual and reproductive health challenges in Chile in the framework of the Action Plan adopted at the 1994 Cairo International Conference on Population and Development, and the 2000 U.N. Millennium Development Goals agreed on by 189 nations.

“The first challenge deals precisely with teenage pregnancy,” Dides said. The other challenges refer to lack of sex education and inadequate sexual and reproductive health (SRH) services for young people, an increase in sexually-transmitted infections among teenagers, and absence of abortion statistics.

Other problems identified include difficulties in accessing and delivering contraception, lack of ethnic considerations in the design of SRH and HIV/AIDS programmes, and low participation of men in reproductive care.

From 2000 to 2005, the number of live births in the country dropped from 248,694 to 230,831, in line with the ageing of the population. But the adolescent fertility rate in this country of 16 million people has not gone down at the same pace as that of women over 19. The problem is particularly alarming among girls under 15.

A matter of political will

Forty different studies on teenage pregnancy were conducted in Chile from 1991 to 2007. “We have the scientific evidence necessary to make policy decisions,” Dides said.

Experts agree that the problem is linked to low contraceptive use, especially in poor sectors, to the absence or inadequacy of sex education, and to a lack of adolescent-friendly health services.

A recent major initiative by the government is the Sex and Relationship Education Participatory Action Plan (PlanEsa), included in the health policies for the 2005-2010 period, which is aimed at involving school authorities, teachers, parents and students in efforts to help kids make informed decisions about sex.

Education Ministry sources told IPS that the goals set by PlanEsa are being met.

But Dides has a different view. “A number of programmes dealing with teenage sexuality have been introduced since 1993, but none has succeeded in implementing a lasting public policy. They don’t go beyond small pilot trials that depend on the political will of the minister of the moment,” she said.

According to this expert, the Education Ministry “has been a bastion of conservative thinking in sex education matters. I’d even venture that (ministry authorities) have been remiss in their duty to Chile’s young people, because of their ideological beliefs.”

Since the return to democracy in 1990, following 17 years of military dictatorship, Chile has been governed by the centre-left coalition Concertación de Partidos por la Democracia, which includes the conservative Christian Democrat Party.

Starting in 2010, the Education Ministry will also promote “a dialogue involving experts, teacher training institutions and organisations involved with sex and relationship education” to define an “educational strategy” in this area, ministry spokespersons told IPS.

It will also seek to improve coordination with the Health Ministry to achieve more effective interventions at the local level. But with the government of socialist President Michelle Bachelet – a firm promoter of progressive social and gender-sensitive policies – coming to an end in March 2010, the future seems uncertain.

A common complaint voiced by the young girls who turn to the University of Chile Teenage Reproductive Health and Integral Development Centre for help and advice is that they can’t talk to their parents about sex, the centre’s assistant director, Electra González, a social worker with 28 years of experience, told IPS.

So any precautions these girls take depend solely on how independent they are and whatever information they’ve been able to obtain on their own, González said.

“We need to have appropriate services for teenagers and young people, services that provide quality health care that is specially designed for them, because, as several studies have shown, young girls always end up going where their moms and grandmothers go, and that’s a problem,” Dides noted.

A good step in this direction are the “Teen-Friendly Units” opening up this year in primary health care facilities, staffed by birth attendants, psychologists and social workers.

The same teams working in these units are also reaching out to the community and going out to work in the field, Paz Robledo, head of the Health Ministry’s Adolescent and Youth Health Programme, told IPS.

The Teen-Friendly Units were developed under the 2008-2015 National Health Policy for Adolescents and Youth. Fifty-four units were created this year alone in 54 communities, and the budget to establish 277 new centres in 2010 is currently under discussion.

Meanwhile, Congress has delayed consideration of a bill dealing with fertility planning information, guidance and health care, submitted by Bachelet with the aim of guaranteeing free, confidential delivery of birth control, including emergency contraceptives, to all girls and women above the age of 14.

This responds to a 2008 Constitutional Court ruling that banned distribution of the so-called ‘morning after’ pill in public health services, upholding an appeal filed by conservative legislators against a 2007 presidential decree.

According to Robledo, the country has to address the needs of its almost 4.3 million teenagers and young people, who represent over 25 percent of the population.

“What do we want from and for our young people and adolescents? What is the most efficient way of coordinating efforts among the various sectors of the state towards providing adequate social protection for this sector of the population?” and how many resources should be invested in these tasks are all issues that Robledo feels should be discussed by society.

Maura Escobar is “very hopeful” about her future, but unfortunately her case is an exception. She now has her mother’s full support, she’s gone back to school, and while she’s lost all contact with the baby’s father – a young man of 23 – she’s confident that she and her baby are going to be just fine. One thing’s for certain, though: her “life has changed for ever,” she tells IPS as she holds her daughter in her arms.