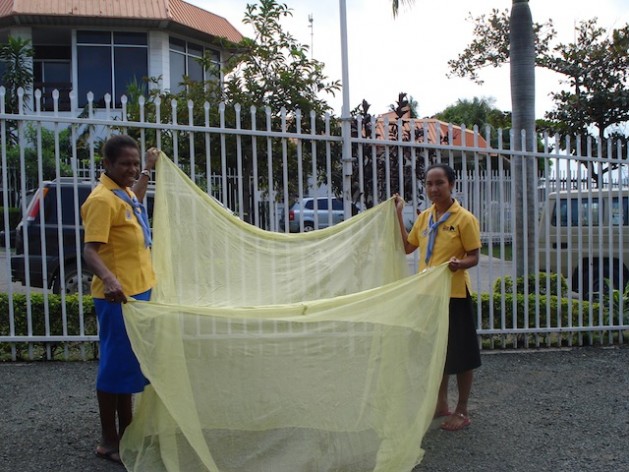 Rotarians Against Malaria display one of the treated mosquito nets being used around Papua New Guinea. Credit: Catherine Wilson/IPS

PORT MORESBY, Jul 26 2012 (IPS) - In Papua New Guinea, a Pacific Island nation located south of the equator, 90 percent of the population is at risk of malaria and 1.9 million cases are reported every year.  But, according to a recent medical study, a programme to distribute long-lasting insecticide treated mosquito nets to every district in the country has dramatically reduced malaria infections.

The World Health Organisation (WHO) claims half the world’s population is susceptible to the infectious disease transmitted to humans by mosquitoes carrying the malaria parasite, with pregnant women, young children and people living with HIV/AIDS especially vulnerable.  In 2010 there were 216 million reported cases of malaria worldwide and 655,000 fatalities, representing a 25 percent drop in the mortality rate since 2000.

This progress, while still short of the global target of 50 percent mortality rate reduction, is attributed to the widespread use of insecticide treated bed nets, improved diagnosis and access to medicines.

In Papua New Guinea, which accounts for 36 percent of all confirmed malaria cases in the Western Pacific region, prevention is vital, as mosquitoes quickly adapt to greater human mobility and higher recorded temperatures.

“Malaria has always been highly endemic in all lowland areas of Papua New Guinea and higher areas up to about 1600 metres have been prone to epidemics whenever weather conditions made transmission possible, for example, a combination of slightly (increased) humidity and higher temperatures,” said Manuel Hetzel, head of the Population Health and Demography unit at the Papua New Guinean Institute of Medical Research.

The Pacific Climate Change Science Programme reports that maximum temperatures in Port Moresby have increased by 0.11 degrees Celsius per decade since 1950 and believes they could rise by 0.4-1.0 degrees Celsius by 2030.  The government predicts climate change could result in 200,000 more people in highland regions being affected by malaria epidemics.

Jacob Ekinye, director of the adaptation division at the Office of Climate Change and Development (OCCD), which was established in 2010, confirmed his office was developing a national strategic response to the impact of climate change on the vector borne disease through a Sub-Technical Working Group on Malaria, comprising representatives of the OCCD, WHO and Papua New Guinean Institute of Medical Research.

In the meantime, the National Malaria Control Programme (NMCP), a partnership between the National Department of Health, Rotarians Against Malaria, Population Services International, OilSearch Health Foundation and the PNG Institute of Medical Research, is working to improve vector control strategies, including distribution of Long Lasting Insecticidal Nets (LLINs).

An LLIN is a mosquito net treated in a factory with insecticide, which repels or kills mosquitoes that come into contact with its surface. Each net has a life span of at least three years.

The nets are most effective when used at night when the main malaria carrying mosquitoes are active, thus protecting people as they sleep.

Use of LLINs is officially endorsed by WHO as a form of vector control and, therefore, malaria prevention at the community level.  The health organisation claims that vector control “is the only intervention that can reduce malaria transmission from very high levels to close to zero” and suggests the most effective way to achieve widespread net protection “is through provision of free LLINs, so that everyone sleeps under an LLIN every night.”

Following the world’s first trial of insecticide treated mosquito nets in Papua New Guinea in 1986, a national distribution programme was implemented in 1989. Papua New Guinea’s success in obtaining a Global Fund to Fight AIDS, Tuberculosis and Malaria in 2004 was critical for Rotarians against Malaria (PNG), which has overseen the dissemination of 5.5 million nets in the country since 1997, partnering with the National Department of Health to distribute LLINs to 80 percent of the population.

According to Tim Freeman, the organisation’s project manager, the emerging factor of climate change has not altered the distribution programme.

“We are responsible for ensuring LLINs are distributed to every household in the country, regardless of whether they are considered high or low risk,” he said.

In Gulf Province alone, which has a population of 149,726, the NGO worked with provincial and church health services, village leaders and health volunteers during the second distribution programme in 2010 to issue 72,533 LLINs to households.  A further 1,540 nets were given to ante-natal clinics, 1,100 to boarding schools and 227 to hospitals.

Freeman confirmed that “all LLINs funded by the Global Fund are free to households and vulnerable groups, such as pregnant women.”

Despite the challenge of poor road and transport infrastructure in rural areas, with many villages only accessible by air, boat or long distance walking, an evaluation of the effectiveness of LLINs by the Institute of Medical Research, with a full report due this year, has shown positive results: household ownership of LLINs has risen to 80 percent, compared to 10 percent prior to systematic national coverage.

“Based on two large countrywide surveys, the data we have analysed so far indicates that the proportion of people infected with malaria decreased from approximately 12 percent in 2009 to below eight percent in 2011,” Hetzel said. “We also found that the distribution of LLINs resulted in a decrease in clinical cases in health facilities.  In some places, this decrease was quite dramatic.”

The Institute of Medical Research reported, “In the absence of any other major malaria control intervention, the observed reduction in malaria incidence and population prevalence can be considered a direct consequence of the net distribution.”

But there are challenges to sustaining the achievements, notably behavioural resistance of mosquitoes and continuation of funding.

“Studies conducted by the Institute of Medical Research have shown no resistance to the insecticide Deltamethrin used on the PermaNet brand of LLINs which are being used in Papua New Guinea,” Hetzel explained. “However, we saw mosquitoes starting to change their behaviour and start biting earlier in the evening.”

WHO has also highlighted that international funding, which peaked at two billion dollars in 2011, still remains short of the annual five to six billion required to meet global malaria control targets.

The Global Fund grant to Papua New Guinea will end in 2014 and new financing will be needed to ensure the fight against malaria remains on track.