Profiting from Sustainable Forests on Communal Land in Mexico 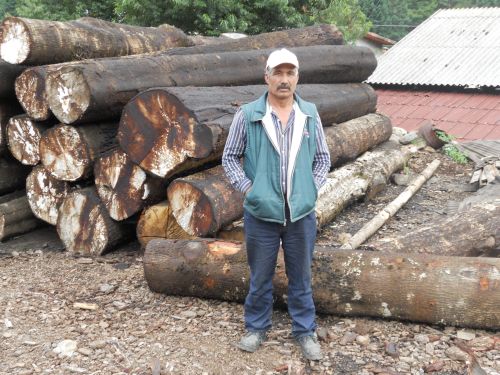 AMANALCO, Mexico, Jul 30 2012 (IPS) - Mario Guzmán plans to start cutting down trees again in August and September, the last months of the rainy season. “Now the roads are impassable, and the trucks can’t get in to haul out the timber,” the Mexican farmer, whose community is sustainably managing its forests, told IPS.

Guzmán lives in El Potrero, an ejido – an area of communal land used for agriculture, where community members own and farm their own plots – 150 km south of Mexico City.

El Potrero is one of the 11 ejidos that make up the Emiliano Zapata Union of Ejidos of Amanalco, founded in 1981. The Union has 2,400 member farmers, and has managed to preserve 11,600 hectares of forest, while commercially exploiting species like pine, holm oak, and oyamel fir.

The ejido is located in the Bravo-Amanalco river basin, which is key to the water supply in greater Mexico City.

“It’s a big help for us that we can benefit from the forests. For years we saw how a company made use of them, and we didn’t know if the profits ended up here, or went elsewhere,” said Guzmán, who grows corn, oats and potatoes on his 7.5-hectare farm, mainly to feed his own family.

The 51-year-old father of six, who immigrated to the United States and lived in New York from 2002 to 2004, is now president of the ejido’s vigilance council.

The Union of Ejidos is a successful example of sustainable forest management, and one of six pilot projects in this country for REDD+ (Reducing Emissions from Deforestation and Forest Degradation), a U.N. programme aimed at curbing climate change.

The ejido residents only cut down and sell older or damaged trees, to preserve the forests while profiting from the lumber. They also select trees that are closer to the dirt roads, to facilitate the extraction process and limit damage to the rest of the forest.

About 65 million hectares in Mexico are covered by forest. The authorities say the country loses some 150,000 hectares of forest annually, but environmental organisations put the figure above 300,000 hectares a year.

Forests form part of the territory in 2,300 ejidos and other communities, 600 of which run forestry companies, according to the non-governmental Mexican Council for Sustainable Forestry (CCMSS).

This country of 112 million people emits an estimated 709 million tons a year of carbon dioxide (CO2), one of the main greenhouse gases responsible for global warming. Of that total, 16 percent comes from agriculture and deforestation

This year, the government and social organisations are designing a local version of REDD+, to submit to consultation at a regional level in 2013, with the aim of implementing it the following year.

“Sustainable techniques for the management of natural resources have been used. These models should be employed as part of REDD,” Félix López, the president of the
Union of Forest Communities and Ejidos of the southern state of Oaxaca, told IPS.

A study published in May in the Environmental Science & Policy academic journal reported that of 99 countries studied, Mexico was one of only four that had good capacity for both monitoring forest area change and performing regular forest inventories.

“Assessing capacities of non-Annex I countries for national forest monitoring in the context of REDD+”, says Mexico has a “very small capacity gap” for implementing a national REDD+ monitoring system, along with Brazil and Chile, compared to the rest of Latin America and to Africa.

The capacity gap refers to the distance between the national commitment to the programme, existing monitoring capacities, and the technologies used.

The study also found that 49 of the 99 countries had “very large capacity gaps”. In addition, it said that the countries with a small capacity gap “could have an important role in South-South capacity development.”

In Amanalco, which is home to just under 23,000 people, and whose name means “near the water” in the Nahuatl indigenous tongue, local residents have learned to create natural barriers by planting fruit trees and other plants, to keep the soil on the mountain terraces from washing away during the rainy season.

The Emiliano Zapata Union of Ejidos has received financing from sources such as the CCMSS, the Gonzalo Río Arronte Foundation of Mexico, and the U.S.-based Inter-American Foundation. These funds have enabled it to operate a sawmill that employs 23 people and processes 6,000 cubic feet (170 cubic metres) of wood a day.

The local loggers are thus no longer at the mercy of intermediaries, but sell their lumber directly to the Union’s sawmill, or to outside buyers, for better prices. Currently, they are fetching a price of 73 dollars per cubic metre.

The ejidos hope to strengthen their administration, agricultural practices, and forestry governance, all of which are central REDD+ goals.

“The owners of the resources should be able to decide whether or not to participate,” López said. “If they generate local capacities, they can access a steady flow of funds.”

The Union of Forest Communities and Ejidos of Oaxaca covers 100,000 hectares of forest, where several sustainable forestry projects are underway.

With the help of REDD+, Mexico could preserve and even increase its forested areas, and avoid an estimated 41.8 million tons of CO2 emissions while reducing the territory dedicated to agriculture and livestock, for a further reduction of 4.7 million tons.

In a report released in June, the Forest Carbon Partnership Facility (FCPF) said that one of the challenges faced by Mexico is harmonising the initiatives underway in the states while a national strategy takes shape, without curbing them, but promoting consistency and coherence between the national and subnational levels.

Mexico will be carrying out one of the eight pilot projects under the FCPF, an alliance of 28 nations, NGOs and international organisations that finances the reduction of emissions caused by deforestation and forest degradation.

One touchy issue is how to apply the strategy in sites where there are conflicts over land ownership, which number 526 across the country, according to the ministry of agrarian reform.

Another difficult aspect for communities involved in sustainable forestry management is that they are not able to access funds for combating forest degradation, because they do not face that problem.

In addition, some academics and local communities argue that REDD+ poses a risk of putting a commercial value on forests, and could endanger the autonomy of communities.