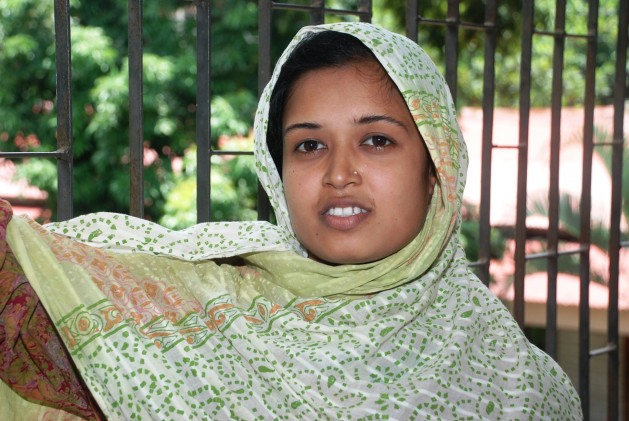 Violence against women is on the rise in Bangladesh. Credit: Naimul Haq/IPS

DHAKA, Oct 17 2012 (IPS) - Bangladesh, often cited as a model of progress in achieving the United Nations Millennium Development Goals (MDGs), appears to be sliding backwards when it comes to dealing with violence against women (VAW).

Police statistics and assessments by non-government organisations (NGOs) working to establish women’s rights show that there is in an increasing trend in VAW.

Farida Akhtar, an internationally known rights activist, told IPS that the disturbing aspect of this rising trend in VAW is that it is “taking on different deceptive forms that go beyond the statistics.”

“When women are better aware of their rights through education, and want to assert them, they suffer violence,” said Akhtar, a founder of the NGO, ‘UBINIG’, acronym for ‘Policy Research for Development Alternatives’ in the Bangla language.

With school enrolment at 95 percent, Bangladesh is well on track to achieving the MDGs that deal with gender parity in education by 2015. But gender equity and women’s empowerment are another matter.

Akhtar said there is evidence that Bangladeshi women are now facing more mental torture than before. “Unfortunately, mental torture cannot be quantified and often goes unreported. But, the fact that suicide is the biggest cause of female deaths in this country is telling.”

Women’s rights leaders say that atrocities go unreported because of fear of harassment by religious or political leaders and, of the cases that are registered, a large number end up being dismissed as false allegations.

Police data show that 109,621 complaints of various forms of VAW were lodged during the 2010-2012 (up to August) period.  Of these, 18,484 complaints were taken into cognizance, but only 6,875 cases were deemed ‘genuine’ and fit for further proceedings.

Mohammad Munirul Islam, additional inspector-general of police responsible for dealing with crimes related to VAW at the police headquarters, told IPS, “On many occasions our investigations showed that the law was used to harass the accused. It does seem that not all complaints are genuine.”

Afroza Parvin, executive director of Nari Unnayan Shakti, a women’s rights NGO, told IPS, “Due to better awareness female victims have learnt to raise their voices, but stop short of seeking police help. During our 20 years of experience on VAW we have found that police often do not cooperate with victims and favour the accused.”

Leading women’s movement activist Shireen Huq says that the main difficulty is that of “establishing a prima facie case for lack of eye witnesses, evidence, etc., with the result that the accused are easily acquitted and cases are recorded as false.”

Huq, who is also a founder member of Naripokkho, a local NGO, told IPS that “no matter what the offence or what the form of violence, police and lawyers find it convenient to file the complaint under ‘torture for dowry’, and since this is a non-bailable offence we often hear of the elderly parents of the accused being arrested.”

Failure to fulfill dowry demands is a major cause for VAW in Bangladesh. On average 5,000 complaints of dowry are recorded annually. In 2010, police reported 5,331 cases of dowry, which jumped to 7,079 in 2011.

Despites the debates, official statistics show that VAW continues unabated and many complaints are dismissed without justice. Data from Bangladesh National Women Lawyers’ Association (BNWLA) show that of the 420 recorded rape cases in 2011, only 286 reached the prosecution stage.

Salma Ali, executive director of BNWLA, told IPS that one of the difficulties in establishing the rights of women is the fact that Bangladeshi society is strongly patriarchal. “This means that women suffer discrimination in respect of matrimonial rights, guardianship of children and  inheritance – often through religious injunctions or directives,” the prominent lawyer said.

Hameeda Hossain, chairperson of Ain-o-Shalish Kendra, a leading women’s rights  organisation, told IPS that if  “women are still suffering socially, culturally and politically” it is due to “social acceptance of women’s subordination, discriminatory laws and poor law enforcement.”

“Crimes against women within the family are often ignored, and the women  silenced,” Hossain said. “There is social tolerance of domestic violence and limited intervention.”

To its credit the Bangladesh government has taken a number of legal steps to  improve the situation of women, starting with the Suppression of Violence against Women and Children Act in 2000. In 2009 the National Human Rights Act was passed followed by the Domestic Violence Act in 2010.

Bangladesh is also signatory to international conventions designed to protect women and their rights. Yet, very little is being done on the ground to ensure a secure and safe environment for them, rights activists say.