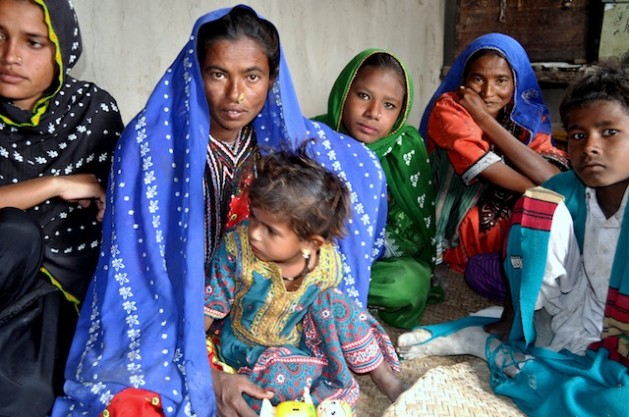 KARACHI, Nov 14 2012 (IPS) - Thirty-year-old Shahida Saleem, who was not educated past the tenth grade, is a mother of two, living with her family in Karachi. Six months ago she suffered a miscarriage and her doctor, concerned about her anaemic condition, advised her to space out her next pregnancy by taking contraceptives.

“I don’t want to have any more children; it’s difficult to bring up two in these times of rising food prices,” Saleem told IPS.

Still, she is not planning to use any modern method of birth control.

“I tried pills after my first child but I developed a cyst in my ovary, which the doctor said was due to the contraceptive,” she said, explaining why she discontinued that particular method.

Neither she nor her husband has initiated the use of condoms.

Saleem is among the estimated 222 million women who, according to the ‘State of the World Population 2012’ report, released Wednesday by the United Nations Population Fund (UNFPA), “lack access to reliable, high-quality family planning services, information and supplies, putting them at risk of unintended pregnancy”.

Overseen by the Department of Health and the Ministry of Population Welfare, the public health sector covers just 33 percent of these couples’ needs. Fifteen percent go to the private sector or non-governmental organisations for family planning services.

This leaves over 1.5 million people at the mercy of market-distributed family planning, which is often cost-prohibitive.

But as the UNFPA’s research shows, “Shortages of contraceptives are only one reason why millions of people are still unable to exercise their right to family planning. Access to family planning may also be restricted by forces including poverty, negative social pressures, gender inequality and discrimination.”

A highly conservative mindset still dominates huge swathes of Pakistani society. The latest Pakistan Demographic and Health Survey (PDHS), tracking data from 2006 to 2007, states, “Many Pakistani women and men regard continuing contraceptive practices more threatening to their health than an occasional induced abortion.”

“We keep talking about unmet need; but having worked with women for many years, I have come to the conclusion that a lot has got to do with the mindset. No amount of contraception supplies in population welfare centres will help if the women are not convinced to use them,” Dr. Arjumand Rabbani of the Midwifery Association of Pakistan, told IPS.

Dr. Talat Rizvi, a leading medical practitioner, stressed that maternal health indicators will only improve if female education and economic empowerment are given due attention.

Zulfikar Bhutta, head of women and child health at the Aga Khan University in Karachi, is sceptical about Pakistan’s ability to achieve the fourth and fifth Millennium Development Goals (MDGs) of improving child health and reducing maternal mortality.

“Pakistan has failed to make substantive progress towards (achieving) the MDGs for health and has fallen way behind most countries in the region including Nepal and Bangladesh,” Bhutta, who is part of the seven-member independent Expert Review Group (iERG) for maternal and child health for the U.N. Secretary General, told IPS.

“Even northern Afghanistan seems to have made more rapid progress in recent years. The reasons for this lack of progress are manifold, including lack of political will to address maternal and child health, unbridled population growth, poor governance and accountability.

“Social determinants of health such as female education and empowerment, poverty alleviation and under-nutrition have received scant attention,” he lamented.

The situation is complicated by the population boom in the country.

On average, Pakistani women have four children. With almost 84 percent of women not using any form of modern birth control, keeping Pakistan’s population at a manageable level is a massive task.

If current trends continue, by the year 2020 the country’s population will reach 200 million.

“Any delay in addressing the issue of millions of uneducated and unemployed youth will lead to a disaster of unprecedented proportions in the near future,” Dr. Farid Midhet, a demographer and founder of the Safe Motherhood Alliance in Pakistan, told IPS.

The programme began in 1994, when government-trained medical professionals went door-to-door delivering temporary supplies of condoms, injections and birth-control pills, as well as other basic health needs.

If the programme hopes to reach the entire population of 180 million, 60 percent of which lives in rural areas, the country needs to double the number of workers to 180,000, health experts say.

“The health sector has failed to implement even one programme properly, with the exception of the LHW programme,” Bhutta said.

But in recent years, the programme has been undergoing a shift, with lady health workers increasingly tasked with managing other campaigns for tuberculosis, malaria and polio, which have eaten up much of their time and energy.

“I think if LHWs revert back to their original job description, they can do wonders with regards to both family planning and prenatal care,” Midhet said.

“They are discrete, known to the women, easily accessible and (able to provide) advice and support when women first start using a pill or injection,” he pointed out.

However, he hastened to add that other factors must improve simultaneously, such as salaries. The women must be “allowed the space to work independently of all political interference.”