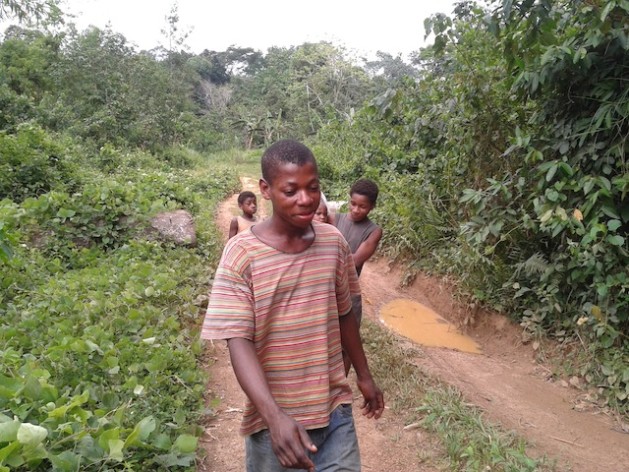 YAOUNDÉ, Apr 25 2013 (IPS) - Bordered by a rubber plantation in the west, a forestry plantation in the east and a palm oil farm in the south, the 18 local communities that live in Ocean Division, southern Cameroon, have had an uphill struggle for the rights to their land.

In 2008, the government leased much of their forestland, about 47,000 hectares, to international company United Forest Cameroon.

But only through a sustained campaign and involvement by the Rights and Resources Initiative (RRI), a global coalition of organisations working to encourage forestland tenure, the communities were given back some of their land by a February 2012 prime ministerial decree.

Biang Marcelin is the chief of Adjab, one of the villages in Ocean Division. He told IPS that despite the turnaround by the government, the land given back to the community was not sufficient.

“This land was given for use to all 18 villages of this region, which has a total population of about 7,000 people. We asked for 17,000 hectares, but got 13,922 hectares.” Because the communities could not prove ownership of all 47,000 hectares, they had negotiated for the return of 17,000 hectares.

But the story of these communities testifies to the precarious nature of local communities’ land rights in Africa.

“Africa is indeed in a pivotal historic moment regarding who owns the land and, by extension, who owns Africa,” Andy White, the coordinator of RRI, told IPS.

Studies carried out by RRI show that, compared to other continents, Africa lags far behind with regard to meeting the main conditions for securing community tenure rights.

Less than 12 percent of laws recognising community and indigenous peoples land rights in Africa are adequate.

Governments in Africa own and manage 97.9 percent of forestland compared to 36.1 percent government ownership in Latin America and 67.8 percent in Asia.

Since 2009, the RRI has been working in West and Central Africa to stop landgrabbing and land allocations that do not serve a genuine public interest.

The group has also attempted to urge governments to legally recognise the rights of the rural poor, and to push for more equitable models that give forest communities a number of rights, including access to and usage of forest resources.

But only 13 countries out of the 24 in the two regions have undertaken appreciable efforts towards land tenure reforms.

“Some 13 countries have developed statutory tenure instruments. These include tools to formally establish new community rights, and to secure or strengthen existing rights.

In East Africa, countries like Tanzania and Uganda have demonstrated a strong commitment to improving governance and curbing corruption by recognising both customary laws and community land rights.

According to Felician Kilahama, Tanzanian chairperson of the United Nations Food and Agriculture Organization committee on Forestry: “In Tanzania, where wildlife and fishery resources are found on community land, a village land act, which empowers that village to own that land, is issued by the national commission of land.”

“The land title is given to the village, and the village government or council with 25 members is in charge of overseeing that all resources are for the village and must benefit them,” Kilahama told IPS.

“Land governance in Uganda has changed; the state invested land in the citizens of Uganda instead of investing in itself. The state has 10 percent ownership of the land. What the government does is play the regulatory and control role over the land,” Nsamba told IPS.

In 1998, Uganda recognised customary and traditional ownership of land. It is estimated that some 80 percent of land in the country is owned in this way.

But these are far from perfect models.

“Wherever the reforms took place in West and Central African countries since 2009, it didn’t cover a whole bundle of rights,” Michael Richards, a natural resource economist with NGO Forest Trends, told IPS.

“The reforms that took place usually cover what appears to be a weaker and mostly revocable set of rights (access, usage, management, and extraction rights) but not ownership rights.”

The challenges that African countries face are steep and progress is slow, Phil René Oyono, an independent expert on natural resources, told IPS.

“In Gabon for example, the new land laws passed in 2012 revise the structure of land tenure rights mainly to provide a more flexible regime for commercial transaction on the land,” he said.

While governance of forest resources in Africa is plagued by serious conflicting choices, the flow of foreign capital into the continent is ever tempting.

In Liberia, for example, the Community Rights Law of 2009 was lauded as a major innovation because it recognised customary ownership of land.

But in 2012, the government negotiated a large-scale land acquisition with Malaysian-run Sime Darby and Indonesian Golden Veroleum. The companies were given about 220,000 hectares each of land – a significant portion of the country’s land. It rendered locals’ rights moot before they were implemented, Alfred Lahai, director of Green Advocates Liberia, told IPS.

White said that government structures across West and Central Africa were now “in a bind and divided, with some ministries choosing to hand over natural resources to agribusinesses and mining, and others seeking to protect the rights of their citizens.”