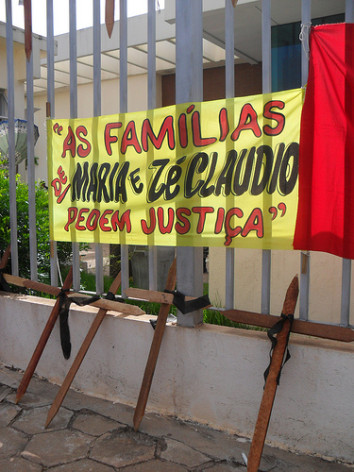 A sign put up by activists in Marabá, Brazil demands justice for the murders of Amazon activists José Cláudio Ribeiro da Silva and Maria do Espírito Santo. Credit: Fabíola Ortiz/IPS

MARABÁ, Brazil , Apr 5 2013 (IPS) - Peasants and human rights defenders in Brazil are indignant over the acquittal of the man accused of ordering the May 2011 murders of two prominent Amazon activists, José Cláudio Ribeiro da Silva and his wife Maria do Espírito Santo.

The trial ended Thursday Apr. 4 with the sentencing of two men paid to kill the couple in the Amazon jungle state of Pará. But the third man held for the crime, the landowner accused by the prosecutors of hiring the other two, was absolved on the grounds of insufficient evidence.

The trial was one of the six slated to take place this year in Brazil involving land conflicts, one of the main causes of violence in South America’s giant.

In the trial, which lasted 48 hours with only a few breaks, a seven-person jury found Alberto Lopes do Nascimento and Lindonjonson Silva Rocha guilty. They were given sentences of 45 years and 42 years and eight months, respectively, on two counts of aggravated murder and cruelty.

Da Silva, 54, and his wife Maria do Espírito Santo, 53, were riding a motorcycle when they were ambushed and gunned down in the rainforest in the northern state of Pará on May 24, 2011. The killers cut off a dying da Silva’s ear.

The murders “used methods that made it impossible for José Cláudio and Maria, killed in a cruel ambush…to defend themselves,” reads the sentence handed down by Judge Murilo Lemos Simão, which goes on to state that the motive was a dispute over land, described as an aggravating element.

But José Rodrigues Moreira, who was accused of masterminding the murders, was acquitted because there were “no concrete elements” proving his guilt, according to the judge. Prosecutors were seeking a 70-year sentence for the landowner.

The trial, attended by the delegates of dozens of national and international social movements and human rights groups, took place in the city of Marabá, in the southeast of Pará, the state that has the largest number of land disputes in Brazil.

Nearly 200 people held a vigil outside the courthouse, next to the Trans-Amazonian highway. When the sentences were read out, activists and rural workers burned crosses and threw stones at the courthouse windows.

“The verdict is more of the same, from Brazil’s justice system: it condemns those who are at one tip of the murder and acquits those who had the motives to commit it,” the head of the Brazilian NGO Terra de Direitos, Antônio Escrivão Filho, told IPS.

Da Silva, known as “Zé Castanha”, and his wife were community leaders and environmentalists involved in a project for sustainable agriculture and the gathering of rainforest fruits in the remote settlement of Praia Alta Piranheira, 500 km from Belém, the state capital.

Since 2005, the couple had been battling the illegal occupation of land on the 22,000-hectare settlement by loggers and charcoal producers. In Praia Alta Piranheira, the trees have been cut on 75 percent of the land.

The catalyst for the murders was the illegal purchase by Rodrigues of a 150-hectare plot in the area where the Praia Alta Piranheira project was being carried out.

Three families lived on half of the lot. Rodrigues tried to evict them, but failed, thanks to the support they received from Zé Castanha and his wife.

In reprisal, Rodrigues decided to hire gunmen to murder them, according to the prosecution. After the two community leaders were killed, the intimidation against the three families continued, and given the lack of police protection, they finally abandoned the land.

The prosecutor, Danyllo Pompeu Collares, announced that he would appeal the verdict.

“Society is not yet prepared to put the blame on the person responsible (for the killings) for fear of his economic power and political influence,” said the prosecutor. “The rest of the family (of the two victims) will continue to be under threat as long as (Rodrigues) is free.”

The south and southeast of Pará is one of the most violent parts of Brazil, in terms of deadly land conflicts. According to the Catholic Pastoral Land Commission (CPT), of 1,645 murders related to land disputes committed since 1985, just 100 went to trial, and in only 22 of those cases was the person accused of masterminding the killings found guilty.

“The justice system in Pará is very conservative,” Marabá Mayor João Salame, who took office this year, told IPS. “I wanted a guilty verdict; any light sentence would be an incentive for hired killings. The punishment has to be stiff.”

Atila Roque, executive director of Amnesty International Brazil, told IPS that “the couple had a history of defending the law and working to pacify the conflict. The state played a role of complete omission…it is shocking and shameful.”

The 200 activists who came to Marabá to stand vigil outside the courthouse starting at 5:00 AM the first day included representatives of Amnesty, Brazil’s National Human Rights Movement, and the foundation that grants the Right Livelihood Award, better known as the Alternative Nobel Prize.

During the trial, activists and local small farmers set up an altar outside the building, with a photo of the victims and offerings of cashews.

“They defended the jungle,” said Maria do Espírito Santo’s brother-in-law, José Sampaio, who was the first to testify at the trial. “In this region there are many ranchers, loggers, charcoal producers and farmers who have settled on land. The couple were ‘agro-extractivists’ and lived off the rainforest.”

According to Laísa Sampaio, his wife and Maria’s sister, the couple had received death threats since 2001.

“They denounced crimes, the charcoal makers and loggers, and illegal occupation of land, and were carrying out an educational process to show people that it was possible to make a living from the jungle,” said Laísa, who also received threats and was forced off the land where she was living.

According to José Batista of the CPT, who assisted the prosecution, abundant physical evidence was gathered by the police, such as strands of hair found in a diving mask that was used in the murder and which, by means of DNA testing, made it possible to determine that it belonged to one of the two murderers.

“The conviction was a sure thing based on the existing evidence, which was compelling and gave us the certainty that the jurors would hand back a guilty sentence,” Batista told IPS.

Despite his health problems, 82-year-old French Dominican friar Henri des Roziers, a CPT lawyer in Pará who is known locally as Frei Henri, made it a point to attend the trial.

He said the case was similar to that of the assassination of legendary environmental activist Chico Mendes, a leader of the seringueiros or rubber tappers who was killed in 1988 in the northwest state of Acre.

“The impunity remains in place; I am leaving with a heavy heart,” Henri said.

“Extractivism and the preservation of nature are still a cause of death,” he said. “These murders were like that of Chico Mendes – the reasons were the same. These people were an irritant for the current model of agribusiness, agrotoxics and scorn for nature.”