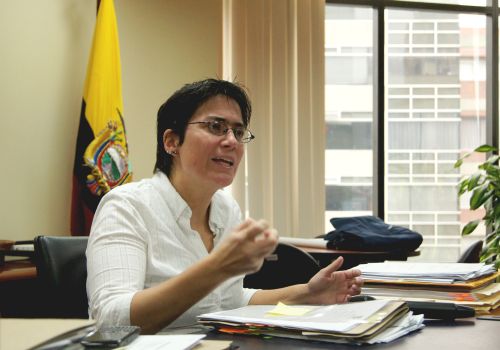 QUITO, Apr 19 2013 (IPS) - The government of Ecuador is determined to curb the growing number of teen pregnancies, and has begun to knock down barriers that stand in the way of the right to a responsible sexual and reproductive life.

The question of sexual and reproductive health has been a focus of public debate since new regulations were announced on availability and access to birth control methods, including emergency contraception known as the morning-after pill.

Making emergency contraception freely available forms part of the National Multi-Sector Strategy for Family Planning and Teen Pregnancy Prevention (ENIPLA), which has been given a budget of 4.4 million dollars.

Ecuador has the highest teen pregnancy rate in South America: 81 births per 1,000 females between the ages of 15 and 19. Seventeen percent of girls in that age group have at least one child. And the number is on the rise: according to official figures, the number of births to adolescents in that age group rose from 31,053 in 2004 to 45,708 in 2011.

The Catholic Church and other critics claim the morning-after pill is an abortifacient, even though studies show that what the pill actually does is delay ovulation.

The pill has been legally available in Ecuador since 1998, but a prescription was needed. Today it is freely available, without cost, in all public hospitals and health centres in this South American country.

Q: Why was the decision reached to make the morning-after pill freely available?

A: We have disturbing statistics with respect to family planning and the spacing of children, in terms of the number of desired children and how many people actually have.

ENIPLA, a joint programme of the ministries of education and economic and social development, has been implemented since 2011 in Ecuador, which has the highest teen pregnancy rate in South America.

Q: Is the controversy over the morning-after pill based more on moral values than on knowledge of rights?

A: We believe there is no real controversy, because there is actually wide acceptance, of ENIPLA and of the fact that the method is freely available.

We have received a favourable response from social organisations and national and international institutions involved in health and women’s rights. The great majority of opinions against (the morning-after pill) are not based on scientific information, but on a mistaken understanding.

They claim that in some cases, emergency contraception is abortive, but there is scientific evidence that it is not. And they also want parental consent in order for an adolescent to have access to birth control methods.

Q: Are young people in Ecuador mature enough to decide on their own?

A: If young people are mature enough to have sexual relations, we have the obligation to respect their right to unlimited access to the pill, without barriers or the approval of third parties. We believe in working with parents to strengthen family communication on sexuality and sexual and reproductive rights.

There are people who because of principles or religious beliefs don’t consider it appropriate to make this kind of contraceptive freely available. We completely respect that position, but we have to integrate public policies in a framework of rights, and understand that the Ecuadorean state is secular.

Q: How many health centres distribute the emergency contraception pill?

Q: With respect to the promotion of a responsible reproductive and sexual life, what efforts are needed?

A: The Health Ministry has the obligation to provide objective, science-based evidence and provide medication totally free of charge. For example, we have condom dispensers in our health units, but that’s not enough.

Multi-sectoral work is needed, which is why it is so important to work with the Education Ministry. And there is also the shared responsibility of society: conversations on sexuality and rights should not be limited to visits to health centres. We also work with the parents of young people.

We carry out an ongoing effort in prevention, attention and studies on sexually transmissible diseases and the various problems that influence their spread.

We definitely have challenges: high teen pregnancy rates; the fact that 13 percent of maternal deaths occur among adolescents between the ages of 15 and 19; and the fact that six out of 10 women overall have suffered some kind of violence: physical, psychological or sexual.

We also face big challenges in achieving an equitable society free of violence, where sexual and reproductive rights are fully respected.

Q: Does this mark a watershed in sexual and reproductive rights?

A: Use of the emergency contraception pill has been legal since March 1998. With these latest regulations, we are now guaranteeing access to the pill without a prescription, as well as adequate supplies in all public health centres and hospitals, and the exercise of the right to a birth control method without parental or partner consent, a requirement that used to be a barrier for women.

Our constitution guarantees free access to services, contraceptive methods, family planning visits, and the possibility for everyone to lead a healthy life with universal access to health care, with a central focus on primary care.

Q: How does the government plan to move forward in the struggle to consolidate sexual and reproductive rights?

A: I don’t know if I would call it a struggle. A 2011 survey found that 84 percent of respondents agreed with the free provision of birth control methods – in other words, we have a high level of acceptance, and a government that is totally committed to the exercise of rights, including sexual and reproductive ones.

We are going to do everything necessary to implement sustainable policies, to make sure there is no backsliding.