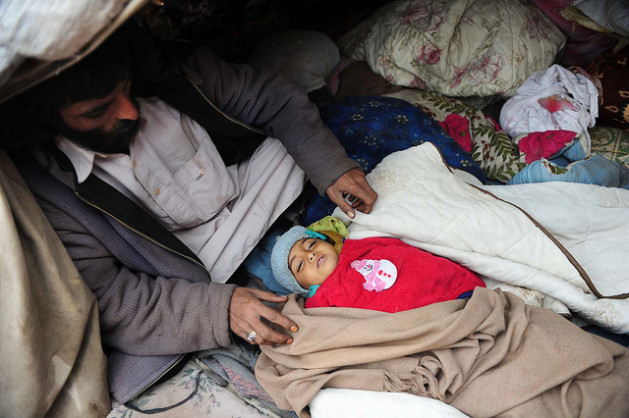 UNICEF estimates that 3.5 million children in Pakistan suffer from acute malnutrition. The EU is helping the government to cut down the malnourishment rate by 25 percent by the year 2015. Credit: Ashfaq Yusufzai/IPS

WASHINGTON, May 29 2013 (IPS) - In addition to the serious health problems it causes, child malnutrition is costing the global economy tens of billions of dollars a year by depriving its victims of the ability to learn basic skills, according to a new report released Tuesday by Save the Children (STC).

Based on a multi-year study in four countries, the 23-page report found that chronically malnourished children – about one of every four children born today — are significantly less able to read, write a simple sentence, or perform basic arithmetic.

Those disabilities, as well as other cognitive problems related to malnutrition, translate into a 20-percent reduction in their average adult earnings, which in turn acts as an important brake on economic growth in the countries where they live, according to the report.

The report, “Food for Thought: Tackling Child Malnutrition to Unlock Potential and Boost Prosperity”, estimated the global impact of child malnutrition at 125 billion dollars a year by the time today’s children reach working age in 2030.

It is urging leaders at this year’s G8 Summit, which takes place in Northern Ireland in 10 days, to take strong action, including substantially increasing donor funding, to tackle the problem.

“Poor nutrition in the early years is driving a literacy and numeracy crisis in developing countries and is also a huge barrier to further progress in tackling child deaths,” said Carolyn Miles, STC’s president.

“Improving the nutritional status of children and women in the crucial 1,000-day window – from the start of a woman’s pregnancy until her child’s second birthday – could greatly increase children’s ability to learn and to earn,” she noted. “World leaders must commit to concrete actions to tackle malnutrition in those critical 1,000 days, and invest in the future of our children.”

According to 2012 figures compiled by the U.N., nearly half of children under five in southern Asia and 39 percent of the same age group in sub-Saharan Africa are stunted – that is, too short for their age due to poor nutrition. With more than 60 million stunted children, India is among the most hard-hit countries, as is Nigeria, with nearly 11 million stunted children.

Malnutrition, according to the report, threatens to undermine the impressive gains in reducing child mortality and increasing primary-school enrolment that have been made in the past two decades as the world has moved closer to fulfilling the U.N.’s Millennium Development Goals (MDGs) by 2015.

Between 1990 and 2011, the numbers of children dying under the age of five fell from 12 million to 6.9 million. But malnutrition remains an underlying cause of 2.3 million children’s deaths each year, according to STC.

And, while the number of children in primary school rose by more than 40 million between 1999 and 2011 – an increase of some 32 percent – the cognitive disabilities caused by chronic malnutrition have left millions of children unable to learn some of the most rudimentary tasks of a basic education.

The study, the first to try to identify the impact of malnutrition on educational outcomes across a range of countries, included some 3,000 children in four countries – Ethiopia, India, Peru, and Vietnam – over nearly two decades. The subjects were interviewed and tested to determine their educational abilities, confidence, and aspirations at various points in their lives.

It found that children who are malnourished in the first 1,000 days of their lives – from the start of a woman’s pregnancy until their second birthday – suffer substantial learning disabilities compared to those with healthy diets.

In addition, malnourished children tend to be less confident about learning and about their ability to change their situation for the better, according to the studies on which the report was based.

The report found that children were malnourished go on to earn 20 percent less as adults than children who were well nourished, although it found evidence that the gap could be larger.

It also noted that some of the earnings differential could be explained by the relatively smaller size of many adults who were malnourished as children, particularly if their work requires physical strength, including agriculture and other manual labour.

“This report adds to the mounting evidence that malnutrition takes a toll not only on children’s bodies, but also on their ability to earn an education, make a living and rise out of poverty,” said Lucy Sullivan, director of 1,000 Days, a partnership co-founded by former U.S. Secretary of State Hillary Clinton, then-Irish Foreign Minister Micheal Martin, among others, in September 2010 that promotes investments to improve nutrition for mothers and children from pregnancy to age two.

“Malnutrition’s price tag is steep: it costs the global economy 125 billion dollars per year. What the report drives home, however, is that malnutrition is preventable and solvable,” she added.

Despite the fact that the World Bank concluded in a major 2006 study that improving nutrition of mothers and small children was among the most cost-effective interventions in promoting development, the donor community has spent an average of only 0.37 percent of total aid on nutrition over the past three years, in part because the issue often falls through the cracks between the ministries of health and agriculture.

On Jun. 8, however, the British and Brazilian governments will co-host the first-ever nutrition pledging conference at the G8 summit, called “Nutrition for Growth”.

The report is calling on donors to more than double their commitments to spending on nutrition programmes to one billion dollars a year and for national governments to establish plans and targets for reducing malnutrition over the next decade.