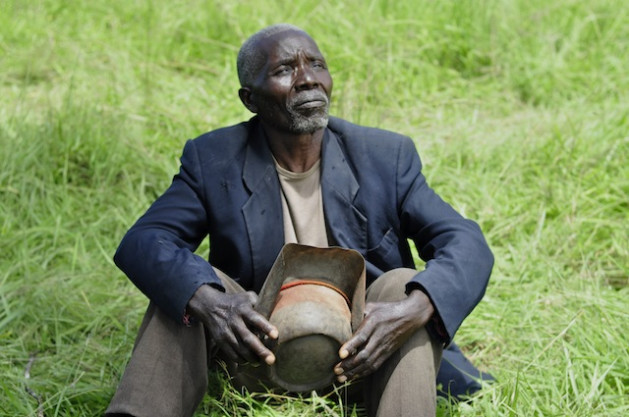 Gabriel Seltoc trekked for three weeks, barefoot, from the DRC after soldiers started shooting inside his house. He fled wearing his precious seven-year-old cowboy hat, a navy jacket, beige t-shirt, and brown trousers, which he bought at a market four years ago. Courtesy: UNHCR/Lucy Beck

RWAMWANJA REFUGEE CAMP, Uganda, Jul 1 2013 (IPS) - If you were forced to flee your home to survive, what would you take? What could you take? Jean Claude “Van Damme” Ndongizimana, 20, escaped from the eastern Democratic Republic of Congo with just the bag in which he kept his profits from selling milk and the clothes on his back.

He was forced to flee after M23 rebels fighting government troops attacked his village and attempted to recruit him two months ago. He eventually found his way to the Rwamwanja refugee camp in Kamwenge district, southwestern Uganda, which is currently home to more than 40,000 Congolese refugees.

The youth is one of nine refugees featured in a new photography exhibition being run by the United Nations Refugee Agency (UNHCR). The photos show the refugees and the possessions they took with them when they fled their homes.

In his photo Ndongizimana sits on the grass with his black bag around his neck. In another shot, Florence Mukeshimana, 30, poses with her five young children and the old saucepan she grabbed before fleeing her home after her husband was blown up by a landmine. “When I found out my husband was dead I lost hope and decided to leave the country,” Mukeshimana says.

The images were unveiled over a week ago and will go on display at the Mish Mash Restaurant and Art Gallery in Kampala on Jul. 2.  The exhibition will run for three weeks and hopes to draw attention to the thousands of people around the globe forced to escape war or persecution every day.

“After 20 years of fighting, a latent fatigue with the unceasing plight of eastern Congo means there is not enough funding to meet the needs of more than 900,000 people living in camps in North Kivu.” -- Oxfam International’s Humanitarian programme coordinator for the DRC, Tariq Rieb.

During his interview with IPS, Ndongizimana wears a blue raincoat, oversized brown trousers, and lace up sneakers with tattered soles – the ones he was wearing when he left his country two months ago.  His beloved plaid cap rests on his head and displays a sticker of Arsenal football player Bacary Sagna, acquired from a chewing gum packet after Ndongizimana crossed the border into neighbouring Uganda.

“I love football here,” Ndongizimana, who has been known to kick a ball around Rwamwanja, tells IPS.

According to UNHCR, the security situation in eastern DRC has been precarious since July 2011, causing regular influxes of refugees into Uganda.

Fresh fighting between M23, an armed group started by former Tutsi soldiers who mutinied in April 2012, the DRC army, and other local armed groups, has uprooted thousands more. According to the UNHCR, almost 70,000 people were forced to flee to neighbouring Uganda, and some 2.2 million were displaced internally. Rwamwanja was reopened in 2012 by Uganda to accommodate new arrivals.

In May, hundreds of Congolese crossed the border to avoid being forcibly conscripted into M23’s ranks, according to the UNHCR. It took Ndongizimana three weeks to make the journey.

Ndongizimana now fears the worst about his parents and siblings back home and says he wants to stay in Uganda.

“If I can learn how to box, I can support myself in the future,” he says. “I will only go home if we have peace.”

Last month South Africa began deploying troops to Goma, a city in eastern DRC, to reinforce the Tanzanian and Malawian contingent that will form the U.N. Intervention Brigade. On Mar. 28, the U.N. Security Council resolved to move its presence in the DRC from a stabilisation and peace-keeping force to an intervention one. The 3,000-strong force should be fully operational by the middle of July.

“The situation will certainly evolve once the brigade is fully operational,” head of the UNHCR office in Goma, Kouassi Lazare Etien, tells IPS.

“If the brigade intervenes against M23 we can expect a deterioration of the security situation in the Masisi and Rutshuru territories (in North Kivu province), which could lead to further population movements towards Uganda.”

As World Refugee Day was being celebrated in Rwamwanja on Jun. 20, the DRC’s government deployed hundreds of soldiers and tanks along the frontier with M23, indicating they may want to attack rebel positions.

Peace talks have been unsuccessfully staged in Kampala, under the auspices of the chairperson of the International Conference on the Great Lakes Region, Ugandan President Yoweri Museveni.

“If they fail to reach an agreement and in case the intervention brigade launches attacks against the armed groups, especially M23, one can expect a huge influx of population into Uganda,” says Etien.

Oxfam International’s Humanitarian programme coordinator for the DRC, Tariq Riebl, tells IPS that fighting across several North Kivu territories is forcing people from their homes every week, and the ongoing violence often makes it difficult for agencies to reach those in need.

“After 20 years of fighting, a latent fatigue with the unceasing plight of eastern Congo means there is not enough funding to meet the needs of more than 900,000 people living in camps in North Kivu,” he says.

Gabriel Seltoc trekked for three weeks, barefoot, from the DRC after soldiers started shooting inside his house. The 75-year-old, who is also featured in the exhibition, made a living back home as a traditional dancer.

Seltoc began the journey to Uganda with his wife and two children, but was separated from them along the way. Now he spends his days alone. He fled the DRC wearing his precious seven-year-old cowboy hat, a navy jacket, beige t-shirt, and brown trousers, which he bought at a market four years ago. He is featured in the exhibition in his cowboy hat.

“The war started when I was putting on these clothes one day,” says Seltoc. “They took all my things. They took my clothes, my cows, my house. Nothing is there. I can’t go back. For what? I have nothing to start (rebuilding with).”