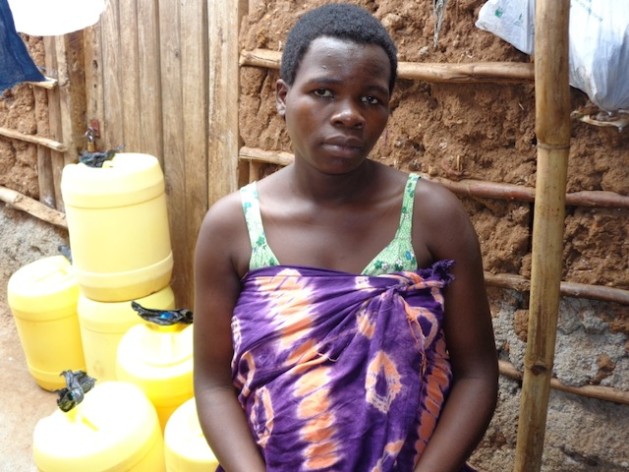 Beatrice Mudachi does not like delivering in hospital because she says her first baby was neglected by hospital staff. Courtesy: Miriam Gathigah

NAIROBI , Jul 9 2013 (IPS) - It has been a month since the Kenyan government waived the maternity fee at public health facilities, but Millicent Awino is still one of the many expectant mothers in favour of a home birth.

“During childbirth my uterus comes out, a traditional birth attendant has the knowledge of how to push the uterus back into position, unlike at the hospital,” Awino tells IPS.

Alice Anyango, a traditional birth attendant from Nairobi’s Mathare slums, tells IPS: “The uterus should not be touched with hands as they do in hospital, hence damaging it. One should throw a pitcher of cold water at it and it will retreat back to position.”

But her treatment is not medically sound. Professor Joseph Karanja, a gynaecologist and obstetrician, dismisses the treatment. “Indeed there are cases where … the uterus can come out and it is a very serious situation.

“But medically, the uterus is simply pushed back to its position with hands,” he explains.

Until now, Kenyan mothers had to pay anything from 12 dollars in rural clinics to 90 dollars in local hospitals for maternity care. If a woman had a caesarean section, it cost 150 dollars. But these fees were scrapped on Jun. 1 and hospitals, health centres and clinics across this East African nation are offering maternity services free of charge.

But according to Teresia Wangai, a qualified midwife at a regional hospital, the fee waiver has not led to an increase in women giving birth at hospitals.

“We expected to receive more expectant mothers, but I have delivered fewer babies this month. Many women seem to have stayed clear of government health facilities for fear that the fee waiver will worsen the quality of health care,” she tells IPS.

While medical doctors like Dr. Joachim Osur believe that scrapping the maternity fee is a step in the right direction, myths and misconceptions still held by mothers like Awino continue to influence their decision to use traditional birth attendants and deliver at home.

“The World Health Organization does not recommend that traditional birth attendants assist in delivery. In fact, a woman is more at risk of dying at the hands of a traditional midwife than if nobody was attending to her,” Osur, a reproductive health speacialist, tells IPS.

He says that while up to 92 percent of expectant mothers in Kenya attend antenatal care, more than half of them do not deliver in hospitals.

“When only about 46 percent of expectant mothers are delivering in hospital, the risk of death as a result of a pregnancy will remain high,” he says.

“In some regions such as Kenya’s Nyanza and Western provinces, about 75 percent of women do not deliver in hospital,” he says.

Karanja says that every country that has been able to reduce its maternal mortality rate has done so primarily by ensuring that expectant mothers deliver in the care of skilled health attendants.

“Maternal mortality seems to be on the rise, the 2008/2009 Kenya Demographic and Health Survey shows that maternal mortality rose from 414 deaths per every 100,000 live births to 488,” Karanja says.

Acting senior director in the Ministry of Medical Services, Dr. Simon Mueke, says the country’s maternal mortality rate is currently closer to 500 deaths per 100,000 live births. In fact, Kenya’s maternal mortality rate is higher than the rate in one of the most troubled countries in the world. According to figures from the World Bank, war-torn Afghanistan recorded 460 deaths per 100,000 live births in 2010.

Aside from its high maternal mortality rate, Kenya has not managed to lower new HIV infections among children by 50 percent since 2009, according to a report released in June by the United States President’s Emergency Plan for AIDS Relief, the United Nations Children’s Fund and the Joint United Nations Programme on HIV/AIDS.

Government statistics show that in Kenya at least one in five babies born to HIV-infected mothers also have the virus.

“Delivering in hospital is very significant, precautions can be taken to prevent mother-to-child transmission of HIV,” says Karanja.

Karanja adds that traditional midwives are also placing themselves at risk of contracting HIV “since they often do not have the necessary supplies required during delivery, not even gloves.”

But Angelas Munani, a traditional birth attendant, is not oblivious to this risk. “We wear two polythene bags and tie a string around the wrist to avoid coming into contact with a mother’s blood during delivery,” she tells IPS.

But myths and misconceptions, as well as the lure of traditional birth attendants’ supposed knowledge, are not the only reasons why expectant mothers shun hospital delivery.

“Usually we have about three infants sharing a bed in the maternity ward. Mothers give their beds to their infants while they sit or sleep on the floor. That is a nightmare for a woman who has just delivered,” Wangai says of the lack of facilities.

One mother, Evelyn Bosibori, adds that women in public hospitals are either neglected by nurses or are attended to by medical trainees. “At almost 5.4 kgs, my baby was not only too big for a normal delivery, but the baby came out with its legs first,” she tells IPS.

“I delivered in a government hospital with a medical trainee who could not tell that the baby had not turned properly for delivery. I should have delivered by caesarian section, my baby was almost twice the size of a new baby,” she says.

“The entire health system requires an overhaul. Strikes have occurred on and off with health workers demanding better pay and better working conditions,” he says.

“Health facilities are generally understaffed and in some regions, particularly in rural areas, you will find three or four nurses attending to children and the general public while at the same time delivering babies.”

While the maternity fee waiver is a progressive step, more needs to be done to care for Kenya’s expectant mothers. “Health facilities require more staff, and to be provided with the necessary drugs and equipment,” Osur says.