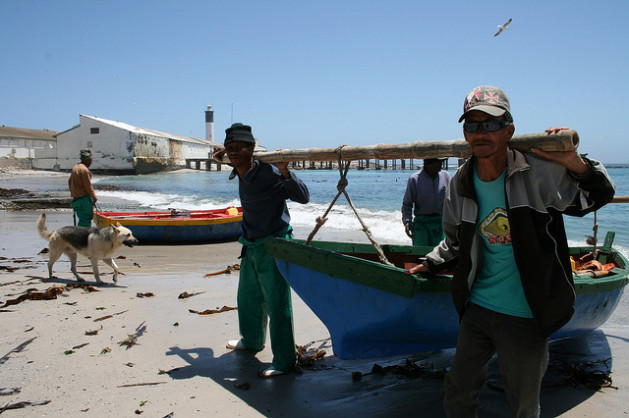 Fisheries contribute at least 10 billion dollars to African economies every year and in Angola and Namibia they are vital economic drivers. Fishermen carry their boat in from the sea in Doring Bay, 350km north of Cape Town. Credit: Patrick Burnett/IPS

WINDHOEK, Jul 19 2013 (IPS) - Southern Africa has to settle in for another round of negotiations after talks on Economic Partnership Agreements failed to produce results in June, bringing countries closer to losing access to the lucrative European Union market.

A high-level visit to the region by EU Trade Commissioner Karel de Gught this week highlighted there are still many differences.

The troublesome trade negotiations between the EU and the Southern African Development Community (SADC)–EPA grouping that includes Botswana, Lesotho, Namibia and Swaziland (BLNS), as well as Angola, Mozambique and South Africa, have stretched five years past their 2008 deadline.

South Africa joined the negotiations two years back and is looking to improve the terms it has under the Trade and Development Cooperation Agreement, especially for agricultural products.

For the BLNS, which import about 80 percent of their trade from the continent’s economic powerhouse and are joined with Pretoria in the Southern African Customs Union (SACU), the entry of South Africa on the scene presents dilemmas, as well as opportunities for further negotiation and regional economic integration.

As the two economic heavyweights – South Africa and the EU – face it off, the smaller countries are stuck in the middle. From Jun. 14 to 21 senior officials talked in Brussels about clinching the long-awaited trade deal, but little progress was made.

“Basically we are where we were last year, nothing has changed in Brussels that would close the deal,” commented Rejoice Karita, senior trade advisor at the Agricultural Trade Forum, a Namibian company representing  the agricultural industry.

An impasse in the trade talks occurred between the EU and South Africa when the former indicated that the South Africans had not offered enough in terms of agricultural market access. The EU had requested market access for 67 tariff lines, but South Africa only conceded on 20 lines and put tariff rate quotas on some of them. According to negotiators, the EU responded that the offer fell short of closing the gaps in market access regulations and they needed to see improvement.

This stalemate jeopardises the discussion on agricultural safeguards, which are extremely important for the smaller economies in the region. Such safeguards allow countries to increase duties or put in place quotas if a sudden surge in imports threatens local agricultural production. The EU will need to see concessions on South African market access to give the green light for agricultural safeguards. But both parties are unwilling to move, with the South Africans keen to protect their dairy industry and processed products such as ham and confectionaries.

According to Karita, the next round of talks in September and October will be crucial. “The two blocs have strong positions and there is little movement forward. From the side of the European Commission new articles are being added to the text. Such negotiation tactics delay the process and eventually Namibia could be the odd one out,” she told IPS.

A major stumbling block is the issue of export taxes. Facing competition from China, the EU is eager to lock in raw materials, but the developing economies of Southern Africa want to be able to impose taxes to divert exports for local value addition and developing of the local economy. 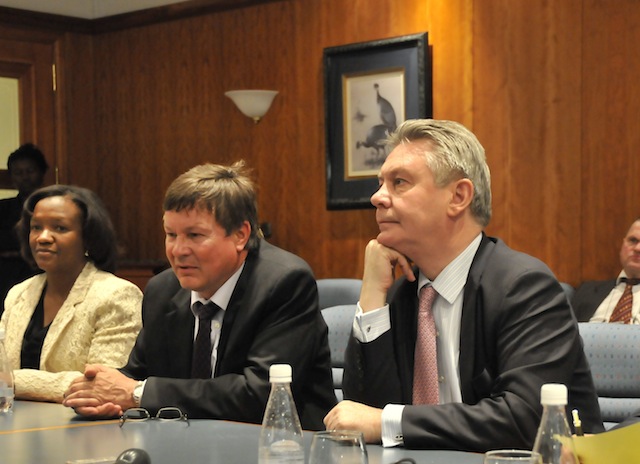 De Gught told IPS during a visit to the Namibian capital, Windhoek, that the matter of export taxes is almost resolved with only industrial export taxes outstanding. But Namibian negotiator Permanent Secretary Dr. Malan Lindeque said the issue cannot be merely ‘brushed aside’.

“Export taxes are a crucial issue for Namibia. We are primarily exporters of raw materials and need to reverse that situation. It’s crucial we move toward more explicit provisions on export taxes that meet our needs,” Lindeque told IPS.

Lindeque lamented an October 2014 deadline Europe imposed on the talks, after which Namibia will lose preferential market access.

“Because of this unfortunate deadline some circumstances cannot be properly accommodated in the talks. Still, we will only sign an agreement that is in our long term interest.”

He also warned that increased access of European agricultural goods into South Africa plays out in the Namibian market through the Southern African Customs Union.

“Already European products are extremely competitors. It is cheaper to import basic foodstuffs from Europe than to produce them locally. It is always an uphill battle for our producers to get their products on the local shelves let alone export them into the region,” he said.

In trying to reassert its grip on Southern Africa, Europe is trying to find the right tone. But the talks remain riddled with paranoia and accusations and the visit of De Gught made it clear that many stumbling blocks remain.

The latest round of talks in June were preceded by a courtesy call to Namibia by the Angel Carro, head of division for Southern Africa in the European External Action Service. The visit backfired somewhat as Carro, who came to extend the hand of friendship, was unceremoniously, and perhaps unfairly, labelled a “euro thug” by commentators when conceding in an interview that aid to Namibia would be reduced on the basis of its growing economy and upper middle-income status. In 2011 the World Bank reclassified Namibia as a middle-income country as its per capita income is 4,700 dollars. World Bank figures show that growth reached 4.9 percent in 2012.

The status of the former colonial masters has been dented in the region since the Eurozone crisis and some of the countries negotiating in the SADC–EPA, most notably Botswana, are faring much better than a couple of the EU member states.

On the other hand, growth in South Africa is stalling, coming in at a modest 2.5 percent last year, half that of Namibia. With a weakening exchange rate and investors shunning the country, because of labour unrest and political uncertainty, South Africa is painfully reminded it is still a deal-taker in the global economy and does not yet set the agenda for the continent.