Plans to reopen a road that would allow tourists to reach world-famous Iguazu Falls without going through neighbouring Argentina have ignited a new conflict between environmentalists and authorities in Brazil. 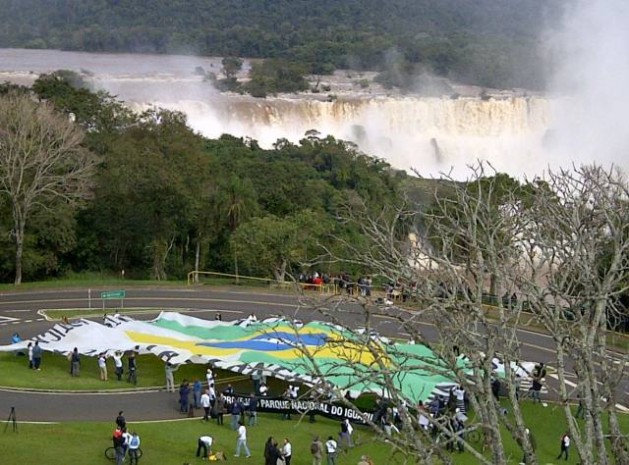 A demonstration against the reopening of the highway in Iguaçu National Park. Credit: Courtesy of SOS Mata Atlântica

RIO DE JANEIRO, Aug 13 2013 (IPS) - Environmental groups have appealed to UNESCO to help stop the reopening of Caminho do Colono, a stretch of highway in southern Brazil that crosses through Iguaçu National Park, declared a World Heritage site by the UN agency in 1986.

Hydroelectric dams in the Amazon, amendments to the Forest Code, agrarian reform conflicts: over recent years, the Brazilian public has witnessed a succession of controversies pitting environmental organisations against the country’s authorities.

The most recent conflict involves the Caminho do Colono or “Settler’s Road”, a stretch of highway in the southern state of Paraná that has been closed for over a decade, but could be reopened if a bill currently under study in the Senate is passed. The bill was fast-tracked straight to the Senate following approval by a commission in the Chamber of Deputies, without full discussion in the lower house as a whole.

The origins of the 18-kilometre stretch of highway date back to 1925, when local communities used it as an informal road and for the transport of the “yerba mate” harvested in the region. (Yerba mate is a plant used to prepare a tea-like infusion popular in a number of South American countries.)

Years later the road was integrated into the Brazilian highway network, forming part of Route PR-495, which connects the city of Serranópolis do Iguaçu, on the northern edge of the park, and the town of Iguiporã, in the municipality of Marechal Cândido Rondon.

In 1986 the road was closed for the first time under a management plan drawn up for Iguaçu National Park, which was created as a nature conservation area in 1939 and is home to the largest area of the Mata Atlântica or Atlantic Forest biome in southern Brazil. The closed section of highway falls entirely within the borders of the park.

It was also in 1986 that the park was designated a World Natural Heritage site by UNESCO (the United Nations Educational, Scientific and Cultural Organization). The road was later reopened illegally, but in 2001 the government declared its permanent closure.

The park is located in the westernmost part of Paraná, 17 kilometres from the centre of the city of Foz do Iguaçu and near the triple border with Argentina and Paraguay. It borders on Iguazu National Park in Argentina, with which it shares the breathtaking Iguazu Falls, a popular tourist destination that earned a spot on the list of Seven Natural Wonders compiled by the Swiss-based New7Wonders Foundation.

Lawmakers from the region have presented numerous bills to get Caminho do Colono reopened. One of them, PL 7.123/2010, drafted by federal deputy Assis do Couto of the ruling Workers’ Party, could be passed by the Senate this month.

The goal is to stimulate tourism and environmental education, and to allow tourists to get to the falls without having to go through Argentina, Couto told Tierramérica*.

The imminent Senate vote on the bill to reopen the road prompted some 1,000 Brazilian organisations to write to UNESCO and request its intervention.

“The author of the bill and its supporters claim that the highway will promote preservation, environmental education and sustainable regional development, although the impacts of highways on protected areas are widely documented and understood. Historical records do not demonstrate any positive effect of the Caminho do Colono on the local, regional, state or national economy,” the letter stresses.

Deputy Couto says that his bill provides for the control of traffic through the park and prohibits the use of the road by trucks.

“The road will not be paved, in order to maintain the permeability of the soil. Cars will not be allowed on it at night. In addition, the opening of the highway will mean a greater state presence, which will curb the current illegal harvesting of palm hearts. The police have even found camps of palm heart harvesters in the area,” he added.

According to Couto, the road will benefit local communities, but this argument does not convince the park’s director of conservation and management, biologist Apolonio Rodrigues.

“The highway is of no importance to the flow of production and the road network of the region. It is simply viewed as a shortcut for people travelling south to north, who would like to shorten the distance they need to drive by going through the park,” Rodrigues told Tierramérica.

“If we consider the importance of the park for humanity, there is no justification for opening the highway to benefit a small group of people,” he said.

Another problem highlighted by the road’s opponents is the danger it could pose for the local population of jaguars (Panthera onca), which has already shrunk by 90 percent.

It is estimated that there are barely 18 living specimens in an area where up to 180 jaguars once roamed. In fact, the species could be completely wiped out in the region in the next 80 years, according to the coordinator of the National Centre for Carnivorous Mammal Research and Conservation, Ronaldo Morato.

The Centre is a division of the Chico Mendes Institute for Biodiversity Conservation, which is responsible for the management of Iguaçu National Park.

The area “is already suffering from hunting. Urgent action is needed, and reopening the highway will not contribute to preservation,” Morato told Tierramérica.

Critics of the bill maintain that the efforts to open the road serve the interests of local soy producers, who would be provided with a shortcut for transporting their merchandise.

But Couto refutes this argument by emphasising that trucks would be prohibited. Soy producers, he says, “already have established transportation routes.”

Reopening the highway would require amending the Brazilian legislation on conservation areas in order to include the category of “parkway”. This would set a precedent for the indiscriminate opening of roads in other protected areas, warned the signatories of the letter to UNESCO, which has yet to issue a pronouncement on the matter.

Couto, for his part, believes it would remedy a void in environmental legislation, since there are already highways within the borders of other conservation areas. “One example is the Paraty-Cunha highway inside Serra da Bocaina National Park,” he said.