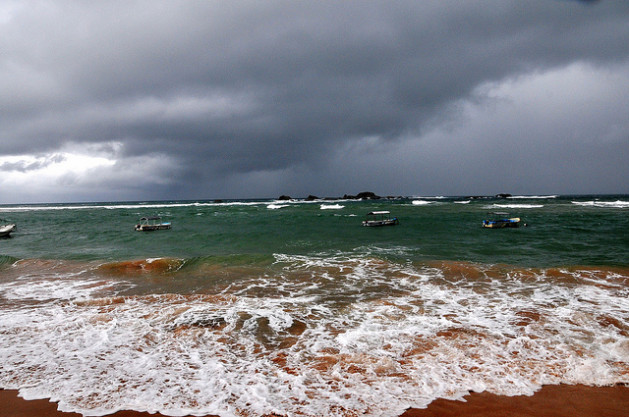 COLOMBO, Aug 20 2013 (IPS) - Gulam Rasul, chief meteorologist at the Pakistan Meteorological Department, was sure early this month that the second leg of the annual monsoon due in the latter half of the month was going to be bad. “Normally it peaks towards late August,” Rasul told IPS.

Even before peaking, the 2013 monsoon has been deadly. By mid-August, floods in Pakistan had killed more than 80 and left over 80,000 stranded, according to the Pakistan Disaster Management Agency.

Rasul says South Asian countries need to treat the monsoon with more respect than they do.

“It is vital for the region, probably the most vital annual weather event, and we need to be better prepared. It is at our risk that we take it lightly,” Rasul said from his office in Islamabad.

The monsoon has been erratic in recent years. Last year the monsoon failed in Sri Lanka, and parts of the country’s northern, eastern and southern regions went through a drought that affected at least 1.2 million people.

This year the monsoon has been above average. Rains have been lashing the country since June, and have so far caused 58 deaths and stranded over 17,000.

“We need to have a better understanding how the monsoon is changing and be better prepared,” S. H. Kariyawasam, head of the Meteorological Department in Sri Lanka said, agreeing with Rasul.

One of the effective means of achieving this is real-time sharing of weather information among countries in the region, experts say.

If such a scheme had been in place, it would have proved life-saving, according to Mandira Singh Shrestha, programme coordinator and senior water resources specialist at the International Centre for Integrated Mountain Development (ICIMOD) in Kathmandu, Nepal.

She told IPS that as the monsoon moved north from Sri Lanka into north India, information-sharing could have alerted national and regional weather authorities in India to take precautionary measures.

The fast-moving monsoon this year, assessed by some as the fastest in over four decades, ripped into Uttarakhand region in North India by the second week of June without any warning of its deadly potential.

By the time it left, more than 1,000 bodies had been recovered. Over 6,000 people are still listed as missing. The Uttarakhand region has been left in tatters. The region was full of pilgrims who had arrived just before the traditional rainy season when the monsoon burst above their heads. No one told them the rains were moving faster than usual.

“There is a need for coordination between the hydrological and meteorological agencies for providing timely and reliable forecasts,” Shrestha said.

At a meeting attended by regional and national experts organised by the Planning Commission of India on Aug. 13 to assess the aftermath of the Uttarakhand floods, the focus was at last on sharing information, and weather updates.

Experts at the meeting said that the trans-boundary nature of disasters made data-sharing essential.

Since 2005, officials from South Asian countries have been meeting just before the monsoon through the South Asia Climate Outlook Forum set up with the assistance of the World Metrological Organisation. This year’s meeting was held in Kathmandu, Nepal in mid-April.

When it arrived a month and a half after the meeting, the monsoon was moving faster than anticipated and was more potent than expected.

Such changes, according to Kariyawasam, are becoming a part of the increasingly erratic monsoon, whose pattern is proving hard to predict.

At the April meeting participants had agreed that detailed information on the monsoon as it moved inland could only be provided by national and regional weather offices. It was not, and it is this kind of update that Rasul and Kariyawasam want shared.

“What we need is a mechanism to do this,” Kariyawasam said. Both Sri Lankan and Pakistani officials say that one of the forums that can be used is the Meteorological Research Centre under the South Asian Association for Regional Cooperation (SAARC) based in Dhaka, Bangladesh.

“The SAARC platform can work better than a totally new one, because there is already a structure of regional cooperation in other areas,” Rasul said.

ICIMOD’s Shrestha told IPS that one of the models that can be adapted is the regional tsunami alert network set up after the deadly December 2004 tsunami.

“A new network of land-based seismic stations, deep water pressure sensors and warning centres have been developed throughout the region to provide early warning to the countries,” she said.

The effectiveness of such information-sharing was clear on Apr. 11, 2012 when an 8.6 magnitude undersea earthquake was reported off the coast of Indonesia. The Sri Lanka Disaster Management Centre (DMC) issued a warning within less than an hour of the earthquake, based on information received from regional networks.

More than 1,500 coastal villages from around the Sri Lankan coast were evacuated rapidly. According to DMC officials more than a million persons were moved to safe areas within hours of the earthquake.

“It is very difficult to track these weather patterns, especially when they are moving fast,” Kariyawasam said. “Given what we are faced with now, a regional network for information-sharing is essential.”