In this column, FAO Director-General José Graziano da Silva says the international community must harness a new sense of resolve to work together to tackle the causes of food price volatility.

Now that international food prices are declining and food commodity markets are calmer, it is time for countries to harness this heightened resolve to work together, using it to tackle the root causes of volatility.

Food price problems are far from over, and some regions, countries and communities are feeling the pressure more than others. The high and excessively volatile food prices of the last few years have caused disruptions to the global food system and undermined the efforts of developing countries to reduce hunger and poverty in a lasting and sustainable way.

Two recent international meetings pointed to the continued threat of volatility ­ the September meeting in St Petersburg of leaders from the G20 group of nations and the October meeting of agriculture ministers at the Rome headquarters of the United Nations Food and Agriculture Organisation (FAO), which also drew representatives of up to 130 countries. 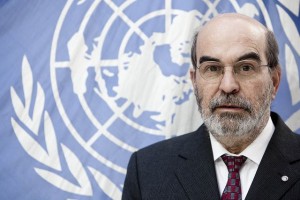 Participants in both meetings acknowledged the need to keep a close and continued watch over the agricultural commodity markets.

Improved global governance has already paid off, playing an important role in preventing the food price spike of July 2012 from developing into another potential crisis. The Agricultural Market Information System (AMIS) created by the G20 in 2011 proved effective, providing reliable information and increased transparency that helped to calm international food markets.

Still, there are a number of outstanding issues that require further examination, including food price speculation and its regulation, policies on biofuels, trade policies, and the potential role of public food stocks in managing price risks.

At the October meeting, ministers underlined the need for better regulation and transparency in commodity futures markets in order to limit excessive speculation and its effect on price volatility.

They also agreed that concrete and consistent steps are needed to improve sustainability in the use of natural resources, the production and consumption of food and the role that both can play in dealing with climate change.

A recurring theme in all these discussions was the need for policies and action to yield more inclusive, across-the-board access to economic, social, and policy-related benefits that reach the most vulnerable groups.

Protection of the most vulnerable groups from the adverse effects of sudden spikes in food prices should be a policy priority. In many poor countries, safety nets and social protection programmes need to be strengthened. This, however, should not overshadow the longer-term objective of increasing productivity in a sustainable manner and strengthening the resilience of production systems, especially in poor countries.

Decision-makers can actively support this process by keeping sustainable development ­ a necessary condition for lasting food security – squarely on the table in the discussion and design of policies and programmes related to production, trade and energy.

One such opportunity is the upcoming Ninth Ministerial Conference of the World Trade Organisation (WTO). Participants at the Dec. 3-6 meeting will look at, among other issues, compatibility between WTO rules and domestic support measures aimed at food security, such as food aid and food stockholding programmes.

On the sidelines of the conference, a FAO-organised session at the Bali Trade and
Development Symposium will engage non-governmental thought leaders in a discussion of trade and market policy interventions in support of food security, and lessons learned from such measures.

Whenever decision-makers gather at the international level, they open the door to an exchange of ideas and a chance to build consensus on crucial issues. Turning that opportunity into concrete, long-term improvements in productivity, sustainability and food security will ultimately hinge on how far they are willing to take the conversation and how successfully they can translate that talk into action at home.
(END/COPYRIGHT IPS)