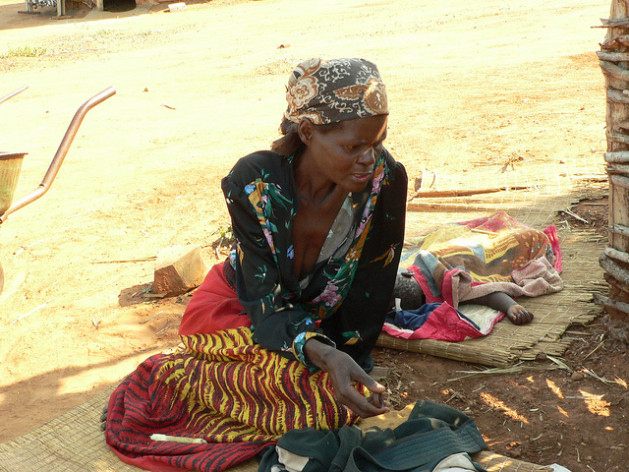 In Swaziland, which has been hard-hit by the AIDS pandemic, an HIV-positive mother sits next to her 18-month-old baby girl. Credit: Mantoe Phakathi/IPS

WASHINGTON, Dec 3 2013 (IPS) - The gap in health standards between the world’s poorest countries and the more advanced middle-income nations could close by the year 2035, according to a major new report published Tuesday by Britain’s The Lancet medical journal.

Written by a group of 25 of the world’s top global-health experts and international economists, Global Health 2035: A World Converging Within a Generation makes the case for the international community, governments and key donors, such as the Bill and Melinda Gates Foundation, to increase investments in health to meet the target.

“Now, for the first time in human history, we are on the verge of being able to achieve a milestone for humanity: eliminating major health inequalities, particularly inequalities in maternal and child health, so that every person on earth has an equal chance at a healthy and productive life,” according to Harvard University professor and former U.S. Treasury Secretary, Lawrence Summers.

“The powerful drugs and vaccines now available make reaching this milestone affordable. It is our generation’s unique opportunity to invest in making this vision real,” said Summers, who 20 years oversaw the preparation of the only ‘World Development Report’ (WDR) devoted to global health when he served as the World Bank’s chief economist.

The 58-page report, which calls for government policymakers to adopt a new approach to measuring the importance of health to their national economies, is being published as the Global Fund to Fight AIDS, Tuberculosis and Malaria – a unique multilateral agency that has approved 29 billion dollars in grants since its founding in 2002 – is meeting here this week to gain new donor commitments for its fourth three-year replenishment.

The three diseases are among the biggest health challenges faced by the world’s poorest countries and poorest people in middle-income nations.

The Fund’s leadership got a big lift here Monday when, at a World AIDS Day ceremony, President Barack Obama pledged continued U.S. support for the Fund, promising to provide one dollar for every two dollars committed by other donors over the next three years, up to a total of five billion dollars.

“Don’t leave our money on the table,” Obama said, speaking to many of the delegates who have gathered here for the pledging conference. “Now is the time to replenish the Global Fund.”

The Fund’s new executive director, Mark Dybul, said he was confident that this week’s pledging would significantly exceed the 9.2 billion dollars that was committed at the last replenishment in 2010.

The Lancet report offers what it calls a “roadmap to achieving dramatic gains in global health through a grand convergence around infectious, child and maternal mortality; major reductions in the incidence and consequences of non-communicable diseases (NCDs), and injuries; and the promise of ‘pro-poor’ universal health coverage.”

If followed, the roadmap could result in averting some 10 million deaths across the target countries in 2035 alone, according to the report.

It points to the experience of the “4C countries” – Chile, China, Costa Rica, and Cuba — as models for poor and lower-middle-income countries. All four started off at similar levels of income and mortality as today’s poor countries but, by 2011, had become among the best-performing middle-income nations.

Among the specific goals, according to the report, are reducing under-five mortality to 16 per 1,000 livebirths, and reducing annual AIDS-caused and TB-caused deaths to eight and four per 100,000, respectively.

To achieve these and other aims, the report calls for “aggressively scaling up” efforts to fight HIV/AIDS, TB, and malaria as well as improve maternal- and child-health conditions which were a major focus of the Millennium Development Goals (MDGs); strengthening health systems to focus on the most problematic sectors, including poor rural sub-populations of middle-income countries that are disproportionately affected by infectious diseases; and devoting more and earlier investment to family planning.

In addition, government should be encouraged to pursue fiscal policies – notably by heavily taxing tobacco and other harmful substances, such as alcohol, that can sharply reduce NCDs and injuries, as well as leverage significant new revenue for low- and middle-income countries that can, in turn be used to reduce subsidies on items, such as fossil fuels that produce air pollution which in turn cause NCDs.

Such savings will provide most countries with enough funds to finance many of the steps urged in the report. It thus urges that, while donor countries, which hopefully will include emerging economies, should increase their investment into research and development to produce new drugs, vaccines, and other health technologies.

The report calls for at least a doubling in health R&D from current annual spending of around three billion dollars to six billion dollars by 2020, with half of the increment coming from middle-income countries.

The report argues that the economic returns from investments in health are “much greater” than policy-makers have previously assumed.

The 1993 WDR found considerable evidence that improvements in health increased gross domestic product (GDP) per capita by enhancing childhood educational advances and adult worker productivity, as well as increasing access to natural resources and foreign investment that are encouraged by controlling diseases like malaria.

But the GDP analysis, the Lancet report asserts, measures only the impact of health improvements on economic productivity. It fails to capture the intrinsic value people place on their own improved health, including their greater life expectancy.

A full-income approach combines growth in national income with the value of additional life years (VLY). The report estimates that, on average, across low- and middle-income countries, one VLY – a one-year increase in life-expectancy – is about 2.3 times greater than per capita income.

Using that approach, the report found that, between 2000 and 2011, 24 percent of the growth in full income in those countries resulted from health improvements; that is, in VLYs gained. By the same token, setbacks to life expectancy, such as in countries hit hard by the HIV/AIDS pandemic, resulted in a far greater adverse impact than the impact on GDP per capita would suggest.

“We believe that if nations worldwide adopt a full-income approach to economic planning, the human returns to investing in health can be brought into resource allocation decisions,” said Dean Jamison, a University of Washington professor who co-chaired the Commission with Summers.

“People value a longer and healthier life, and the notion of full income simply places that value in monetary terms. While it does not put a monetary value on an individual’s life, it does place a value on changing mortality risk, which traditional notions of GDP neglect,” he added.